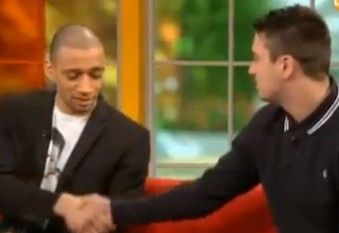 Curtis Woodhouse today finally got to confront the Twitter troll who hurled insults at him for eight months when the pair met for the first time on live television this morning.

Former English light-welterweight champion Woodhouse had tracked down the fool that had been abusing him online. The tormentor turned out to be James O’Brien who had been saying some real nasty stuff to the Sheffield boxer.

Today the ’embarrassed’ Twitter troll apologised on ITV’s Daybreak for abusing Curtis who ended up driving 70 miles to the troll’s street after the abusive tweets upset his wife and he thought enough is enough.

Curtis being the great guy he is, excepted O’ Brien’s apologies and replied; ‘It takes a big man sometimes to say sorry, I’ve done plenty of daft things in my time’.