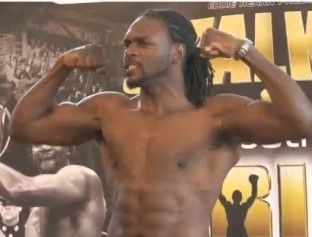 Heavyweight Audley Harrison says his latest quest for redemption is really the last, last, last chance saloon when he faces unbeaten American prospect Deontay Wilder on the undercard Amir Khan clash with Julio Diaz on the 27 April in Sheffield.

An Olympic gold medalist and former European champion Harrison will be looking to inflict the first defeat on the big punching Wilder, who has knocked out all of his opponents in a 27-0 career, 15 of them wins have ended in the 1st round and no one has yet extended ‘The Bronze Bomber’ beyond the 4th round.

It will be a tall order for Harrison in more ways than one, Wilder stands at 6`7″ – as a former Olympic bronze medalist , he has all the ingredients you would look for in a future heavyweight champion. A win for Audley would be a shock and half and would be considered has a massive upset, but the Londoner is well aware that a loss will most likely put paid to his boxing career.

“This is the door I must walk through,” said Harrison. “Lose and it’s over.”

“Deontay is a fast, dangerous puncher, but he has not been tested as a pro,” added the two time Prizefighter champion Harrison.

“Win and I’m in the top 10 for sure, eligible to challenge for the world title. Biggest risk, for the biggest reward – it can’t get any better than that.”

The hungry Wilder who will be fighting in the UK for the first time, fully intends to put an end to Harrison’s career and the KO artist is looking forward to showcasing his skills in-front of his fans in England, and didn’t pull any punches in his fight prediction and says he will show boxing why he is the future of heavyweight boxing. “I’m a starving lion that’s ready to eat.” said Wilder.

“On April 27, my next meal will be served and on the menu will be Audley Harrison. Bon appetite!

“For the many fans in England, Deontay Wilder is coming. You’ve been waiting for this moment and now it’s here. I can’t wait to show you guys why I am the light and the way for this dark division.”

Harrison will hope to survive the early rounds and Wilders big punches, where his experience could begin to tell in the latter part of the fight in territory that the American is yet to tread. Good-luck A-Force!