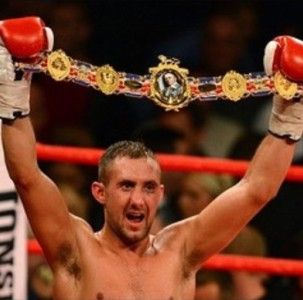 Jon Lewis Dickinson successfully defended his British cruiserweight title with a unanimous points decision over Mike Stafford at Rainton Meadows Arena on Friday night, but had to turn it on to tame an inspired challenger.

Stafford (now: 11-2, 2KOs) from Southport, made a positive start to the fight and was as good as is word; He had said before hand that he would, take the fight to the champion, and he did for the first 3 rounds. Dickinson was rattled by the inspired challenger and Stafford’s heavy early onslaughts were worrying for the champion and his home supporters.

But Dickinson (now: 15-2, 3KOs) is a good champion and improving with every fight, and the No1 cruiserweight in the country began to adapt to the pace and was able to switch the momentum in his favour, to take the upperhand. He started to stop Stafford in his tracks, planting his feet to land stiff right hands that hurt Stafford and made him think twice about coming in range.

Dickinson, 26, changed his approach from the fourth round on, and from centre ring used his superior boxing ability to dominate the rest of the contest, finishing strong to take the win.

It was a brave effort from Stafford and he can be proud of his efforts; He did particularly well to survive the 7th round, when Dickinson landed a big right uppercut that shook him to his boots. But he dug in and cheered by a loud travelling support from the Merseyside coast town, Stafford did himself proud and can come again.

The Birtley champion will look to make the next defence of his British title before the end of the year and a step upto European title level next would be a the likely route.

Prizefighter welterweight winner Glenn Foot stopped former European lightweight champion Jason Cook in the 7th round to enhance the belief that he is a welterweight ready to smash his way to the top of the British welterweight rankings.