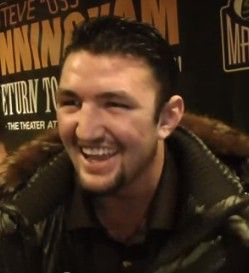 Manchester’s former amateur heavyweight star Hughie Fury, the 18 year-old cousin of Tyson, has his second professional outing on Saturday night on a stage he could only of ever dreamed about. High hopes are had for young Hughie, and you better believe it! Fury is every bit a prospect as his big cousin was, and then some.

Hughie (1-0, 1KO) started boxing aged 11 and won a Junior ABA title and signed off the vested circuit by becoming Youth World Champion in 2012. He penned a professional contract with Hennessy Sports and is trained by his dad Peter Fury, who also trains Tyson.

After a successful pro debut against David Whittom (KO2) on March 23rd in Canada,  on Saturday he will take on American Alex Rozman (1-0, 1KO) in a battle of two unbeaten 1-0 boxers. Having the fight at Madison Square Garden on the undercard of Tyson’s world heavyweight eliminator fight with Steve Cunningham will be shown live on channel 5 in the UK and will be great exposure for this exciting prospect. “I want to put on a good display” said Fury.

“It’s unbelievable having my second fight at Madison Square Gardens and having it shown live on Channel five with the whole world watching, its great I cant wait. All remember Hughie ‘Fist of’ Fury.”