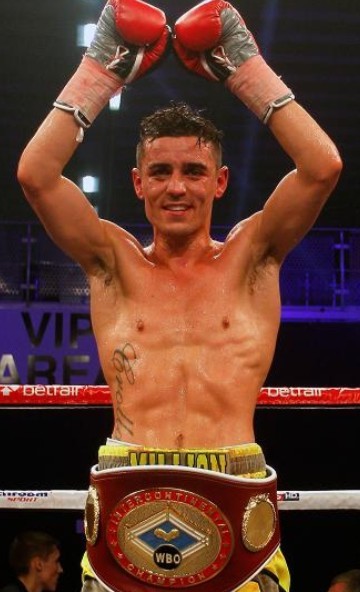 This fight was for the WBO Intercontinental Title, basically the two guys were fighting for a WBO ranking which would make it easier for Matchroom Boxing to set up the winner against Ricky Burns. Rumours before the fight also pointed to Rees preparation. Although quite a big favourite to win the fight, some at the weigh in questioned if the Former WBA 140 Champion has trained at 100% for the fight. Gavin Rees to his credit came out buzzing in Round one jabbing his way in and then landing flurries of body shots. Anthony Crolla was covering up well and seemed to be content boxing behind his high guard. Round two was the same, Rees throwing more, moving in and out and Crolla working the jab. Manchester’s Crolla then broke through in Round three as he timed Rees coming in no less than four times with left hooks. Rees work rate dropped as Crolla began to land his straight right also.

Crolla took the fourth as after a clash of heads Rees got cut above his left eye. Rees was now being pushed back by Crolla obviously worried about a premature end due to the cut. On my card Crolla took the fifth as Rees had a dishevelled look about him. Were those rumours true about Rees condition? It certainly looked that way as Crolla without doing too much easily took the round.

During the fight on the twitter network many online boxing writers and fans were unhappy about the commentary coming from the Sky team of Adam Smith and Glen McCrory. Many felt they were far to biased in favour of Crolla. I have to agree here as there was many times where Rees would land some nice punches but both commentators wouldn’t mention Rees scoring. When Crolla had success it was different as both Sky guys were quick to praise the Manchester man. As the fight hit the halfway stage Rees took the sixth as it looked like Crolla was now feeling the pace. Rees was quicker to the punch and was again landing some nice combinations to the body.

Round seven was Rees best round and he brought his straight right into play knocking Crolla’s head back on at least four occasions. Crolla’s only punch of note back was a straight right back. In round eight Crolla got his second wind, he was now throwing more and was able to keep Rees off him with his jab. This continued in round nine where the jab from Crolla was hitting its target more and more. The timing from earlier was back and it seemed that he was beginning to pull away from Rees again. In the last 30 seconds of the round both guys went at it hell for leather. The crowd went crazy for both fighters, great end to a very good round of boxing.

Joe Gallagher, Crolla’s trainer was wanting more and more from his man as the fight was close. It had been a busy night for Gallagher as he was in the corner before hand for Scott Quigg and Paul Smith who had both won on this Matchroom promoted show. Crolla responded in the tenth and eleventh round by continually beating a tired looking Rees to the punch. In the eleventh Crolla looked to have hurt Rees to the body. The Welshman took cover on the ropes as Crolla came at him trying to end the fight. Rees survived and somehow came out stronger in the first half of the twelfth round. Rees then began to clown with Crolla by using some old Naseem Hamed antics. Crolla though responded late in the round by again forcing Rees back to the ropes. Rees round but had the Welshman done enough to win the fight AND a shot at Ricky Burns Title???.

As expected the Judges scores were quite close. Steve Gray had the fight a Draw 115-115 but he was over ruled by both Ritchie Davies and Dave Parris who scored for Crolla 115-113 and 116-113 respectively.

Crolla now looks like he will get that title fight after a stirring underdog performance. Both Crolla and trainer Gallagher know it will be a tough fight against Ricky Burns and mentioned this in their post fight interview on Sky. Burns though will need to come through on Sept 7th against Ray Beltran for the fight to happen but going by what was said in Bolton last night, then the fight looks a certainty for late November early December.

Below is my scorecard for the Rees-Crolla fight followed by all the press/fans scores i was able to collect for this fight.