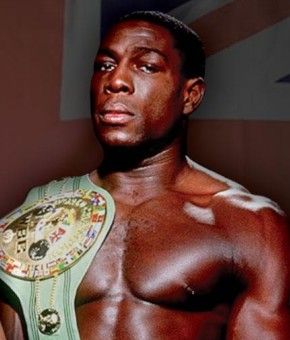 In The Ring With Big Frank Bruno: Four Legends Recall Their Rumble With The British Hero

As fight fans this side of the pond are only too aware, and proudly so: Frank Bruno is a national treasure. Every time Big Frank entered the squared circle to fight, the entire nation was behind him – or so it seemed. A true crossover star, Bruno became a household name after just a few pro bouts.

But what was it like to fight Bruno, and try and knock him out in front of his partisan fans? It must have been some daunting task for even a seasoned fighter to have to travel over to Blighty to get it on with the nation’s favourite son.

Here, four such great fighters recall the time they squared up with Bruno.

‘Bonecrusher’ Smith was far from enjoying household name status when he met Bruno in 1984, but the dangerous banger who was known to hardcore fans and experts alike made his name in style over here courtesy of a late-rounds KO that shocked the nation. Today, the born-again Christian remembers the fight well:

“Yeah, that was a big fight,” Bonecrusher says with a smile.

“He was like 20-0 or 21-0, something like that, and all [his wins] by KO. My trainer, Emile Griffith told me to keep going to his body. I was in tremendous condition for that fight, and so was he. Bruno was a good fighter, with a good jab and a right hand. (laughs) They had no judges if I remember correctly; just the referee. I knew I’d never have gotten a points win in England. That was a big fight and I knocked him out in his home town. My very next fight was for the title against Larry Holmes.”

Smith says Bruno was up there with the single hardest hitters he ever encountered:

“The hardest puncher I ever fought, besides my ex wife (laughs) would probably have to be Tyson. But your guy, Frank Bruno, he hit real hard too; as did Mike Weaver. I actually fought a lot of big punchers, guys who could stand up to my big punch. With Tyson, it was also his speed, and his combinations. But Bruno also threw pretty good combinations. Bruno’s straight right hand was a hard punch.”

Ribalta had seen better days when he came over to face Bruno in 1992, and today “El Nino” says Bruno used illegal tactics to beat him:

“Bruno was a good, strong fighter, with a big punch, but in our fight the referee should have taken points from him for hitting behind the head so often,” Ribalta claims all these years later.

“Look at the film; that’s how he stopped me, by hitting the back of my head. Bruno was a big puncher, no doubt about that, but he hit real hard behind the head!”

Ribalta capitulated inside a couple of rounds.

Another good fighter who, by the time he met Bruno in 1986, had been demoted to journeyman status, was James “Quick” Tillis.

Tillis, who went out in five, also says Bruno fought a rough fight:

“Bruno was strong but he was somewhat stiff, and clumsy. He wasn’t a fluid fighter. As a matter of fact, Gary Mason (who also stopped Tillis in the 5th-round) was a better fighter, with better combinations. I was putting it on Bruno real good until I got cut by a butt. But no hard feelings, I know I was past my best by then. Bruno was a brave guy.”

One man who lists his win over Bruno as his career highlight is Tim Witherspoon, who Bruno challenged, unsuccessfully, for the WBA heavyweight title that memorable summer of ‘86.

“Terrible” Tim, who stopped a gallant Bruno in the 11th-round, has nothing but praise for “Our Frank.”:

“I think that if Bruno had had my trainers, he’s have beaten me,“ Tim said last year.

“But he was too stiff and too heavily muscled. Also, if all of the English fans, and I mean all of ‘em’ had gotten behind him, maybe he’d have done better. But there was so much negativity aimed at Frank Bruno; from his own countrymen. That affected him I believe. He was a gentleman, Bruno – he called my hotel the day after the fight to see if I was okay.”

As fine an appraisal of Bruno as that is, Witherspoon – who plans to finally release his biography later this year – has an even more fascinating story to tell, about what happened after he’d KO’d Bruno. A certain Muhammad Ali came to his former sparring partner’s aid!

To a man, fans everywhere are surely in the know when it comes to what former street hustler and now promoter Don King did to Tim as soon as they both returned to the U.S. after the Bruno fight. Stung by a pay cheque for a little over a paltry $90,000, Witherspoon was shocked, disgusted and demoralised. This (and the fact that loser Bruno received a reported $900,000) is old news, but Tim is still aggrieved about it, as is to be expected.

But Tim has another story to tell about the Bruno fight; or it’s aftermath to be more precise. Witherspoon recalls how King had spent a great deal of money (thousands of dollars per day) to ensure the loyalty of a number of huge, towering minders. Apparently fearing for his safety more than usual as he was in London, King’s fears almost proved prophetic – were it not for an absolute boxing legend.

Witherspoon explained in detail how, after his KO of  Bruno, he, King, King’s step-son Carl and his trainers, were inside the dressing room, with many, many angry fans doing their utmost to smash down the door and do God knows what once inside.

“I was scared, we all were,” Tim shared with me.

“These fans were really trying to knock that door down and get at us. Some were drunk and real mad!”

With no escape and with the door’s protection fading by the second, “The Greatest” Muhammad Ali stepped forward.

“Open the door,” Ali demanded of the security men in attendance.

Finally, according to Tim, the door was opened but, as the mob attempted to pile in, they were met with the sight of arguably the most-loved and most revered fighter in all of boxing! Ali raised his hands and simply asked the fans to stop. This they did. Instantly! All the love, respect and adulation they had for Ali ensured that all their anger and falsely placed patriotism vanished.

Witherspoon says he was awestruck at the absolute power of Ali’s presence. So, the WBA champ, King, Tim’s trainers and others were all spared what could well have been a nasty ordeal. Whether or not King was as grateful as Witherspoon was, we will never know!

It was on the way back to the hotel in London that Ali whispered into Witherspoon’s ear how he knew Tim was “getting robbed.” Witherspoon said he thought Ali was joking at the time, yet realised all too painfully that he wasn’t when his pay cheque arrived in the mail.