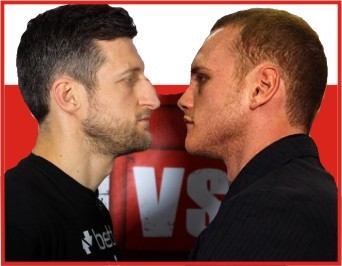 George Groves has revealed he is in talks with Carl Froch and on the verge of securing an All British super-middleweight world title showdown with ‘The Cobra’ adding that he is close to completing the deal, which could be completed in the coming weeks..

The undefeated Londoner has been made the mandatory challenger for Froch’s IBF super-middleweight title but there were suggestions the champion could vacate the title in order to secure a rematch with American Andre Ward.

However, Froch has said he would never vacate one of his belts, instead of face his mandatory and has made it clear in recent days that he would be prepared to step in the ring with his domestic rival. So with the champion giving the meeting his seal of approval verbally, it looks likely that Groves is close to securing his first world title fight.

“Once you are mandatory you are guaranteed to fight for a world title. Whether Froch takes the fight; vacates or I go down another route, as I’m ranked with all the other governing bodies as well, my next fight will be for a world title. But I want to fight Carl Froch,” Groves exclusively told IBTimes UK.

“Hopefully I’ll speak to Eddie Hearn and he can get it signed, sealed and delivered sooner rather than later. I think we are close to doing a deal as that is the fight that I want.

“I bring significant value to a fight with Froch. He is a good fighter but he’ll only be in big fights with the right opponent. He’s not a standalone fighter.

“I don’t think another Kessler fight would happen this year. Andre Ward has gone quiet and to be honest it wouldn’t sell that well so the next biggest fight out there is to fight me.”

The 25 year old last boxed on the undercard of Froch’s epic win over Mikkel Kessler and there was said to be some bad blood between the pair after Groves helped the Dane prepare by taking part in sparring on the eve of the May bout.

With tensions mounting you might want to head over to freebets.org to see how the odds are starting to stack up between the two Brits.

With Froch now suggesting he is unprepared to give up his IBF crown it seems likely that Groves will get his opportunity later this year and the Briton believes he is ready to take the title away from the man who is 11 years his senior.