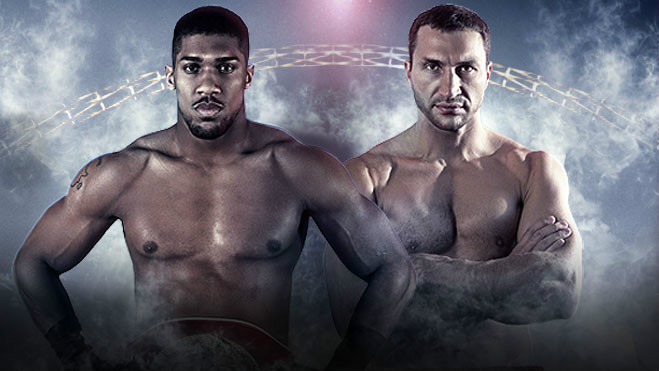 You have be careful when staging a procession, if something goes wrong it can go wrong spectacularly and on the biggest stage. Tonight’s IBF, WBA World and IBO heavyweight title showdown between IBF holder Anthony Joshua (250lbs) and former Champion Wladimir Klitschko (240¼) was presented as a passing of the torch ceremony, a chance for the Londoner to demolish the aging former holder in front of 89,999 fans at Wembley Stadium (Carl Froch is the minus one, he decided to attend on a press pass in a last-ditch attempt to bring that figure closer to 89,999).

In 2002, then-WBO title holder Klitschko fought back-to-back fights in the U.S. for the first time in his career, stoppage wins over Ray Mercer and Jameel McCline (W TKO 6 and RTD 10 respectively) and then headed to Germany for a defence against Corrie Sanders, it was seen as something of a mini-homecoming after staking his Stateside claim with the brace of wins.

Klitschko was emerging as the heir apparent to Lennox Lewis due to the fact that Lewis had recently beaten Mike Tyson and was in the process of winding his carer down. He overcame Vitali Klitschko by sixth-round facial evisceration later that same year to draw a line under his reign. A win for Klitschko over the still dangerous Sanders would have been another marker for the WBO holder as we entered a post-Lewis landscape.

The build-up was all pomp and ceremony—even Klitschko’s hair looked a more pompadoured and regal that night—while his gold lined red dressing gown called to mind an inversion of the outfit worn by Roman centurions. It was big, it was bold—the Fourth Reich as directed by Gore Verbinski—and it was over earlier than expected as Sanders flipped the script with a series of rapid, powerful left hands. Down four times, stopped in two and his career in tatters, Klitschko had regally strolled to the ring as a prince eying the king’s crown only to face a massive rebuilding job.

Emanuel Steward was belatedly brought in to shore up his defence, which would later prompt lazy comparisons to the work the Detroit-based legend did with Lennox Lewis. However, the effect was not as immediate as Klitschko blew a gasket in his first fight under the legendary trainer—a fifth-round TKO loss to Lamon Brewster in 2004 in which he threw 311 punches and landed 120 before fading dramatically to hand Brewster the upset win.

Wlad, though, got to grips with the new nuances imparted by Steward by 2005, winning a decision over Samuel Peter despite suffering three knockdowns to get back into title contention. On that night, the Ukrainian threw 523 shots, landing 204 en route to a deserved win.

After being served up IBF Chris Byrd in his next one, “Dr Steelhammer” prevailed via a seventh-round TKO—throwing 265 with a 117 yield as he picked up the IBF and vacant IBO titles. History fills in the gaps, Klitschko presided over the division imperiously until being out-foxed, boxed and out-pointed by Tyson Fury in November 2015, but his cautious, safety-first style often prompted complaints that his style was too anodyne for the sport’s premier division.

Unlike Lewis, Klitschko never mastered the mastery of the moment, knowing when to come out and blitz a potentially dangerous foe, as Lewis did against Andrew Golota (W KO 1) and Michael Grant (W KO 2), sealing a legacy defining win, as he did versus Evander Holyfield (W12) and Mike Tyson (KO 8), and getting through an unexpected give-and-take battle, his 10-round MD win win over Ray Mercer in 1996.

In his first fight under Steward, Lewis boxed cautiously early against Lionel Butler and registered a controlled fifth-round TKO, a reversal of the old one-two taking the big hitter out. “He is no Mike Tyson”, said Don King when reflecting on Lewis’s performance, which was music to the hears of Lennox’s followers—he would become something more than Tyson by the time he closed the book on his career as he could both attack and defend.

No, Klitschko’s record doesn’t have a real punctuation, point proving, performance that will pass the test of time. Indeed, he missed two recent opportunities when out-pointing David Haye in a display that was workmanlike—Klitschko threw 509 punches and landed 134 shots. Against Fury, he threw 231 and landed only 52, a steep drop off from his usual 500 or so punches per fight.

Age, economy and not to mention the fact that Fury played him mentally and performed at his peak physically on the night itself all played a part in what looked like a steep decline for the soon to be former Champion, but did Fury also lay down a second blueprint to beat Klitschko by employing lateral movement, punch picking and a bit of bravado? And could Joshua, who carries more bulk, do the same thing by trying his luck early, then adapting if the need arose, limiting his punch output to save his strength in a bid to take a decision win or late stoppage?

Going in, the fight that came to mind the most was David Haye’s 12-round decision win over Ismail Abdoul here in Manchester in 2006, “The Hayemaker” limited himself to a strict number of shots per round against a man who later proved to be a tough nut to crack. Haye had not been past eight rounds going into the European cruiserweight title defence; he got 12 under his belt that night and although his career never hit the heights his talent deserved he benefited from a performance, and fight, that led to boos on the night.

Yet to hear the bell for round eight in his career going into tonight’s fight, Joshua must have felt that if he didn’t take Klitschko out early—and it was a real possibility given that he lacks the more fluent punching style of Sanders—then he would either have to do a Brewster on the aging fighter or box to a plan with a set number of punches in mind for each round just in case he had to go the championship route for the first time. If he opted for a boxing performance, Joshua would run the dual risk of boxing to orders and failing to net the KO win that his crowd craves.

On the other hand, Klitschko must have hoped that Joshua would come on strong, leave plenty of openings, and he does, and hand the former Champion the chance to up his punch rate from the Fury loss and do some real damage.

After what seemed like an age of pre-fight pomp, circumstance and déjà vu it was time for everyone but the particulars to leave the stage so that Joshua and Klitschko could throw down a holding pattern on what is once again a fractured heavyweight division due to Fury’s layoff.

As expected in at least one quarter, this one, the two fighters fought with a moderate work rate in the early going—a cat and mouse game between a nippy, younger mouse and the cagey old cat. Klitschko whipped a few clipped shots in early in the fourth, catching Joshua unawares and serving notice of his greater experience.

Youth prevailed, though, as Joshua came out blazing in the fifth, flooring Klitschko in the same round that Brewster dropped and stopped him. Wlad wanted to make history, but history seemed to be repeating itself only for the former Champion to wipe away blood from a cut right eye to turn the tide as the round, and Joshua’s pep, ebbed to its conclusion.

With the Brewster flashback in his rear view mirror, Klitschko came out for the sixth reborn, flooring Joshua with a huge right hand after settling into the session.

Despite beating the count, Joshua looked leaden going back to his corner at the close of the round, his muscles looked like so many heavy barnacles adorning his body and robbing him of his oxygen—a knockout seemed to be calling.

If Klitschko was the lion in winter, Joshua was the lion in spring, hoping to net a victory that would spring him into the upper echelons of the division and into a potential showdown with Fury, who continues to cast a shadow over the heavyweights. Both men retracted their claws, though, in a sedate eighth, perhaps holding something in reserve for the crucial Championship rounds, waters as-yet unexplored by Joshua.

London may be Joshua’s manor, but Klitschko has always been at home in the latter stages of a fight, the Fury one excluded, and he navigated his way through the stretch by probing, holding and popping when required.

Joshua, though, was not done, throwing shots early in the 11th as Klitschko wheeled backwards, which handed the IBF holder the chance to gobble up the pace. Although not as suspenseful or skillful, it hearkened back to the first meeting between James Toney and Mike McCallum: Toney was younger, a puncher and carried his power well late in the fight to grab a draw from the jaws of defeat.

Joshua went one further, flooring Klitschko twice in the 11th to dig his way back into the fight. Then a series of unanswered shots prompted referee David Fields to intervene.

So while it wasn’t the fight many expected or predicted, both fighters proved a few points. Klitschko should have been more Lewis like in his career, Joshua may prove to be, but he will need to call on Fury to settle domestic scores.