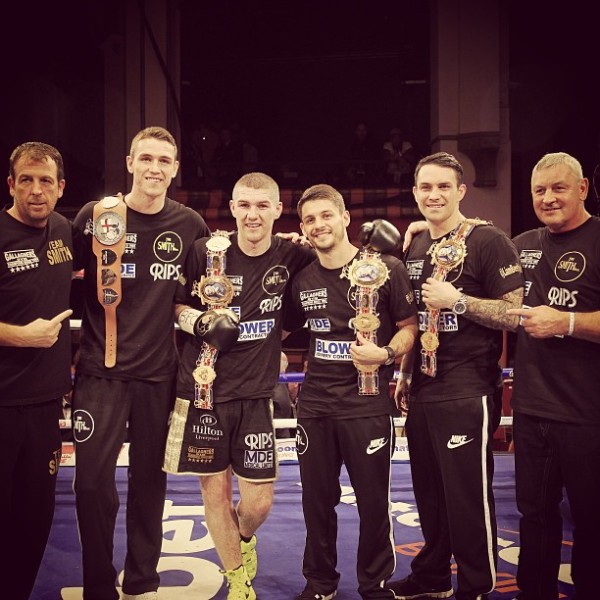 The four Liverpool Smith brothers are a unique set of boxers! Paul, Stephen and Liam are currently all British champions in their weight classes and youngest of the siblings Callum is an English champion and one of the hottest properties in British boxing, who has won his last six fights in the opening round becoming the first boxer to do so.

All brothers were very successful amateurs and products of the world famous Rotunda ABC in Liverpool, all are now coached by Joe Gallagher, one of the most dedicated coaches and successful in recent times. Paul, 30, and 28-year-old Stephen currently hold British titles at super-middleweight and super-featherweight respectively.

Twenty-five-year-old Liam last week helped the Smiths create boxing history when he outpointed Erick Ochieng to claim the vacant British light-middleweight title, the first time in British boxing history that three brothers have held three British titles at the same time. Add to that the fact baby of the bunch Callum stopped Patrick Mendy to take the English title, it really does make you think if we will ever see the like again in our lifetime?

But they haven’t finished yet and wont be resting on any laurels, all have big fights ahead and success breeds success. To see one or more of them fighting for a genuine world title in the next few years will be fantastic, these lads are a credit to boxing, and any youngens looking to get into the game should look no further than the Smith household for the perfect role models.

The siblings get the chance to make more history and in their home city, they will all feature at the Liverpool Echo Arena on Saturday 7th December when they will all be defending their belts, the first time that has ever happened. (update, it is unsure if Stephen now will feature on this show, after he announced his split from Frank Warren)

Paul, who defeated rival Tony Dodson in June to win the belt for a second time, will make the first defence against Accrington’s Luke Blackledge, with the chance to win the Lonsdale belt for keeps. He said, “It’s incredible that we are all holding British titles at the same time, it’s not something that we set out to do, but it’s unbelievable that we are now all holding prestigious Lonsdale belts.

“As the eldest brother I’m so proud of what Stephen, Liam and Callum have achieved

“Personally, I’m proud to hold my British Super-Middleweight title again it’s a beautiful belt and now I’ve got to defend it against a tough challenger in Blackwell on a very special night.”

Stephen is set to make the first defence of his British Super-Featherweight title he won in dramatic fashion when he knocked-out Gary Buckland, when he takes on former champion Gary Sykes in an intriguing contest. ‘Swifty’ won his title with arguably the best punch seen in a British ring this year when flattened a solid champion in Buckland with one perfectly timed uppercut to become a two weight British champion.
[sam id=”1″ codes=”true”]
.
Liam will defend his British Light-Middleweight title for the first time against an opponent yet to be announced. Liam’s fight against Ochieng was a furious, all-action battle and now he’s focused on making a quick first defence. He said: “Beating Ochieng on Saturday and holding the Lonsdale belt felt like I had won the world title on the night.
“I’m so proud of my brothers and we’ve all stuck together through thick and thin to now be British champions.”It’s all about hard graft and dedication and we’ve shown that. We all want the best for each other and now it’s about retaining our titles at the Echo Arena and then moving on to world titles.”
.
Callum will look to make a defence of his English strap. Aged just 23 and standing at 6ft 3 ‘Mundo’  is really looking the part and looks destined for big things, he could yet turn out to be the best of the lot. At 6ft 3 he is very tall for a super-middleweight and has a good advantage against his opponents. But what makes him exciting is that he can bang and isn’t afraid to finish off an opponent when he has them hurt. He is a very well schooled amateur and has all the tools, temperament and support to be a boxing star.
.
Below is a selection of recent interviews we did with the Smith brothers just before they had this success and became champions.

Paul Smith Jr. started boxing when he nine at the famous Rotunda amateur boxing club in his home town of Liverpool with Jimmy Albertina and Mick McAllister.
From a very young age Paul became hooked on boxing after watching the old fights with his Dad Paul senior who was a big fight fan. The ‘Fab Four’ Hagler, Leonard, Hearns and Duran and then Mike Tyson were the fighters that captured his imagination. All he ever wanted to be was a boxer and when asked by his career tutors what his preferences were? There was only one box filled in with the word ‘Boxer'”

In this interview; video above; Stephen speaks about his career, how he got into boxing, memorable gym moments and reveals to us who his current favourite British boxer is and who is his favourite boxer of all time.

Former British and Commonwealth featherweight champion Stephen Smith talks to BritishBoxers about winning the titles against John Simpson and then losing them against Lee Selby and how he longs for the day he meets the Welshman in a rematch to seek revenge. Stephen talks about winning back his treasured Lonsdale belt.

Liam Smith talks about getting into boxing and winning the Commonwealth tile, he speaks about the future and his dream of winning a Lonsdale belt a vision he was soon to realise.

Callum ‘Mundo’ Smith is the youngest sibling of the Liverpool fighting Smith brothers and if you listen to some respected voices in the boxing game; they will tell you he is the best of the lot in terms of talent and potential, and the first people to tell you that are his three brothers.

Callum a former GB team member had a decorated amateur career accumulating in him winning a commonwealth games silver medal in 2010 and was unlucky not to have competed at London 2012 after crashing out in the qualifiers.
Needing to reach the final of the 81kg division at the last European qualifier in Trabzon, Turkey in April, Smith was defeated at the last four stage.Despite controlling the bout and appearing to land more scoring shots against Azerbaijan’s Vatan Huseynli, Smith lost 16-14 at the end of the three rounds.
[sam id=”1″ codes=”true”]
Had Huseynli beaten home fighter Bahram Muzaffer in the final then Smith would still have qualified but the Turk won 18-12, leaving the Liverpool man’s Olympic hopes in tatters. To add insult to injury, Smith’s hopes of claiming a ‘wild card’ entry in the summer Games were dashed when Montenegro’s Bosko Draskovic a man Smith had beaten by 10 points was handed the invitational place for 2012.
Disappointed with the amateur code, the 22-year-old decided to follow his brothers and his ultimate dream and in November last year has his first professional fight after signing with Eddie Hearn at Matchroom and has now had 3 wins and with 2 more fights set for March and April he hopes to be a busy fighter and in recognition for domestic titles at super middleweight this time next year.
The former Rotunda ABC boxer will become the fourth of the Smith brothers to move into the pro ranks, joining Paul, Stephen and Liam and like them is being trained by renowned Manchester coach Joe Gallagher.
In this Interview with British Boxers ‘Mundo’ talks to us about his boxing career and tells us how he got into boxing, what motivates him to succeed, who is favourite boxer of all time is? And being the youngest of the boxing Smith’s.
[sam id=”1″ codes=”true”]