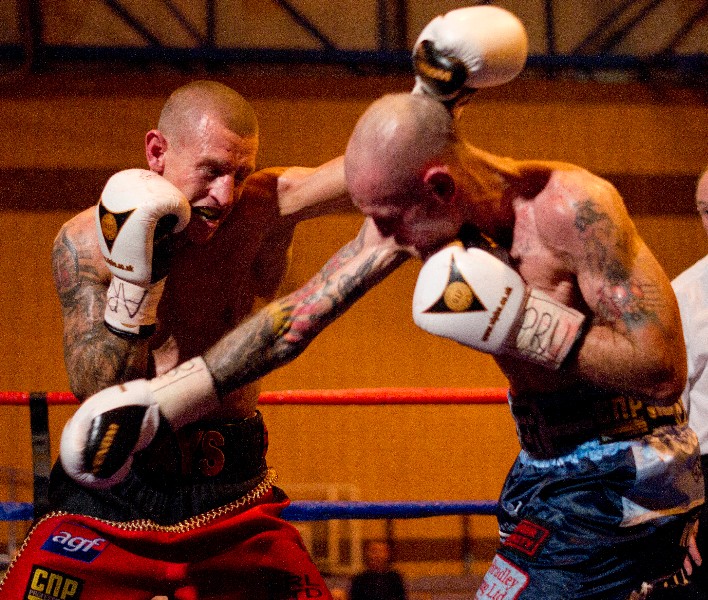 It proved to be third time lucky for Kays in terms of challenging for domestic title belts. He  lost to Gary Sykes for the same title in April, and in 2011 suffered a Commonwealth title defeat to Liam Walsh, but against Hooper he was inspired. In great shape, Kays fought a determined fight to finally get his hands on a belt he has worked so hard to get and he wouldn’t be denied this time.

Hooper had made a lively start and took the fight to his opponent, but Kays fought fire with fire and the pair put on a good hard fought contest for the fans. Hooper suffered a cut to his right eye in the third round, and Kays landing good shots and more often, working well off the jab. The fight flowed backwards and forward and both had various success, but it was Kays (17-3-1, 4KOs) who always looked more in control and focussed and he tipped the rounds that were close and then pulled away in the later rounds finishing strong to take the belt.

For Kays, 30, this win signals a real turn around in his career, after he turned his back on the game, changed trainers, lost two big title fights and has had a torrid nine months of personal problems and being crowned English champion was an emotional relief for the Mancunian battler.

“Having my arm raised by the ref felt absolute brilliant.” Kays told www.britishboxers.co.uk All the hard work put in was worth it just to hear them words ‘And the New!’ just for them few seconds.

“To be honest I don’t think it was a close fight, I gave hooper the first round and I don’t think I dropped a round from the second onwards. He was a good kid but I think my boxing brain and strength was to much for him. It got nasty in there at times because he bit me in the first round on my shoulder and then bit my ear in the second and I just wanted to smash his teeth out but Darren got hold of me in the corner and told me I had to keep my cool which I think I did, I new I had him where I wanted him, frustrated because that’s when a fighter makes mistakes, when frustration sets in!”

Kays retired from boxing in 2011 after a draw against Pavels Senkovs in December 2011, he sights falling out of love with the game and the plumber went back to his bread and butter job and was done with boxing.  He decided to come back with a different boxing team after leaving long time coach Bobby Rimmer. Jon and Bobby have not gone their separate ways on good terms and that is something Kays says he hopes he can one day address with Bobby.

“I’m now being trained by Darren McCarrick at Boarshaw Gym in Middleton.” said Kays.  “I’ve known Darren for quite a few years, he trains my friend Warren Tansy.

“I’ve had a terrible nine months since January with personal problems going on in my life but I’ve got a good family and a good team around who have helped me massively and this win and belt was for them.

“The defeats to Walsh and Sykes even though I lost them, helped to build my confidence up and they gave me a lot of experience.” explained Kays.

“I’d like to thank my Mum and Dad for all the work they have put into me in my career and also my trainer Darren for everything he does for me in and out of boxing and in helping me turn my career around these last 18 months.

“I retired from the sport for six months after the Senkovs fight, I just felt out of love with the sport, but after a few weeks out I knew I had more left and I was missing it, the training the buzz of being in a boxing gym. I knew that if I finish, then  in a couple years I regret the decision I made because I knew I could of achieved more.

“So I said that if I was gonna come back, I’d come back with a new look and a new team to get some fresh new ideas and injection into my career which it needed.

“Me and Bobby don’t speak any more which is a shame as I really like the man and I owe him a lot, I hope to shake his hand sometime in the future.

I asked Jon, what does the future hold? What would like to do next in your career and what do you hope to achieve overall in the game? “I’d like a defence of my English title and then to keep building on that, maybe try to get an Inter-continental title and build my way to a British title shot.

“Since I started boxing at ten years-old, all I’ve ever wanted was to win a Lonsdale belt, and I wont stop till I get one I’m very strong willed and dedicated and that’s what you need to get to that level. My granddad told me that if you want something bad enough and you work hard, you will get it! That’s been my motto since I started boxing and I’m gonna get it!” added ‘2 Smokes’

Continue to the next page for the Terry Flanagan vs Michael Grant fight report, plus the undercard results from Oldham.