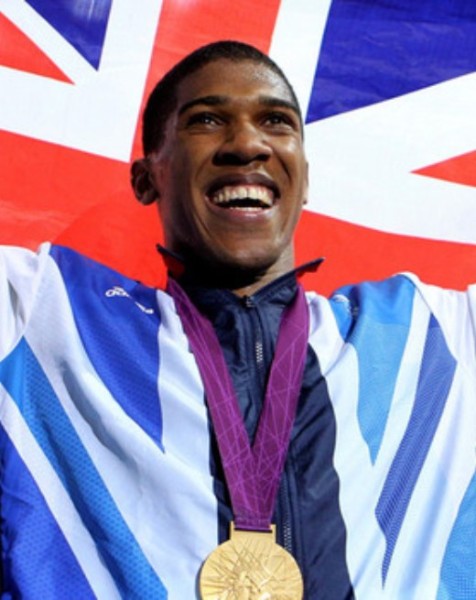 With only two fights behind him, both quick knockout victories, Anthony Joshua the Olympic Gold medallist at London 2012, looks like the perfect 21st century archetype heavyweight, with a future as bright as his smile, a smile that when he steps through the ropes turns to a uncompromising serious game scowl.

I guess there are a few seasoned pros and other contenders who are gulping at the thought of one day having to face this finely schooled, powerful heavyweight force who has entered the professional ranks with the hair of a Gladiator and the physic, power and stature to go with it.

Promoted as ‘The Peoples Champion’ boxing didn’t come into Joshua’s life until relevantly late on, considering the success he had in the amateurs reaching the pinnacle he did, but it took an altercation with the law, to finally put him on the road to achieving his pugilistic potential.

He eventually took up boxing seriously when he was aged 18, when his cousin encouraged him to go down to the local boxing club and his life was about to change. He went on to win the English ABA 91+kg title with ease, quickly catching the eye of GB selectors.

Despite his amateur ring success, life still wasn’t 100% boxing and in 2010 he was sentenced to a 12-month community order and 100 hours of unpaid work for the possession of cannabis. He was banned from fighting by the boxing authorities and it proved to be the turning point in his life and boxing career. The young Joshua had ambition to be somebody, he was ambitious to be a success in life one way or another. But being deprived of boxing, while banned, made him realise how much he loved the sport. He was required to help elderly people on an allotment in north Finchley for 6 days a week as part of his community service, while working the spade and wheelbarrow, it gave him much time for reflection and contemplation and his mind became set on where his future lay.

He decided the way to be somebody and do something in life was using the talents he had as a boxer and his future was set and he’s never looked back, going on to be picked for the GB squad, winning Olympic gold and now set to make his living from the hardest of all professions.

During the 2011 World Amateur Boxing Championships in Baku, Azerbaijan, he marked his sudden arrival on the world stage by defeating reigning World & Olympic champion Italian Roberto Cammarelle, and went on to stop Erik Pfeifer of Germany in the semis before losing by just one point to local boxer, Magomedrasul Majidov. En route to the final, Joshua secured his place at the 2012 Olympic Games in the 91kg+ division as a relative new-comer to the elite level of the sport.

He went into the 2012 London Olympics as a novice on the international scene, despite being a world silver medallist. He received a very hard draw in the last 16 of the super heavyweight event, in Cuban Erislandy Savon, ranked number 4 in the world by AIBA and nephew of the three time Olympic champion, Felix Savon, he was favourite to take the win. The British hope battled through three tough rounds in his opening contest before being given the result 17:16. This decision caused some controversy with some observers believing Savon had clearly won the bout whilst others taking the view that he had won on merit. In his next bout Joshua took on he 2008 Beijing Olympic silver medalist, Zhilei Zhang dropping his taller opponent in the middle round, Joshua won by 15:11 guaranteeing at least a bronze medal.

In the semi-final he met Kazakhstan’s, Ivan Dychko, but despite Joshua’s height disadvantage he won by 13:11 victory gaining a place in the Olympic final. Joshua met 32-year-old reigning Olympic Champion and former twice World Champion, Roberto Cammarelle of Italy in the closing bout. After conceding the first round to Cammarelle, a man he had already beaten the previous year, Joshua grew into the fight and fought back to level the scores after the third round, Joshua was eventually announced the winner via count-back and the new Olympic champion.

After the games another honour was presented to the over night hero when he was appointed a Member of the Order of the British Empire (MBE) in the 2013 New Year Honours for services to boxing.

Now 24, Joshua who stands at 6ft 6in and 18 stones of pure ripped muscle, turned professional with Matchroom on 24 July 2013 and made his professional debut on the 5th October, scoring a first round KO win over unbeaten Italian prospect Emanuele Leo at the O2 Arena in London. His second professional fight was against Melton Mowbray’s Paul Butlin at the Motorpoint Arena Sheffield on 26 October. The bout was stopped in the 2nd round when the referee decided Butlin was taking too much punishment and declared Joshua the winner by TKO. In both of these fights he has barely broke a sweat.

Matchroom promoter Eddie Hearn has already got him another three contests lined up. On Thursday night (November, 14th)  Joshua has his third professional fight against Croatian Hrvoje Kisicek at London’s York Hall in Bethnal Green on the Prizefighter UK v USA Tournament. Then next week he appears on the undercard of a massive bill when Carl Froch defends his super-middleweight titles against British rival George Groves in Manchester.  On December 14th Joshua will finish the year when he takes on Aberdare’s Dorian Darch in a fight that will be a good yard stick to judge his progress. Darch’s two defeats came against Ian Lewison (TKO4) and in his last fight in September he dropped a 6 round points decision to another unbeaten British prospect, Hughie Fury.

Keeping Joshua busy will be important to his development and watching this exciting talent progress, will be very interesting indeed. British boxing have another heavyweight prospect to sit up and take notice of. In the ring, fans are starting to get excited and there is an expectation, being an Olympic gold medallist there always will be. Out of  the ring he is a role model and inspiration to those who seek a different path in life, but his shoulders seem big and strong enough to take on the role and cope with the high expectation and promise bestowed on him.

Follow the Anthony Joshua story here…. To be continued…