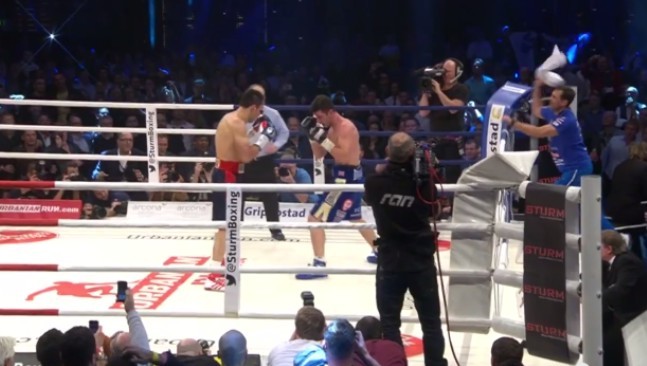 Barnet’s Darren Barker sadly lost his IBF middleweight title to Germany’s Felix Sturm at the Porsche Arena in Stuttgart on Saturday night, when his corner threw in the towel in the 2nd round to end the fight, after Barker suffered a dislocated hip that made it impossible for him to continue.

That opening paragraph doesn’t quite tell the story of the fight though. Barker had been knocked down twice in the finishing round by an inspired challenge from the outstanding  34 year-old Sturm. The German dominated from the start, after both boxers got into range from the opening bell and let the punches go, neither looking to submit ground. But it was Sturm who looked to have the greater strength and power and his shots had Barker rocking and he did well to get through the first round.

The champion bravely got up from both knock downs, the first being a shot around the back of  the left ear, that had effected his balance and Barker found it hard to get control of his  legs as they stiffened. On the second knock down you could see something other than the punches were causing him distress.

The Londoner signalled to his corner that something was up, and when he rose, this time he was limping, the hip had gone! The fight continued and Barker got his hands up and stood with Sturm for a punch out, that’s all Barker could do at this point. Sturm capitalised and his shots had venom, they were rocking the static champion’s head back and his trainer and good friend Tony Sims passionately threw in the towel to end his man’s misery.

Later it came to light that Barker felt his hip going in the first. The one thing that stood out and summed up Barkers night and you could say his career was that when the towel came in and the referee stopped the contest, he was still fighting back with all he had and landed the fights final punches! He has had a life and career of fight backs, he has risen up from the depths of pain, despair and heartache to reach the pinnacle of a sport, he had embraced as a child.

Link: Barker wins the world title and dedicates his victory to his late brothers memory.

Barker, 31, has suffered from injury problems throughout his career and has had the said hip operated on to try and rectify a problem he was born with. At one point due to these  injuries, Barker had retired from boxing, which made his world title winning achievement in  light of that, all the more rewarding.

Barker won the world title in his second attempt in August this year, when he defeated the man who had dethroned Sturm previously in Daniel Geale. Sturm becomes a four time world title holder, the first German boxer to do so and what an achievement. For Barker, according to his trainer Tony Simms, this could be the last time we see him in the ring; “It’s a disaster – you’ll probably never see him in the ring again.” Simms told SkySports after the fight.

“His hip went in the first round when he threw a right hand. He came back to the corner and said ‘I think it’s gone, it’s hurting me’.

“In the second round he got clipped with a shot and – I don’t know what’s happened – it’s completely gone on him. I was hoping it would just be a muscle injury but when he went down the next time I threw the towel in because I knew he couldn’t move.

“He’s had problems with his hips before and they’re just not right. He’ll have an X-ray at the hospital and we’ll see what’s happening from there.”

Barker came close to retiring for good after his world title defeat to Sergio Martinez in October 2011, and his promoter Eddie Hearn reckons it is a “miracle” he returned to win the IBF belt against Geale.

Hearn said: “With Darren Barker every fight is a bonus because his body has gone through the wars. To even get four fights out of him after he came back was a miracle.

Barker is entitled to a rematch with Sturm before the end of next summer, but Hearn added: “If it’s as bad as we think it is I’m not sure he’s going to be involved in the rematch, and if he’s not involved in a rematch I would suggest that would make his decision for him.”

Today I’m sure there are no words to be found that can console ‘Dazzling’ Darren Barker, losing the title and status he had worked so hard to get, must be more painful than the inflamed hip. But he has nothing to be down about in terms of what he has given to the game and how he has represented British boxing for so many years, if Saturday night was the last time we see Barker in the ring, then what a crying shame, but it will take nothing away from his achievements and he can rest assured his place in boxing history is secure.