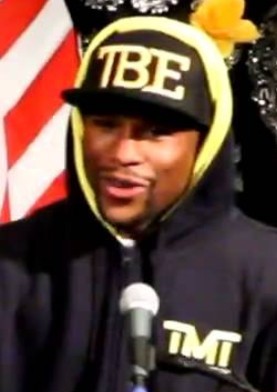 Mayweather explains why he snubbed Khan for Maidana

Floyd Mayweather says he chose next opponent Marcos Maidana over British boxer Amir Khan for his next fight on May 3rd, because he is the boxer on form and ‘the better man’

It seems at one point the undefeated Mayweather (45-0, 26KOs) couldn’t make up his mind and needed to ask his fans who he should fight next out of Maidana (35-3, 31KOs) and Khan (28-3, 19KOs). The worlds No1 pound for pound boxer, set up an online vote and even though Khan was the fans favourite, Mayweather eventually chose Argentine Maidana who currently holds the WBA welterweight title, that he claimed after beating Mayweather wannabe Adrien Broner in December.

KHAN (left) or MAIDANA? – MAIDANA IS THE CHOSEN ONE, Mayweather says ‘He is the better man’?

Even though Khan defeated Maidana in 2010 in defence of his WBA World light welterweight title, Mayweather explained that the reason he is fighting Maidana next is because on current form, he is more of a difficult proposition than Khan.

“Maidana came back recently very very impressive, a lot of great wins lately, where as Amir Khan is two and two (2 wins, 2 losses) in his last four fights, so I chose the better man.” said Mayweather.

“This is a very very difficult fight for me, this is a guy who I know I cant over look. Each and every time Marcos Maidana goes out there he gives it his best and I know I’ll have to go out there and give it my best.

“I’ll sit down with my father and go over a brilliant game plan and hopefully this training camp goes well. Maidana is tough, he’s champion just like I’m champion, so when you bring the two together you get nothing but excitement. So this is a guy I know I cant over look. I must push myself to the limit, May 3rd the Money Team will be ready.” added Mayweather.