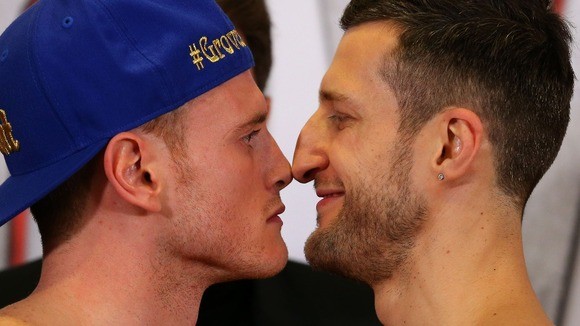 Carl Froch and George Groves will clash at Wembley Stadium in London on May 31, live on Sky Sports Box Office.

The huge Super Middleweight rematch for Froch’s WBA and IBF World titles is set to break British boxing records as they look to settle their bitter rivalry after their epic first encounter at the Phones 4u Arena in Manchester.

Froch stopped Groves in the ninth round of their first meeting in November after the challenger had floored the Nottingham star in the opening round. A seat for the rematch will be the hottest ticket in sport and they go on sale on Monday March 10 when the two fighters come face-to-face for the first time since the fight at a press conference.

“Ever since I walked out at Wembley I knew this was the one,” said promoter Eddie Hearn. “Logistically we had some hurdles to overcome but the support of Wembley, The FA and Sky Sports have helped make history here. This is the first ever fight at the new Wembley Stadium and what better venue to stage the biggest British fight of all time.

“I’m proud to be involved in an event of this magnitude. Internationally the fight will broadcast live to over 100 countries around the world but ultimately this a night that will take British boxing to a new level. The rivalry is fierce; everything is on the line, quite simply: you need to be at Wembley on May 31st.

Barney Francis, managing director of Sky Sports said: “Froch v Groves II at Wembley will be one the biggest fights ever staged on British soil and it’s live only on Sky Sports Box Office. The fight ends an incredible month of sport on Sky and is the perfect bridge to a fantastic Summer of Sport that includes Test cricket, F1 Grand Prix, golf and Super League.”

Melvin Benn, chairman of Wembley Stadium said: “Wembley Stadium has a special affinity with world class boxing having hosted many classics over the years, most notably Henry Cooper’s iconic bout with Muhammad Ali in 1963. We haven’t had a fight here since Frank Bruno vs. Oliver McCall in 1995 so we’re long overdue a duel of this magnitude. This is arguably the biggest fight since the Nigel Benn vs. Chris Eubank rematch of 1993 and there’s no better venue in the UK to host such a bout.”

An announcement on ticket prices and purchasing information will be made later this week.