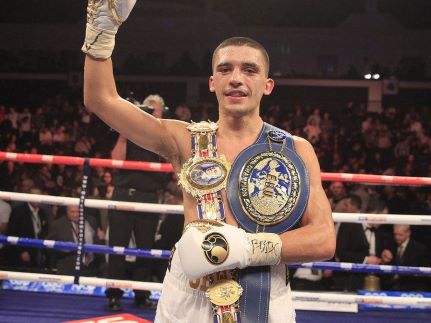 Romulo Koasicha has warned Lee Selby he’ll end his winning streak when the pair meet in a WBC World Featherweight title eliminator at the Motorpoint Arena in Cardiff on Saturday, live on Sky Sports.

Koasicha juggles his studies for a degree in mechanical engineering with his blossoming career in the ring and is aiming to land the vacant WBC International belt and catapult his name into the World title mix in the process.

The Mexican began his professional career in 2008 at the age of 17 after amassing what he describes as “around 100” amateur bouts in his native land.  In 2012 he managed to capture his first title, the WBC’s United States Featherweight belt. After two successful defences he lost on a majority decision but then regained the title in his very next bout after the belt became vacant.

His last fight was as recent as February in a unanimous decision win over countryman Marcos Cardenas. Since then he has been training for his encounter with Lee Selby, and sees a chance to add the vacant WBC International title to his name.

“I’m very happy and motivated as it’s a very important fight,” said Koasicha. “I’m excited to fight in Great Britain and out of Mexico for the first time. We’re going there to win.

“We’ve seen a few videos of Selby. He’s a good boxer with a lot of technique; he knows how to manage distance and punches hard for the Featherweight division. But we have the strategy to fight and win.

“I only had a two week break between my last fight and starting preparation for this one. I have seen in his videos that he lets his guard down and all this forms part of the strategy. If he tries something different then we’ll adapt. Depending on how he fights we’ll adapt but above all we’re going to control the rhythm of the fight.”

Koasicha will not have seen a boxer with the style and awkwardness of Selby. Does he foresee problems adapting, in particular to the Barry man’s ability to throw quick shots from difficult angles?

“I’m a versatile boxer,” said Koasicha. “There are a lot of styles out there, when I fight, I see how my opponent is fighting and I adapt my style to that. If I need to attack then I do that, or if I need to be more technical I can do that.”

The San Luis Potosí native faces a difficult balancing act with his professional sporting career and his studies, nevertheless, despite admitting to the hardship, he is able to manage.

“It’s a very difficult career, but I’m trying my best to succeed in that and boxing. We have to train and plan the classes around it, but I have the support of my family which is very important.”

A university degree is not the only common trait he shares with the aforementioned Cleverly. Like the Welshman, he has been trained by his father, and still is currently. The father-son relationship is sometimes criticised in the sport, there have been plenty of examples when it has yielded success, such as with Erik Morales and Joe Calzaghe.

“It’s something that works,” said Koasicha. “It has its complicated moments but we’re working quite well, in my amateur career as well as now in my professional one. We’re on a good path so there are no plans to change things.

“My dad is my trainer. When we’re in the gym he puts aside the fact that I’m his son and treats me like any other boxer, and likewise I leave aside that he’s my dad and think of him as my trainer.

“My dad got me into the sport, he never had to the chance to compete but he pushed me.”

Koasicha’s clash with Selby is part of a huge night of action in Cardiff as Nathan Cleverly steps up to Cruiserweight for the first time against Guyana’s Shaun Corbin with the WBA Inter-Continental title on the line.