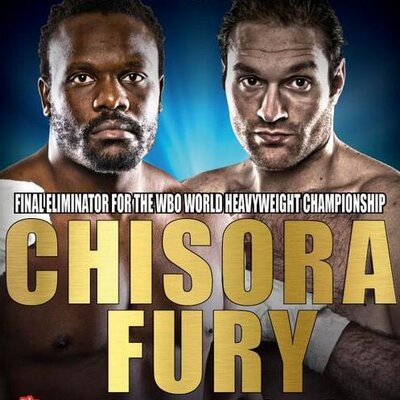 Chisora pulls out of Fury fight

CHISORA OUT OF FURY FIGHT AFTER FRACTURING HAND

– SHOW GOES ON WITH SAUNDERS HEADLINING IN EUROPEAN

– NEW DATE TO BE ANNOUNCED FOR CHISORA V FURY

Dereck Chisora has been forced to withdraw from his showdown against Tyson Fury this Saturday (26th July) at the Phones 4 U Arena in Manchester after suffering a fractured left hand in his last sparring session leading up to the fight.

Chisora’s fight against Fury, which was a European heavyweight title defence with the Vacant British title on the line plus an eliminator for the WBO World title, will now be rescheduled and a new date will be announced shortly.

The title packed show will still go ahead with Billy Joe Saunders now in the main event challenging for the Vacant European Middleweight title against Emanuele Blandamura, plus Liam Smith defending his British Light-Middleweight title against Jason Welborn;Terry Flanagan and Martin Gethin contesting for the Vacant British Lightweight Championship, and Jack Catterall and Nathan Brough fighting it out for the Vacant Central Area Light-Welterweight Championship and a quality packed undercard featuring some of the best domestic talent.

Chisora said, “I can’t tell you how disappointed I am to have to pull out of the fight against Fury, but it is on the advice of my specialist that I have to do this.  I’m sorry for the fans who will get to miss this great fight between me and Tyson this Saturday, but once my hand is healed and I’m given the all-clear to train and punch again, I’ll be working on the new date for the fight.  I was in fantastic shape and had a great training camp, probably the best so far in my career, and was looking forward to getting revenge on Fury, but that will have wait.  I’m sorry to have to pull out on Fury, as I know that he had been training hard and it was going to be a great fight between two top athletes and I hope we can get it on again soon.”

Promoter Frank Warren said, “Everybody involved in the fight worked hard to get it on and for this to happen on the final week is a big disappointment to everyone.  There’s no way that Dereck could fight with his hand fractured and there’s no way I would let him get into the ring and fight with an injury like that.  Obviously you’ve got to feel for Tyson who, through no fault of his own, has been hit hard by this postponement after all the training he has put in.

It’s a big heavyweight fight with a lot at stake for both fighters and we’re working hard to get a new date confirmed.  It’s an old cliche, but the show goes on, and despite Chisora v Fury off the show, a cracking undercard packed with title fights will still go ahead.

Billy Joe Saunders has a fantastic opportunity to step up and claim the European Middleweight title in a tough fight against Blandamura, Liam Smith is set for an explosive British title defence against Jason Welborn, exciting lightweight Terry Flanagan goes for his first title against Martin Gethin with the prized Lonsdale belt on the line, while light-welterweights Jack Catterall and Nathan Brough clash for the Vacant Central Area title, Ronnie Heffron and Liam Williams meet in an Eliminator for the British Light-Middleweight title, plus the undercard features Chris Eubank Jnr, Tom Stalker and many more.”

Once we have had the opportunity to liase with all ticket outlets and agents, further information regarding tickets will be released tomorrow (July 22).