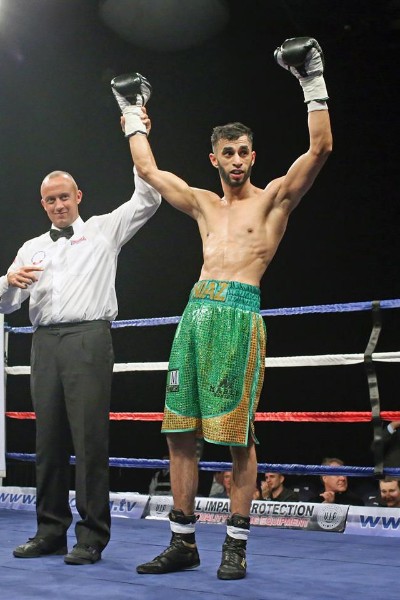 In a sport that sometimes gets a bad press, Qasim Niaz wants to become a role model after turning his life around through boxing.

Just a few years ago the Blackburn youngster, 22, found his liberty curtailed at ‘Her Majesty’s Pleasure’ after a violence conviction.

Since then, the undefeated former England international has dedicated himself to the sport and is a changed man as he heads into his sixth outing at Blackburn’s St George’s Hall on September 6.

“When I was 17 I got in with the wrong crowd and started fighting on the streets, using my boxing skills for the wrong reasons,” explained Niaz. “I got caught up, arrested, and sent down for a bit.

“Since then though I haven’t looked back. My family have helped me, along with my coach, and I’m back on the right track.

“The kids who are out there now, I want them to realise I’ve been there and done it, and made my life better through boxing. And if I can help any of them I will.”

Streamed live/free on VIPBOXING.TV, Accrington’s Luke Blackledge tops the Blackburn show in a WBC title fight clash. While, for Qasim, it’s a first chance to shine in his home town.

With a large following already, the 6ft welterweight hopes to follow in the trail already blazed by heroes Naseem Hamed and Amir Khan, and has dreams of one-day winning a coveted Lonsdale Belt.

“I got into boxing after watching Hamed, who fascinated me. When I was about 14, Amir was going to the Olympics, so he was a real inspiration too. I just wanted to be like him, to be honest.

“I’m very excited about this show, and to have an opportunity like this. My following is growing all the time and fighting in front of my home fans isn’t something that happens all the time, so it’s amazing.

“I wouldn’t be in boxing though if I didn’t think I had the ability to win, at least, the British title. That’s my first ambition, it’s my first dream. The Lonsdale Belt is special, with all the history behind it, and I’d love to challenge for it.”

“We think Qasim has a really bright future in front of him,” detailed promoter Steve Wood. “He’s very skilful and has handled some of the usually tricky journeymen out there with ease so far.

“He’s great to watch and is proving a popular draw already. Hopefully we’ll get a few more fans along to this show and be able to put on more pro boxing in the town in the future.”