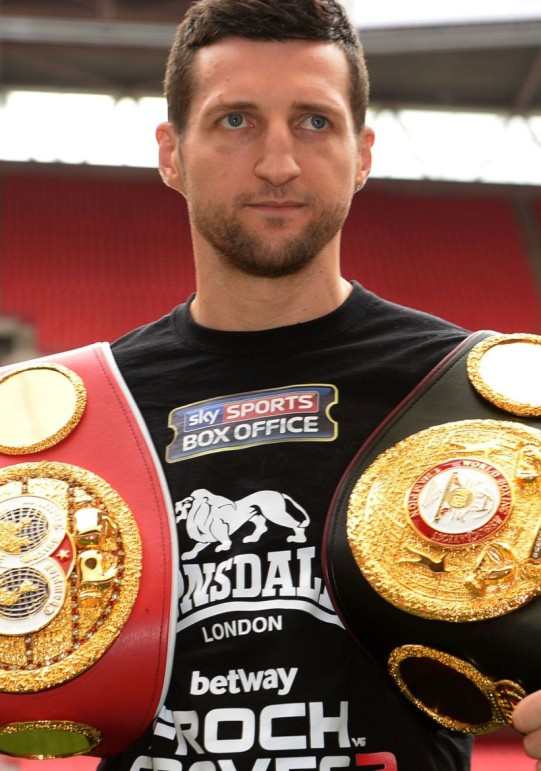 “If that right hand I threw that connected with George Groves’ chin in front of 80,000 people at the national stadium is last punch I throw in my career, I will still be smiling.” – Froch

IBF and WBA world super-middleweight champion Carl Froch has hinted at retiring from boxing if he doesn’t get the dream fight he wants, a showdown with Mexican Julio Cesar Chavez in America.

James DeGale is the mandatory challenger for Froch’s IBF title and is pushing for a fight with the Cobra but Froch, 37, appears to have no interest in taking on his British rival Chunky and wants to ideally finish his successful career with a big fight in Las Vegas.

The Nottingham boxer who was today given the freedom of his City and had a tram named after him told Sky Sports News HQ there is “a strong chance” he’ll retire if he doesn’t get to fight Julio Chavez Junior in Las Vegas.

“That’s where I am on it,” said Froch, I’ve told that to Eddie Hearn.

“He said ‘you can’t do that’ and you know what I can, because if that right hand I threw that connected with George Groves’ chin in front of 80,000 people at the national stadium – if that’s the last punch I throw in my career, I will still be smiling.”

“I don’t need to risk putting my legacy at stake for another British pretender who’s not earned his stripes and without giving James DeGale any stick – he’s an Olympic gold medalist, he’s done well – he’s not quite earned his stripes, but he’s mandatory for the IBF belt.

“Do I fight him? Do I take him seriously? Yes, but if the Chavez fight can happen in Vegas for me, that is the one.

“If the Chavez fight doesn’t happen, there’s a strong chance of me retiring a happy man.”