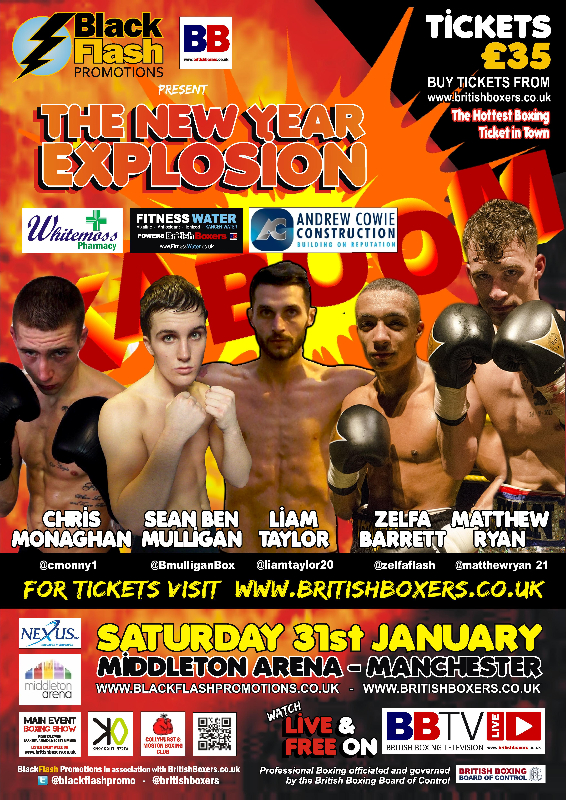 Black Flash Promotions, BritishBoxers.co.uk and BBTV bring you an early 2015 treat, when they stage ‘The New Year Explosion’ on January 31st at the Middleton Arena in Manchester.

The show will feature an exciting line up of fighters from the Collyhurst and Moston Boxing Club and promises to be another fantastic night for the fans in attendance.

The Show will be broadcast LIVE, FREE and Exclusive on BBTV

Featuring on the Manchester card will be local Middleton men Matty Hall, the former Commonwealth light-middleweight champion, also the popular Matthew Ryan will have his 8th contest. While making his professional debut is Rochdale’s former ABA champion Bilal Rehman.

Joining them will be exciting prospect Zelfa ‘Brown Flash’ Barrett and making his professional debut is the highly regarded Collyhurst and Moston prospect Sean Ben Mulligan, who will finally get the chance to showcase his skills on the paid circuit after a good amateur background.

Another interesting addition to the fight running order is the professional debut of former Cameroon Olympian Blaze ‘The Lion’ Mandouo. A former Commonwealth Bronze medalist, Blaze was one of the Cameroon team member’s who absconded from the London 2012 games, due to political reasons. The big hitting Blaze has been living and training in Sunderland with friend Paul Martin and it was Paul who recently introduced him to Pat Barrett. The heavyweight prospect will now train in Manchester with Barrett and appear on the Black Flash Promotion shows as he builds his career.

UPDATE: Matthew Hall will not be fighting on the bill now. There is also a doubt if Blaze Mandouo will get his necessary clearance in-time from the BBBofC to fight, if not he will appear on March 28th on the next show.

ADDED TO BILL: We are delighted to announce that two unbeaten exciting champions are to feature on the show: Liam ‘Dynamo’ Taylor and Jimmy ‘Kilrain’ Kelly both British Masters champions, will have early year four rounders before pushing for title shots in 2015.

The last show was a resounding success, entertaining fights, pre fight entertainment and ringside guests got stuck into the delicious Caribbean food that was available to them.

The event was broadcast Live on and FREE on BBTV and our commentary team of Barkery Jammeh, Jamie Albrecht and former super-middleweight world champion Robin Reid gave expert opinion on proceedings, while boxing brain and respected writer Terry Dooley conducted the post fight interviews. The same team will be in place this time too with some more special guests in attendance to give their backing to the promotion.

We aim for this show to be even bigger, better and more spectacular than the last. BBTV have upped the anti on the broadcast side of things and will introduce more cameras to get the viewer at home and in the arena viewing on the big screen, even closer to the action than they are, with every possible angle covered and plenty of back stage footage and interviews with special guests and fans. We want our events to be an occasion and you part of it.

We will have pre fight shows and ring entertainment and you will be pleased to know the Caribbean food will be in the house for our patrons seated at ringside.

We expect a great night of boxing and hope you can join us. Tickets are priced at £35 – (Tickets have not yet gone on sale, but you can pre-register here. To get the boxing fan in your family the perfect Christmas Present!!)

Ringside tables of 10, are reserved for sponsors or can only be pre-booked privately on a first come first serve basis. (there are only 14 tables available) – please contact us for details or if you would like to reserve or sponsor the event at: info@blackflashpromotions.co.uk

Former British and European champion Pat Barrett formed Black Flash Promotions to give young boxing prospects the platform to showcase their talents. Many boxing promoters only feature boxers who can sell tickets, resulting in many good boxers not getting the opportunities they deserve. Our approach is to take this pressure from the boxers, allowing
them to learn their trade correctly while building up a fan base.

We train, manage, nurture and promote our own stable of quality boxers and help them sell tickets and support them in dealing with media and promoting themselves through various sources to help raise their profile in the sport and to a wider audience. Our boxers are given regular fights and time to learn their trade before moving them on to domestic and world titles.

Our gym has a history of producing champions in this way and Scott Quigg, the current WBA world super-bantamweight world champion is a product of same stable. We are working in conjunction with BritishBoxers.co.uk who give our boxer great exposure through their website and to a boxing audience worldwide online..

Our professional boxing events will showcase the very best boxers coming through and the next generation of stars from our stable at the famous Collyhurst and Moston Boxing Club. We have been established for over 50 years and in that time have produced and worked with champions including Pat Barrett, Thomas McDonagh, Robin Reid, Anthony Farnell, Michael Gomez, Matthew Hall, Michael Jennings, Tyson Fury and Scott Quigg. But many other young people in the area have benefited from using our gym.

By buying tickets and supporting our live events you will be directly supporting the boxers and the Collyhurst and Moston Boxing Club which works directly with young people in the local area. We help to provide them with focus, new skills, education, fitness and a future in the sport if they desire under our guidance.

The people behind the gym and Black Flash Promotions have years of experience in the sport of boxing, PR, and event promotion and have the resources to make all our shows a successful and entertaining experience for everyone involved and all who attends and views our Live online broadcasts on BBTV LIVE.

We are fully officiated and governed by the BBBofC (British Boxing Board of Control) and have plans to have at least four shows per year. With plans in place to expand as we produce future champions, now is the perfect time to join us, support us and get behind us. Be part of our future and help us produce the next champions!

Pat Barrett knows exactly what it is like to be a youngster trying to make it in the world of professional boxing. He is the perfect candidate to not only teach the fighting skills he possesses but can also guide his young boxers to fulfil their potential and develop them as athletes. Once a world class boxer, now a world class trainer, Pat cares about his fighters and their futures.

“When I turned professional I couldn’t sell a ticket and I had to appear as a journeyman to try and get fights, travelling around Europe to take opportunities that were not in the UK.” revealed Barrett.

“Young boxers have to start somewhere and be given the chance to build up their careers, a fan base and the chance to earn a living before going on to bigger and better things.

“Black Flash Promotions is all about looking after our kids and bringing them through the ranks correctly. This is how the past champions from our gym have been successful. It was all started by Brian Hughes MBE over 50 years ago and we are continuing in that philosophy.” continued Barrett.

“These days most promoters will only feature boxers on their shows who can sell loads of tickets, meaning that many other boxers are not getting the opportunity’s they deserve. We aim to change that ethos and give our boxers the stage to shine and make a name for themselves on the high calibre shows we
produce.

“Our aim is to produce the next world champions from Manchester.”