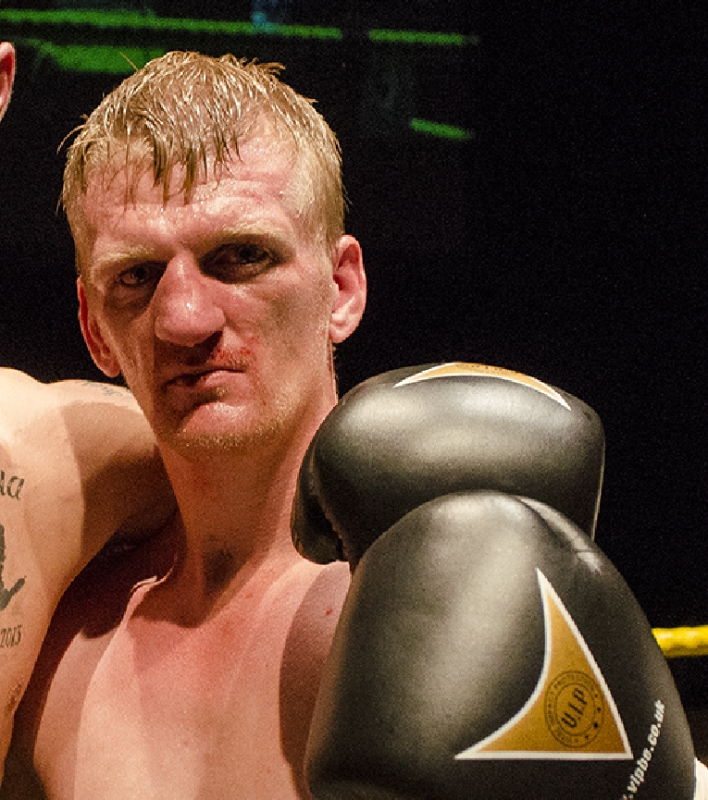 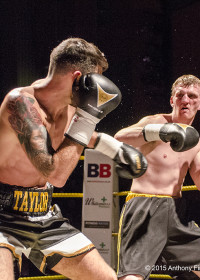 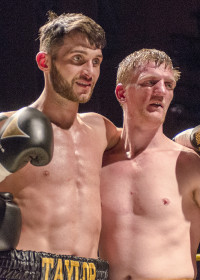 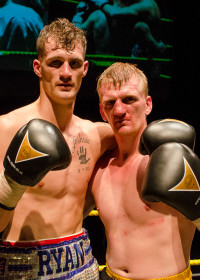 No matter how many fights I watch, there is one particular aspect and quality of a fighter which, to me, stands out above all of the others. That quality is the sheer blood-curdling complete inability to give in or take a step back, no matter what the odds or the situation. I guess for many, the spectacle of a fighter ploughing on into a flurry of head shots and shaking them all off wakens some subconscious memory of all the fights our ancestors won – or none of us would be here, right? I know it does me.

Couple that aggressive ‘Don’t quit! Keep punching!’ voice with a rare talent to entertain a boxing crowd (add in being a nice bloke too) and you have Welterweight Mick Mills from Gillingham. He is one of the most entertaining fighters I’ve seen in twenty years. Yes, twenty years.

I’ve seen Mick fight twice, from ringside, and in those two short bouts the following occurred: Mick sang to the crowd, he chatted up the ring girls between rounds multiple times (prompting the Ref to tell him to go back to his corner stool), he did press ups in his corner, he dealt with hecklers ‘Aw, come on, I’m giving it me best’, he was stopped twice, blood spilled everywhere, he never stepped back, and he fought like a trapped panther from beginning to end.

Both fights I watched were at the Middleton Arena, Manchester, against highly fancied opponents – Matthew Ryan and Liam Taylor – but Mills had large parts of both bouts in his pocket – a testament to his ‘never-say-die’ quality. In the Ryan bout, Mills was trapped in the corner and had just been hammered squarely on the jaw by a great right hook; many fighters would have gone down with no shame, but Mills simply opened his guard and egged on the Manchester prospect. Several hard shots later and Mills had managed to turn Ryan and was thumping back like jackhammer, blood pouring from his nose. For a second, Ryan had a singular crazed look of amazement in his eyes. This man simply would not go away. Journeyman, Mick isn’t.

His record of W1 (KO1), L6 (KO4) doesn’t tell the true picture. He is much, much better than his seven months of stats suggest. He’s genuinely a tough man; the kind of bloke who would survive natural disasters which laid waste to entire civilisations. If doomsday ever comes, all that will be left are rocks, wolverines, and Mick Mills. And the wolverines are in for a shock…

Even miles away from home in Manchester, and always against the home fighter, Mick has garnered a fan base. During his last bout I could hear large sections of the crowd shouting for him against the local lad. There is no greater testament to him than that.