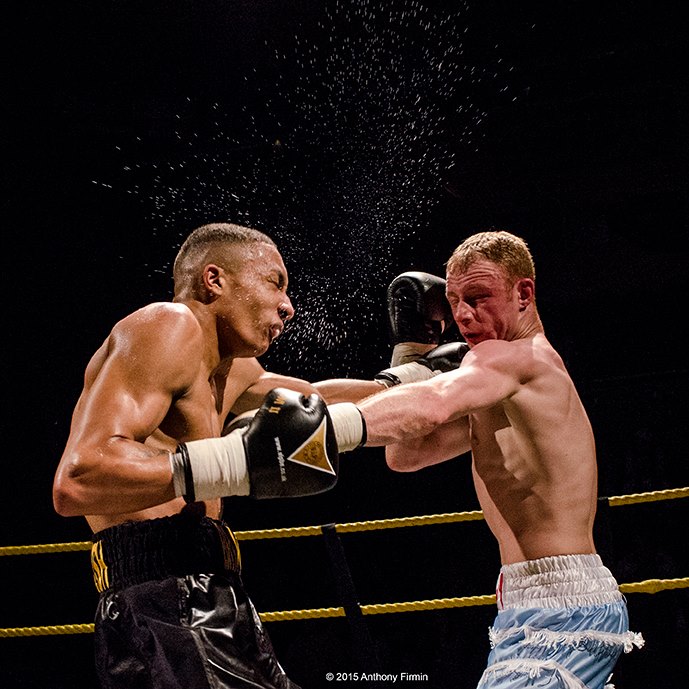 Boxing promotion and the night of the show, doesn’t always if ever go according to plan and this show was no different, but in the end the show went on, the boxers boxed and the crowd went home happy.

In the build up to the show Barrett trained heavyweight debutant in waiting Cameroonian Blaise Mendouo a former Olympian was withdrawn from the bill a month before because of a licensing issues. Then two days before the show Billy ‘The Kid’ Rehman withdrew because of an injured hand in training. The bill then nearly had the popular Zelfa Barrett withdrawn when his opponent failed the pre fight doctors mediacal, when it was discovered he had a cold sore!

The hunt was on for a new opponent for Barrett and matchmaker Steve Furness pulled out all the stops to get in an opponent. Time was running out and with no time left to spare and Barrett already told he wouldn’t be fighting, in stepped Jamie Quinn, the lad Barrett had beaten in his last fight by just a point. Barrett was back on the bill after Quinn finished spaghetti bolognese tea while waiting to watch the Kell Brook fight on TV. But Quinn who deserves massive credit jumped in the car and was at the arena in half hour from his home in Stockport, fight back on! And Quinn had revenge on his mind after pushing Barrett close in January.

Barrett though this time made easier work than the last time, keeping Quinn on the end of his fast accurate jab and boxed well to control proceeding, but he could never take a breather in an entertaining four rounder as ‘Quinny kept coming. Barrett landed a thudding left hook in the third that shook Quinn, who did well to shake off the effects and keep coming. Barrett took the verdict, 40-37 points on the referees card.

Matthew Ryan from Middleton put on another non stop action display for his loud supportive fans, who always get behind him. Ryan was taking on the tough Latvian Victor Drizlionoks and had to be switched on and always aware of his opponents bombs, but the local man boxed well and dictated the action. He had his opponent reeling in the third from a succession of hurtful body shots but couldn’t put his man away, Ryan finished the fight strong taking a 40-37 verdict on the scores. Ryan keeps on track for a title shot in the near future.

Lightweight Sean Ben Mulligan was having his second pro outing after debuting in January. He was up against Hull’s Paul O’Brien and was made to work for his win by the visitor who was willing to trade with the Manchester man and stand his ground. Mulligan looked at times like he was forcing his work and neglected his fine jab and sharp head movement that we saw in his debut, sometimes looking content to walk O’Brien down and have a fight with him. When Mulligan got a rollicking off coach Pat Barrett at the end of the 3rd, he came out in the final round behind the jab, hands up and finished the fight sharp to take a close 39-38 referees nod.

They call him fat boy, after Salford’s Chris Monaghan lost 7 stone to fight professional, after being a heavy drinking eating machine in his teenage years. Looking at his ripped torso and tight muscle structure, it is hard to believe he is the same human being at all. Fighting at light-middleweight, this former heavyweight was making his pro debut and didn’t disappoint with a controlled display of boxing from behind a nice range finding jab. Robinson, from Lincoln and trained by former champion Esham Pickering was content to box on the back foot, hands high he was looking to catch ‘Fat Boy’ coming in with the counters but the home fighter didn’t fall into Robinson’s trap and after an entertaining opening fight that had the crowd in high voice, Monaghan took the win on points, 39-38.