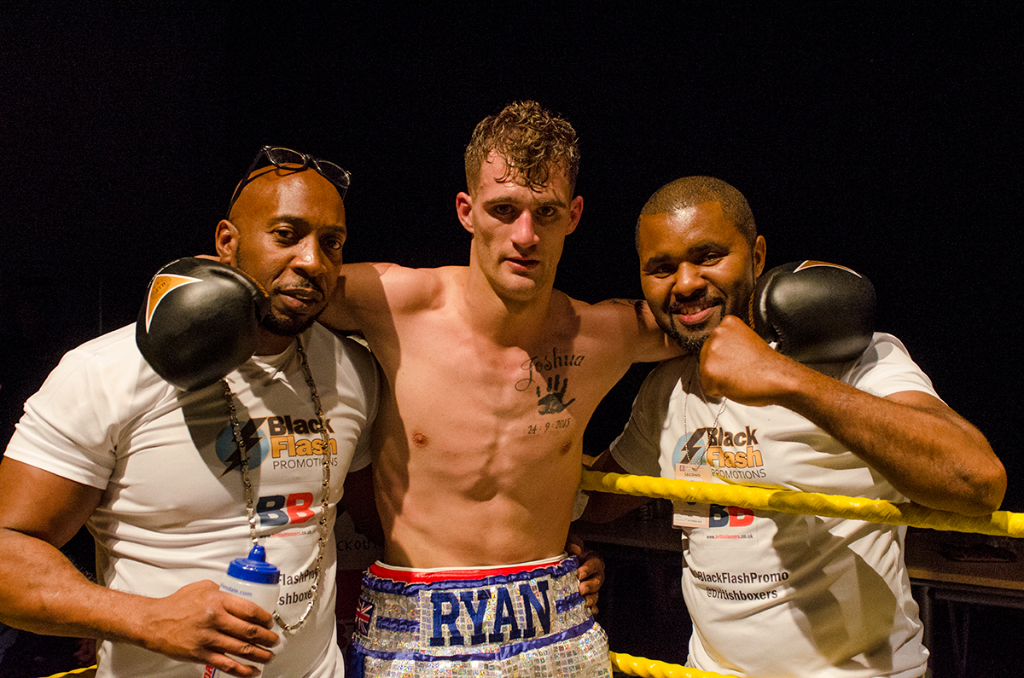 On the bill was Middleton light-middleweight Matthew Ryan who stopped Gillingham’s Mick Mills. There was a professional debut for Pat’s nephew Zelfa Barrett who impressed in outpointing Kristian Laight and not having a glove laid on him in the process, a real chip off the old block who has inherited the boxing Barrett gene alright! – Home fighter Curtis Gargano lost over four rounds to Angelo Crowe. The Leeds Lads, Justin Newell, Reece Cartwright and Zahid Hussain also picked up wins and performed well. Full show report here.

So how does promoting shape up to being a fighter and a trainer and how did Barrett set about promoting a show that has received rave reviews for the quality of boxing and the production value on what in effect was just a small hall show?

“I am not a promoter, I am a boxing trainer.” said Pat Barrett. “I am part of a team of boxing people all working for a common goal, to produce prospects and get them regular fights on our own shows, build my fighters up the right way, the traditional way, like Brian Hughes did with me and the same way we did it with Scott Quigg and the other champions from the Collyhurst and Moston. (The famous Manchester gym, established by Brian Hughes MBE and now run by Barrett and Thomas McDonagh)

“Learning your trade the correct way, enjoying it, feeling special, giving them something to focus on and to justify the pre fight work they do in the gym and the mental torture they face putting themselves through it day in day out, there has to be an end product and Black Flash Promotions are all about creating that product bringing competitive fights and entertaining shows that everyone enjoys in the arena and on the TV.

“We have backing from strong areas, people who want to see their local area doing well, where we are all from, we want to bring boxing back to the real boxing fans, Manchester has always been a boxing city and we produce and we will continue to do so and follow in the legacy.” continued the passionate Barrett.

Related Article Exclusive Pat Barrett Interview: ‘Boxing is Being Starved of Oxygen and will Die’ – July 18, 2013

“None of us are here forever and nobody owns boxing, we are all just products of it and of the people who went before us. Everybody in boxing has a duty to boxing, that during our time we leave the game in a better state than when we found it.

“We must all remember why we do it, why we sacrifice and bring back the love to our sport.” Barrett added.

The Middleton show was hit by big withdrawals in the run up to the night, former Commonwealth champion Matty Hall was set to top the bill in his home town but was withdrawn by Barrett after taking ill with a virus. Then the popular Ben Mulligan, also trained by Barrett, pulled out after perforating his ear drum while sparring. Then just two weeks before the show heavyweight Young ‘King’ Fury withdrew after his uncle passed away. Rumours circled that the show would be put back to accommodate the absences but Barrett never got that memo.

“I don’t know who said that but that’s laughable, let me tell you, that show was always going to go ahead regardless of any hiccups in the build up.” Barrett explained.

“There was no way I was ever going to let my lads train, pain and sacrifice their lives to pull the show. Even if there was to be two fights on the bill, Matty and Zelfa, and we had only sold one ticket, that show was going ahead. This isn’t about the money for us, it isn’t an issue, it is about building up my fighters and looking after them as people. These are grown men with family’s to feed and these are the things we take into account, we won’t let down the lads who have grafted, jeopardise their future and demoralise them because someone else as pulled off the show! No we deal with it and move on to what we have focused all our efforts into completing, we cannot fail we must succeed.”

Zelfa Barrett, Pat’s nephew made his professional debut on the show against 200 + fight veteran Kristian Laight

Barrett went on to explain how the show evolved into a joint Manchester-Leeds collaboration after boxing figure Rick Manners, advisor to a stable of boxers from Yorkshire got in contact with Barrett just as he was working through a short list of possible replacements.

“Luckily a stroke of fortune occurred when my old mate Ricky Manners from Leeds gave me a call and asked; if I could initially put one his lads on the bill as he had heard we have had lads come off the bill. We spoke and eventually agreed a deal to put three of his Leeds boxers on the bill and we changed the plans immediately, re-written the show and delivered it from another angle, you have to be prepared for things like that in boxing, I have been in it long enough to be know. So it was good business for both parties really and we will work with Rick on future shows I hope he and his lads enjoyed and experienced a good night and they felt looked after while under our watch.

“We were happy to do this with Rick because he has the same problems like us, getting regular fights for his boxers, so in the end it worked out great for all parties involved and because of that there will always be a place for Rick and his lads on our promotions and it is an interesting option to unite Manchester and Leeds and take our lads over there and vice versa in the future.” Barrett added.

So after the promotion has Pat had time to reflect on how it went and what the plans are for the future? “I have watched the show back and I was very happy with the boxers performances on the night and the production that our team put together, everybody involved did a fantastic job. This was a trial run for us really, regards putting on a show at the level we did and they will only get better, the right people are in place and we have plans for many more shows in 2015, the hard work begins now!”

A Report from the night

“I spent Saturday night at Middleton Arena witnessing Black Flash Promotions’ first foray into the world of boxing promotion. Concerned with the amount of action the fighters from his Collyhurst and Moston Lads Club were seeing former British and European light welterweight champion, Pat Barrett, took it upon himself to give them the platform.

Barrett and Chris Maylett from www.britishboxers.co.uk had distinct ideas about the way things should be done and I would struggle to imagine the amount of work which must have gone into preparing the event which was streamed live. Excellent – and under used – Manchester boxing voice Barkery Jammeh and former world champion Robin Reid provided the online commentary and Boxingscene’s boxing sage, Terry Dooley, carried out the post fight interviews. A big screen showed the in-ring action live in the amphitheatre style venue and rather than relying on one fixed view camera, a director flicked between various cameras, giving the viewers in the arena a unique view of the action. The excellent Caribbean food and entertaining ring girls [who promise to return on the next show with spins, flicks and forward rolls] were added bonuses.

Of course, once the glossy wrapping paper is torn off, you are left with the product itself and Black Flash Promotions have a couple of useful fighters to build their success on. Zelfa Barrett (nephew of Pat) outpointed good old Kristian Laight on his professional debut and the lightweight showed enough skill and know how to point to a promising future. Matty Ryan got rid of Mick Mills in five one sided rounds and showed the kind of hard hitting aggression that should ensure another good turn out when Black Flash return to the arena [tentatively scheduled for February].

North Manchester has been starved of action recently and with local lad and former Commonwealth light middleweight champion Matty Hall and Young King Fury linked to Black Flash, the future could be bright.”

You can read the official fight night report with pics and watch the full show video here.