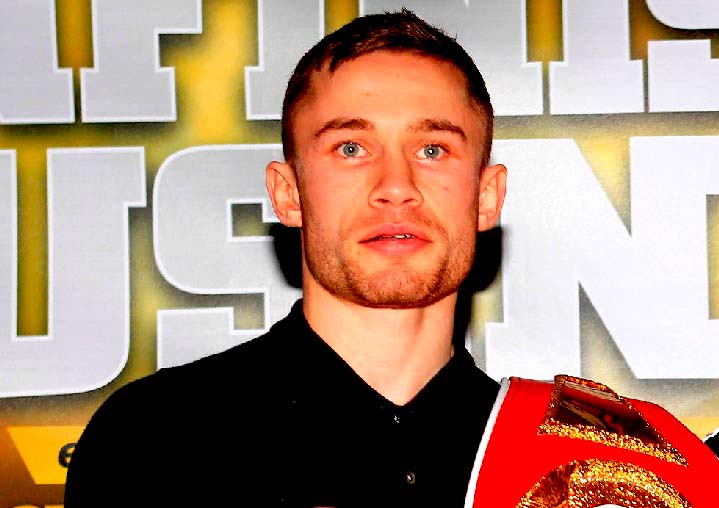 Last Saturday night presented a dramatic, adrenaline fuelled display of fistic entertainment, with a variance of styles to suit many a boxing fan’s taste, as well as a rousing rendition of a Cher classic to cap off a busy Saturday fight night.

Frampton bossed proceedings from the second round. After a cagey opener, “The Jackal” highlighted his wicked intent by taking advantage of a lapse in concentration from Avalos, who turned his back complaining of an injury to the right shoulder.

From this point, Frampton bossed the encounter, landing solid, hurtful blows and displaying an aptitude for controlled, aggressive pressure as he overwhelmed his previously cocky challenger. A cocktail of head and body shots convinced the referee to stop the contest in the 5th round.
Frampton voiced his eagerness for a summer showdown with domestic rival Scott Quigg after the fight, and will certainly be confident of victory after his latest convincing triumph.

Ancoats’ Denton Vassell will be assessing his remaining career options following a loss to unfavoured Viktor Plotnykov on the Frampton undercard in Belfast. The chiselled Vassell lacked a sharpness seen in previous contests, as he failed to utilise his normally reliable head movement to avoid a number of hooks that appeared to make his knees tremble and his confidence evaporate.

Elsewhere, in the English Capital, Tyson Fury did as expected, stopping the one dimensional Christian Hammer in eight painfully one sided stanzas. Fury displayed mobility and a comfort with either stance that we are becoming very used to.

The Jab was once again ever present to set up clubbing hooks and uppercuts. Fury switched through the gears with ease and affirmed his right to face Heavyweight Kingpin Wladimir Klitschko in his next outing with a comedic take on the classic power ballad “Walking in Memphis”, which must be seen to be appreciated.

Last but definitely not least, “next gen” Chris Eubank Jr secured his first championship belt with a display of speed and power punching against outgunned WBA interim Middleweight champion Dmitry Chudinov. This version of Eubank Jr looked far removed from the one who hesitantly waltzed through the early rounds with European Middleweight champion Billy-Joe Saunders last November, only upping his output and quality late on – tactics which cost him the win.

Eubank seemed to relish being on the back foot early on, choosing to use the loose ropes to lean back, forcing Chudinov onto a stiff jab that allowed him to fire off heavy hooks whenever he pleased. The limited but teak-tough Chudinov plodded forward with a grim desire, to no avail, as Eubank’s eye catching heavy artillery proved too much for the Russian, who finally wilted in the 12th and final round.

The win gives Eubank Jr a somewhat questionable world title belt as well as the more valuable source of providing bargaining power for a return with Billy Joe Saunders. This re-match looks to be an exciting prospect. Eubank Jr will have grown as a fighter in his display of bombardment and may be able to translate this newly found experience into a victory the second time round