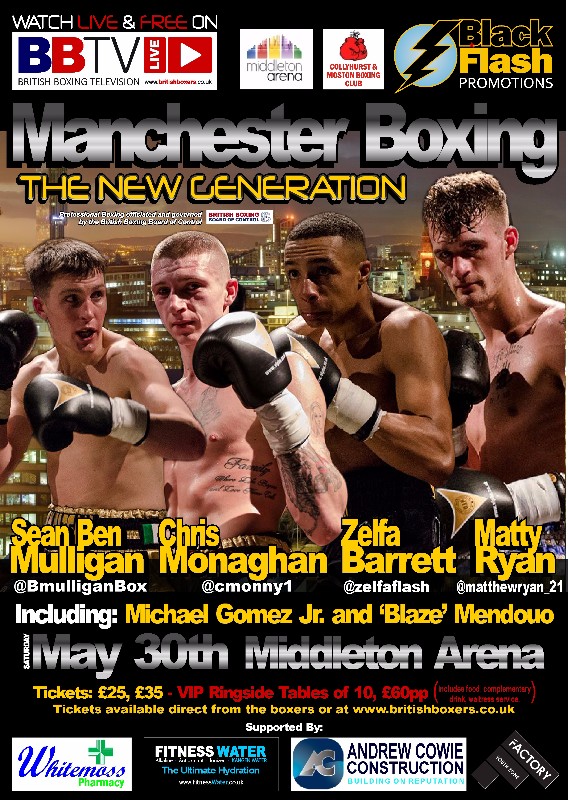 On May 30th Black Flash Promotions will host their 4th boxing event when they present a card of up and coming professional boxers from the Collyhurst and Moston Boxing Club in Manchester.

The show will be held at the Middleton Arena in the city and Tickets are priced at £25, £35 and for VIP Ringside table seats at £60, which includes food, complementary drinks and waitress services.

For anyone who cannot make it, The full show will be streamed LIVE and FREE on BBTV at www.britishboxers.co.uk from 7pm. Here

Starring on the bill, named ‘Manchester Boxing – The New Generation’ will be a host of highly rated prospects who are on course to follow in the great traditions of their gym and heritage that Mancunian boxing holds. local Middleton favourite, light-middleweight Matthew Ryan will be looking to put on another solid performance in front of his hometown faithful, as he looks to secure a title shot in the next 12-months.

Super-featherweight Zelfa Barrett will be having his 5th fight since making his debut in October, as he continues to learn his trade. Barrett has been impressive so far in his short career. He is starting to turn heads and boxing fans are taking note of this young man’s potential.

Exciting all action Welterweight Sean Ben Mulligan will be having his 3rd pro outing on the card and already he is courting rave reviews, even drawing comparisons to Mancunian fight legend Ricky Hatton, such is his come forward style and tendency to cut his opponents in two with viscous hooks to the body. Mulligan is also getting the reputation as a fans favourite like his hero and his fight nights are becoming quite an occasion for his small army of followers, who make their way on pre arranged coaches from his local, The White Room, in Whitefield. (VIP Ringside guests are invited to the after party at the White Rooms after the show)

Also on the bill will be Chris Monaghan aka ‘FatBoy’ who has his 2nd pro fight, after making a winning debut in March. Monaghan came to fans attention when he revealed his remarkable story before his last fight. The light-middleweight stylist remarkably weighed in at 17.5 stone prior to taking up boxing. He cut out the fast food and alcohol to get to today’s fighting weight of 11 stone, losing over 6 stone in weight. He credits boxing for saving his life, after being diagnosed as obese at his heaviest. His story is one of inspiration for anyone, but the story has just begun and there are big things ahead in boxing for this ultra dedicated boxer, with ambition to make it to the very top.

Another treat on the card will be the appearance of Michael Gomez Jnr, son of former Popular Manchester fighter Michael Gomez. Junior who is now trained by former British and European champion Pat Barrett, who also promotes the shows, is highly touted and tipped to follow in his fathers ring exploits by winning titles. He has certainly inherited his dad’s genes and will be a welcome addition to this show.

Making his professional debut will be former heavyweight Olympian and former Commonwealth games champion ‘Blaze’ Mendouo. Originally from Cameroon he is now living and training in Manchester with Pat Barrett and will be an interesting acquisition to the pro ranks and this promotion.

“I am delighted to be able to announce our next show for May 30th, in fact these shows cannot come around quick enough for the lads and the more people who are showing interest in them.” Said Show promoter and trainer Pat Barrett.

“All our boxers were straight back in the gym after the last show in March and ready to get back in there again. Plus we have added my friends son Michael Gomez Jnr to the bill, I’m now training the lad and I have been very impressed with him in the gym, but I can add plenty more to his skills, power and his mental edge the longer he is with me, the signs are good and I will look after him for Mike, (Gomez).

“It is important to keep young boxers active and putting them in regular fights like this early in their careers will stand them in good stead and keep them focused, gym disciplined and always ready to compete.

“I would like to thank the boxers for the dedication and commitment they have shown me and it hasn’t always been easy and it will get worse before it gets better! I don’t make it easy for them, I push them and hurt them mentally and physically, not many have managed to take it over the years, but I tell you, these lads take it and come back for more and that can tell me a whole lot about a man.

“This sport is hard, I am a serious person when it comes to boxing, I know from experience and if you want to get to the top you have to be prepared properly, but If they can take what I give them in that gym and survive it day in and day out, they will be prepared to break down and go through stone walls come fight night.” Added Barrett.

“I’d also like to thank my team, the coaches, and our sponsors, Whitemoss Pharacy, Andrew Cowie Construction and Fitness Water, all who’s commitment to us, and their support for our boxers has been amazing.”