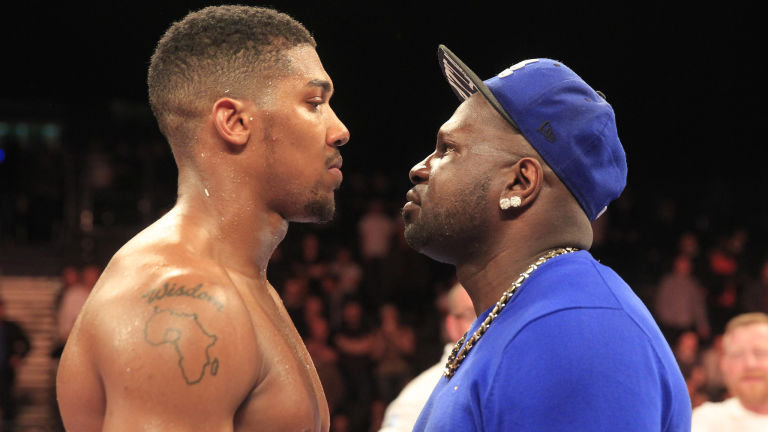 Anthony Joshua prepares for the toughest test of his pro career

Kevin Johnson has promised Anthony Joshua MBE the toughest night of his pro career when they clash at The O2 in London on May 30, live on Sky Sports Box Office.

The experienced American will present Joshua with his toughest test to date in his pro career, with the Olympic gold medallist boasting a perfect KO record from 12 fights, blasting away all his opponents inside three rounds.

Johnson has been quoted as saying “I’ve trained for so long for this fight and I have got the hunger back,  “Anthony is so big that the KO is going to look so good.”

“He is very confident with the start he has made, but I am confident I will knock him out. He still has something missing and I hope that no-one fixes it before May 30 because that’s why I am going to knock him out. When I was 3-0 I boxed another Olympian and really beat him, because all these Olympians that turn over have one thing missing – I saw it with him and I see it with Joshua.”

Anthony Joshua has stressed the importance of being ‘professional’ as he prepares for the biggest heavyweight bout of his career, Joshua has been quoted as saying “I’ve got to approach Kevin Johnson just like any other fight,”

“I’ve got to be professional and I’ve got to have the same attitude I’ve had with all my other opponents because that helped me get some good wins over them and that’s what I plan to do against Johnson.

“Preparations are going well. I had a great warm-up fight on May 9 in Birmingham and delivered a great knockout so I’m full of confidence and in good spirits ahead of my fight with Johnson on May 30.

“Johnson is very experienced so he will be playing mind games and will be talking to me while I’m in the ring. He’s hard to hit so I’ve just got to go in there with the attitude of taking each round step-by-step and break him down like a tree. I’m going to keep chopping him down till he falls.”

Last time out the heavyweight prospect improved his career record to 12-0 after thrilling the Birmingham crowd with a trademark finish in the second round before coming face-to-face with upcoming foe Kevin Johnson.

Joshua was fully in control of the bout but ended it with frightening ferocity – a right hand flew past Love’s guard and bludgeoned him. The Brazilian visitor was left floundering on the floor with no possibility of returning to his feet.

His American counterpart, to a chorus of boos, said: “I’ve got the antidote for this guy. I know what I’ve got to do to stop this guy. This will be the meanest fight anyone has seen.”

However, Joshua was given the final word when asked what would happen when the pair meet later this month.

“May the best man win, but I’m sure everyone in here knows who the best man is out of me and him – it’s easy work for me.”

The American comes into the fight off the back of three straight losses but Joshua insists the American will have a point to prove in their heavyweight clash at London’s 02 this weekend.

‘Kingpin’ Johnson has been the distance with Vitali Klitschko, Tyson Fury and Dereck Chisora and Joshua is refusing to underestimate the wily 35-year-old from Atlanta, Georgia.

Johnson’s clash with Joshua is part of a massive night of action in London topped by three huge World title bouts.