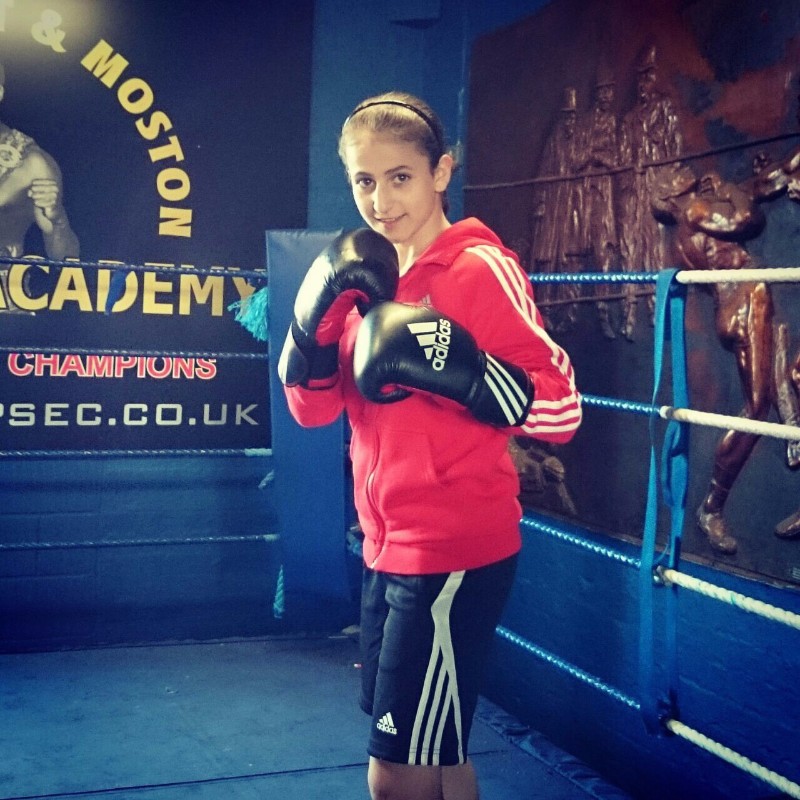 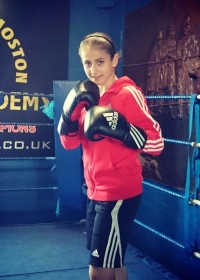 Maria Edwards in the Boxing Gym 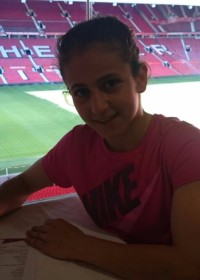 Maria Edwards is not your average 12 year old girl, not only is she a talented football player, so much so that she has recently been signed up by local team Manchester United, she is also a boxing champion, recently winning the National championships and she is tipped to go to the very top in what ever sport she chooses, she chooses both!

Maria, a former two season leading goalscorer and multi title winning youth player for Manchester City, was recently signed up by their rivals Manchester United, on a years contract. United were obviously impressed with her tally of goals from last season, 70 goals in 24 games!

In boxing, she won the national title last month after stopping Newcastle’s Bobbi Bowman in the 2nd round of the the semi finals in Birmingham. In the final Maria couldn’t get an opponent to face her and subsequently received a straight bye and declared champion, to wrap up another great season for her and her gym.

In her last five bouts, she has won four of them by stoppage, with one of the stoppages in a Northwest vs Southern area competition, where she halted Paige Lyons in the opening round to really get the heads turning, such was her uncompromising attack and skills beyond her years. Maria is coached by former fighter Thomas McDonagh and his team at the famous Collyhurst and Moston boxing club in Manchester and they think very highly of her skills and believe she can achieve what she wants to do in boxing.

This Mancunian wonder girl only turned 12 recently and started high school and has been boxing since she was aged 8, and in all that time her coach McDonagh a former top class professional says she has never missed a training session and is just as fit as some of the senior members and she is an absolute pleasure to work with.

“She is always fit and ready to box any time and will travel anywhere to box, she is such a special individual and she’s a credit to her family and our gym.” said McDonagh.

“Maria is always at the gym first in last out and is getting better and better all the time, the other young boxers coming through are motivated by what Maria has achieved, how hard she works and she has won everyone’s respect with her attitude and the hard work she puts in training and in her fights, which rubs off on everyone else.”

“We are all proud of her, what she is achieving with us boxing and at Manchester United and before that at City is amazing, she is a role model for kids her age and teenagers, she is proof that if you want something enough, no matter how difficult you may think it maybe to achieve, nothing is impossible, that is Maria’s attitude.” added McDonagh.

Q&A – Who is Maria Edwards?

We spoke to Maria recently and asked her why she boxes and what she loves about the sport? “I box because I am a very determined girl who loves sport. said Maria. “I love sparring in the gym and training hard and getting myself prepared for the fights coming up. To make sure I win, I obviously train really hard before each fight, I am always ready to fight and I’m confident I will win when I get in the ring on fight night because I know I couldn’t have trained harder.

Did anyone in your family box, is it in the genes? Nobody in my family have ever done boxing as far as I’m aware? At the age of 8 I decided to join a competitive sport and when I tried boxing I took to it quickly and my coach told me of my talent and I have continued to go to the gym ever since.

What Boxers do you admire in the sport? My favourite boxer as a female is Olympic gold medalist Nicola Adams and male boxer would be Manny Pacquiao, I’m told my style is like his, haha!

Tell us about your boxing club? It is a great club in Manchester where I train at, it is the Collyhurst and Moston Club. I have very good coaches and they make me train hard but I love it and I am always there to make sure I am learning all the time. We have very good boxers in the gym amateurs and up coming professional prospects. Our head coaches are Thomas McDonagh and Pat Barrett, both of them were champion boxers and we are taught by the best. I’m really pleased to represent the famous Collyhurst club and to follow in the footsteps of all the famous boxers who have trained there.

How do you mix your boxing training with playing football for the biggest club in the world? Mixing boxing and football gives a lot of benefit to myself. Football helps boxing with my fitness and speed and boxing helps my football to give me more strength, aggressiveness and passion to play.

If you had to pick between one sport or the other what would you choose, boxing? Or football? Haha, I’ve been asked this question lots of times over the past 3-years. I can’t pick one over the other at the moment, I couldnt do it and hope I dont have to make that choice in the future. I hope I can continue to do both and it should be ok, because in my boxing, I’ve won all my fights and same in the football my team and I have won everything so far. If the time comes when I to decide between the two, which ever one it is I will always do my best.

What do your Manchester United Coaches think of you being a boxer too? Manchester United don’t really know a lot about myself boxing much yet, I’ve not really mentioned it, just been busy training really. Some of my team mates at City, when I played there, knew I boxed and a few actually come down and watch my fights, but no one at United know I box.

Which training is harder, Boxing or Football? Both are hard really, I can’t say one is harder than the other because I always give my 100% effort in both and make it as difficult as possible for myself.

What are your dreams as a Boxer and a Footballer? I want to win the football World Cup and in boxing the Olympic Gold Medal and then a World championship boxing title, they are my dreams to win in both sports if it is possible to do that in the professionals, I hope so because I want to do that and be a success.

What does the future hold for you in your mind? Obviously, it is a very good feeling to sign for Manchester United and I am proud of all the hard work I’ve made in football and I can’t wait for next season and I feel I can progress and continue to improve as I get older and then I will be ready to be a professional. To win my first ever national championship in boxing, It just felt great and hopefully this can continue every year to come. The way I always think after my fights or games and after winning the championships, my My thoughts were, I know Ive won but Ive got to train harder as my fights will get harder as I progress. My future? I would like to retire with a successful career in boxing and football and have a famous name, become somebody special.

The Collyhurst and Moston Boxing Club have a professional boxing show coming up on Friday 31st July – Details here.