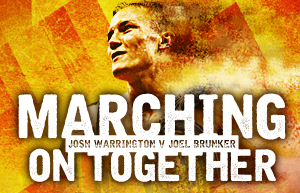 Josh Warrington: “I just keep getting in there and doing my best.”

WARRINGTON OUT FOR LEEDS HAT-TRICK

Josh Warrington says he’ll add a win against Joel Brunker to wins for the Leeds Rhinos and Leeds United at the First Direct Arena on Saturday night, live on Sky Sports.

Warrington defends his WBC International and Commonwealth Featherweight titles against the Australian – but with Brunker last in the UK against Lee Selby, this fight is seen as a yardstick for Warrington’s preparedness for the World scene.

The Rhinos thumped Hull KR 50-0 in the Rugby League Challenge Cup final at Wembley on Saturday while United claimed their first win in the Championship this season by beating Derby County 2-1, and Warrington believes those successes will galvanise his already fanatical support to create a feverish atmosphere on Saturday.

“The city is on a high right now and I want to capitalise on that on Saturday,” said Warrington. “It’s a special feeling standing on that ramp getting ready to walk to the ring. Even in the weeks beforehand there’s a massive buzz around the city with everyone getting excited about the fight and getting ready for the atmosphere – that’s got its own reputation now with people coming from all over to sample it, and it’s just getting bigger and bigger now.

“With that type of support behind me I can go on and win a World title, I know that. I want to deliver for them.

“I’ve had a busy year already and I think the rest has done me the world of good. I wanted to return with a big test and that’s what I have got. I got some stick for not getting Dennis Tubieron out of there but i was in a catch-22 situation. If I had blasted him away people would have said that I was just fighting a Bantamweight or Flyweight or whatever people would’ve said I was facing. That’s just the way it is now, I’m rising up the rankings and people are going to try to shoot you down. I just keep getting in there and doing my best.”

Warrington’s clash with Brunker is part of a huge night of action in Yorkshire as Martin Murray faces Jose Miguel Torres for the WBA Inter Continental Super Middleweight title.

Tickets for September 5 are also available from http://www.stubhub.co.uk/matchroom-boxing-tickets/ – StubHub is the official ticket partner and marketplace of Matchroom Boxing.