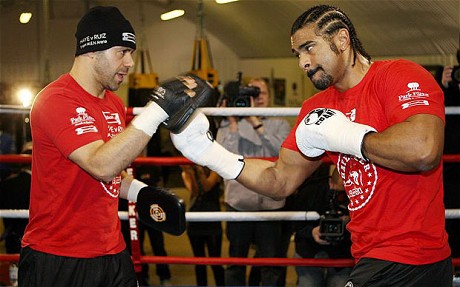 Former trainer of David Haye, Adam Booth has backed his old charge on his proposed return to the ring and welcomes the “Hayemaker” back to the sport.

Former world champion Haye who boasts a record of (26-2-KO24) has recently paired up with Shane McGuigan’s and now is sparring at his gym with speculation of David set to make a return to the fight game.

Haye would be fighting for the first time since a fifth-round stoppage victory over domestic rival Dereck Chisora and has been inactive since July 2012.

Booth, who trained the South Londoner and followed David on his path to world honours with stand out victory’s over the likes of the giant Nikolai Valuev in 2009, has recently been quoted as saying : “I don’t think it’s a surprise.

“He has been talking about it for quite a while and at some point, he has obviously spoken about it enough. David is a very smart, shrewd fellow and knows the decision he makes. He has decided that now is the time to take the step.

“He and I have a complete understanding of the fact that our working relationship ended a little while ago. I have too much on my plate now with the fighters I’ve got. I’m loving every day in the gym.

“I wish David all the best. People criticise him all the time but people will watch him because he’s entertaining, value for money, exciting and very talented. Whether I’m in the corner or watching it, I’ll be equally excited.