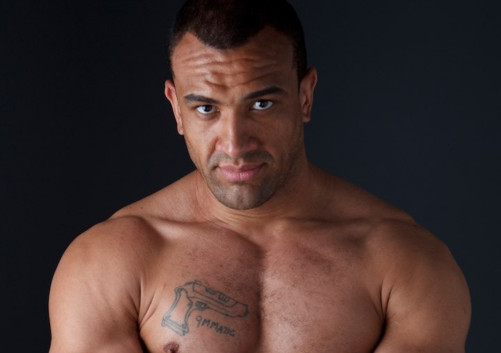 Sheffield’s Richard Towers has been working with world heavyweight champion Wladimir Kilitschko as a sparring partner helping him prepare to defend his his WBA Super, WBO and IBF world heavyweight titles against his fellow British heavyweight Tyson Fury this weekend (Saturday 28th Nov) at the Dusseldorf’s Esprit Arena before a sell out crowd of 55,000.

Towers, 36, a former European champion with a respectable 15-1, 12KO record, has been brought in with many others, as a sparring partner for Klitschko because of his height – At 6’8″ he is of similar stature to Fury who stand 6’9″.

The Yorkshire man has sparred with Klitschko before prior to this camp, going back three years ago the first time he shared a ring with the Ukranian. He has a unique view of the champion in camp and revealed how hard it is to be on the receiving end of his punches. Towers says he is earning good money to take Klitschko’s blows in sparring, but had a warning for his fellow countryman.

“I have huge regard for Fury, having sparred with him as well, Tyson is one of the best fighters I’ve shared a ring with,” Towers said.

“He will be coming to fight and he’s very game. I wish him all the best, but there’s a huge difference in level. Wladimir is the complete professional and a very consistent performer.” He predicted: “Tyson will either be knocked out or beaten over 12 rounds.”

Towers went on to discus his experiences sparring Klitschko. “I came here three years ago and he dropped me. I felt like I had never been in a ring before. Now I’m better but I have to be very careful.

“When he throws a punch, nine out of 10 times it lands, and he’s always in position to throw shots. He may be 39 now, but there’s no deterioration at all, believe me.”

“We earn seriously good money, but we earn it. Wladimir likes to land shots and he takes no prisoners.” added Towers

On hearing Towers’ verdict, Fury hit back and accused Towers and his trainer Adam Booth of helping Klitschko as a ‘typical trick! – Towers was also a sparring partner for David Haye when he was preparing to face Fury, in the fight that never happened!

The unbeaten Mancunian took to Twitter to respond: “Richard Towers helping Wladimir Klitschko. Typical Adam Booth trick, that. Shame I could flatten all three in the same night!”

Fury is super confident and determined he will beat Klitschko and bring a new era to the heavyweight division and boxing, one not seen since ‘The Greatest!  “The world will have the most colourful, charismatic heavyweight since Muhammad Ali.” said Fury.

“I’m the one the world’s been waiting for.” I’m the man to fill Ali’s boots. The world needs me to change the landscape of the division away from these robots. We’re heading for a new year, a new era and a new heavyweight champion.”

WHO WINS? – PREDICT THE OUTCOME HERE