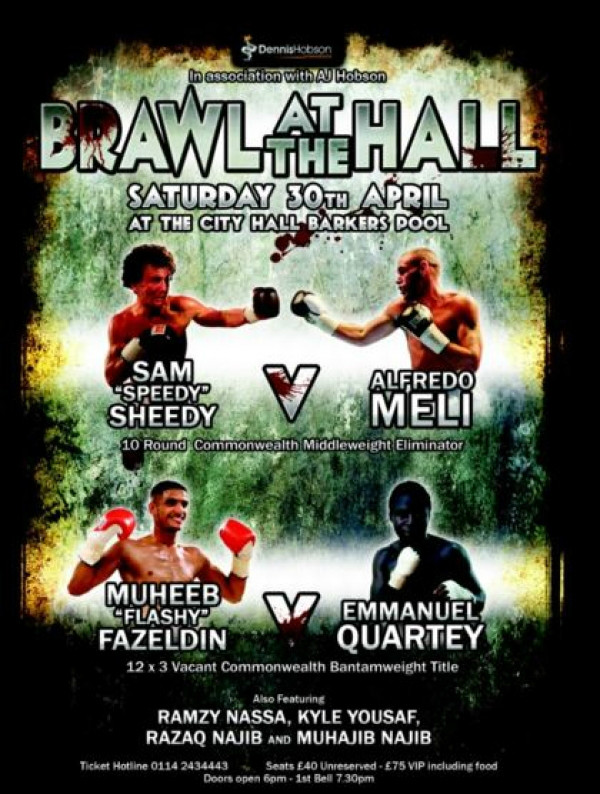 Dennis Hobson Promotions’ next two shows will take place at Sheffield’s City Hall on April 30 and May 28, with a trio of Sheffield fighters headlining the respective cards.

Sam Sheedy debuts at middleweight on April 30 taking on Belfast’s unbeaten Alfredo Meli in a Commonwealth title eliminator, with Muheeb Fazeldin also scheduled to face Ghana’s Emmanuel Quartey for the vacant Commonwealth bantamweight crown. While, on the May show Liam Cameron will challenge Jahmaine Smyle for the Leicester man’s English super-middleweight belt.

“I’m delighted we’ve got these two cards arranged after having to cancel our planned show earlier this month,” explained Hobson. “As usual we’ve got some real 50-50 title fights for the headliners, and they won’t fail to be exciting.

“I’m convinced Sam Sheedy can go really far in the sport. He’s moved up to middleweight, is punching harder and I think he’ll now start stopping kids regularly. Alfredo is a decent test, he’s unbeaten in 12 fights and we know he fancies the job, but Sam is a class act and a proper entertainer, so this’ll be a great fight to watch.

“I’m also really looking forward to seeing how Muheeb progresses. He could never be accused of being a wallflower, but will have to back up his confidence against this Ghanaian. Quartey has 19 KOs from his 20 wins, is obviously very heavy-handed and if Muheeb takes him lightly then he’s in for a real shock. It’s for a meaningful title with the winner in line for big things, so it’s a pivotal fight for both men.

“Liam Cameron has all the potential in the world but now is the time for him to start delivering on his talent. He’s had a couple of big title opportunities in the past that he hasn’t managed to take, but this is the perfect chance to make his move. The English title is a springboard onto bigger things so if he can beat Smyle then doors will open for him. It’s no easy task, Jamhaine is the champion and is very tough but if Liam is going to move onto bigger things then this is the sort of fight he needs to be winning.”