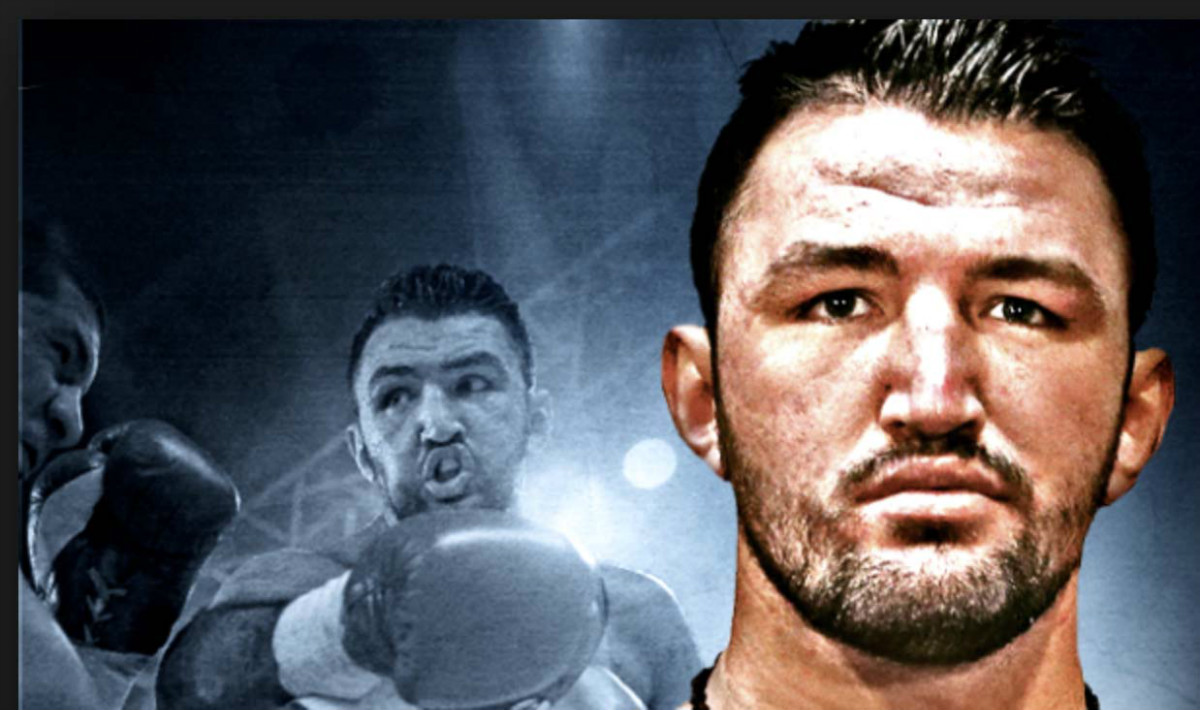 HUGHIE FURY WINS DECISION AFTER FIGHT GOING TO THE CARDS AFTER HEAD CLASH.

Fury, cousin of World Heavyweight Champion Tyson, looked in complete control of the bout before the referee stopped the contest in the sixth round after a cut to Fury’s left eye caused by an accidental clash of heads left him unable to continue.

New Orleans-based Kassi attempted to make life difficult for Fury by switching between orthodox and southpaw but 21 year-old Fury comfortably dealt with everything thrown his way. A low key third round saw Fury move from second gear into third, still dictating the pace of a tactical bout.

A nasty gash on undefeated Fury’s left eye began to open up after an accidental clash of heads in the sixth round. With blood streaming down the heavyweight prospect’s face an early stoppage loomed. The referee decided to end the title contest in the eighth round after taking a close look at the damaged eye.

With Fury unable to continue it went to the judges’ score cards. All three judges scored the fight in Fury’s favour (69-66, 70-64, 69-65) and the mancunian heavyweight destroyer took his record to 20-0.

Ryan Walsh emphatically defended his British Featherweight title against Belfast’s James Tennyson at Stratford’s Copper Box Arena. Walsh, 29, put his opponent down with two solid body shots in the fifth round before the referee waved off the contest at 2 minutes 34 seconds.

In a cagey opening round it was Tennyson who looked the more comfortable, earning Walsh’s respect with a series of solid straight rights. The second round started in a similar fashion before Walsh took control of the bout, landing a wave of stiff right hands on the Belfast man. Tennyson was down for the first time in the second round after Walsh connected with a crippling body shot.

A plucky response from Tennyson in the third bought him some time but Walsh, supported by his noisy Farmy Army, continued to take hold of the fight. History-making Walsh was making his shots count; picking Tennyson off with solid jabs.

Walsh carved his name into the boxing history records last September when he joined super-featherweight brother Liam as the first set of twins to simultaneously hold British titles and looked determined to keep hold of his prize.

The British title was won in the fifth round after the impressive Cromer star put Irishman Tennyson down with another crippling body shot. A brave Tennyson beat the referees count before the contest was waved-off at 2 minutes 38 seconds.

Belfast hero Jamie Conlan claimed the Commonwealth Super-Flyweight title from South Shields’ Anthony Nelson in what will surely go down as the fight of the year. The all-action Irishman finally won the gripping tear-up in the eighth round after putting the brave Nelson down for a final time.

In an explosive opening round both men were happy to trade huge blows. Conlan took the first round by dropping his South Shields opponent, despite already suffering from a nasty cut on his left eye.

In the second round both men continued to throw bombs at will in what was already developing into a classic. It was blink and you’ll miss it stuff at the Copper Box Arena as the gripping Commonwealth title dustup captivated the crowd.

Conlan went down for the first time in the third round after being caught by a solid shot from the resurgent Nelson. Fight fans around the world were witnessing a true barn-burner as both men threw everything they had at each other.

‘Baby Faced’ Nelson went down for a second time in the fifth as Conlan looked for a big finish. Amazingly, Nelson recovered again and began to take control of the bout at the half way point. 30 year-old Nelson appeared to be stronger after his second knockdown and began to dictate the speed of the fight.

Cromer’s British and Commonwealth super-featherweight Champion Liam Walsh defended his titles with an eighth round stoppage win over Troy James to retain both his titles on the same night that twin brother Ryan emphatically defended his British title against James Tennyson; another first for British boxing.

Walsh, who had been out of action since suffering a hand injury in the build up to his WBO world title eliminator against Petr Petrov, didn’t show any signs of ring rust as he soaked up an energetic flurry of shots form James.

Both men were made to miss in the second as confidence grew in each corner. 29 year-old Walsh picked his shots well and was the more effective of the two men. After being dubiously knocked down in the third James came back with vengeance, landing a series of well-timed combinations.

James maintained his impressive work rate in the fourth but the champion’s class begun to shine through. More quality shots from Walsh followed in the fifth as the world-title chasing man took control of the fight. A sapping body shot from Walsh in the sixth threatened to topple James before he regained his composure and returned fire.

A determined Walsh began to lay it on in the eighth, connecting with numerous razor sharp shots. The classy Walsh was determined to make an explosive return to action after a long lay-off and he certainly did that. James’ corner threw in the towel 1 minute and 22 seconds into the eighth round to seal a memorable night for the Walsh clan.

Ricky Hatton-trained heavyweight prospect Nathan Gorman announced himself on the professional stage with a first round stoppage win over Croatia’s Hrvoje Kisicek. The Mancunian mountain had his opponent down three times in the opening round before the referee waved off the contest at 2 minutes 48 seconds.

Erith man Lewis Pettitt made light work of Hungary’s Tibor Nodari in the third contest of the night. Pettitt was on top from the very first bell and dominated the ring throughout. The referee waved off the fight at 1:42 into round two and the former WBA International Champion came away with his nineteenth career win.

Naseem Hamed prodigy Tony Bange was made to work for his first professional victory and survived an early onslaught from all-action Teodor Stefanov. Bange found his feet in the third round after a nervy start to life as a pro. The Staines welterweight prospect summoned his explosive ‘TNT’ power midway through the third and has his opponent hanging on. 25 year-old Bange came steaming out his corner in the fourth and final round looking for a big finish. New boy Bange took the bout with a score of 39-36.

Enfield youngster Barney Joe Jones suffered his first professional defeat at the hands of Nottingham’s Dean Gillen. In the first barn-burner of the night Gillen came away with a points victory of 39-37. Both men put their all into an explosive slugfest.

24-year old Hornchurch debutant Sanjeev Sahota made a sensational start to life in the paid ranks with a first round stoppage over Latvia’s Nikita Gultjajevs. It took ‘SSS’ just 60 seconds to dispose of Gultjajevs after landing a series of punishing combinations.

India’s golden boxing boy Vijender Singh continued his march towards a huge summer homecoming with a punishing stoppage win over Frenchman Matiouze Royer. Singh wasted no time and had his opponent on the back foot from the off, finding his way past Royer’s defence with accurate uppercuts.

Afterwards Vijender said: “We had a solid game plan and I stuck to it perfectly. Royer is a tough opponent and made it difficult for me at times but he couldn’t handle my power and accuracy. I felt in complete control throughout the fight and it’s a shame the ref waved it off, I wanted more!

“It felt like everything I was throwing was connecting. I’m feeling stronger with every fight and want to carry on this momentum. I’ve got a huge Indian homecoming to look forward to this summer so it’s vital I get past my next opponent in Bolton.”

Francis Warren, Singh’s promoter, said: “I’m very impressed with Vijinder tonight. He’s showed everyone what he’s capable of and I’m excited for his future. He’s completely dedicated to his training and it showed tonight. He looked levels above Royer, who’s rarely stopped. Everything is shaping up nicely for his July 16th homecoming, all he needs to do now is get past his May 13th bout in Bolton.”

19 year-old Super-Featherweight puncher Boy Jones Jnr picked up his eighth career win with a classy stoppage over Hungary’s Aron Sziagyi. Boy Jones unleashed a relentless barrage of powerful shots on the retreating Sziagyi who was pulled out of the contest by the referee two minutes into the fourth round.

Unbeaten power-punching 22 year-old Joe Pigford blew away Warwick’s Mike Byles inside three minutes to pick up his tenth pro victory. Pigford has been out of the ring since July last year but showed no signs of ring rust in an impressive first round blitz. The Southampton super-welterweight man brought home the bacon, much to the delight of his noisy travelling supporters.

Sidcup’s D.P Carr overcame Sheffield’s Qasim Hussein to claim his fourth professional victory at Stratford’s Copper Box Arena. 25 year-old Carr was on top throughout the contest and came away with a comfortable points victory. All-action Carr repeatedly found his way past Hussain’s patchy defence and made use of his explosive one punch power. The referee scored the bout 40-36 on Carr’s favour.

Ilford light-heavyweight destroyer Anthony Yarde racked-up another brutal knockout win over Bulgaria’s Tzvetozar Iliev tonight at the Copper Box Arena. It’s now five knockout wins in six professional fights for the slick and powerful 24 year-old. A huge uppercut in the second round wobbled Iliev before Yarde sent his man crashing to the canvas with another solid shot.

AKEEM ENNIS BROWN "YOU'RE GOING TO HAVE A NEW BRITISH AND COMMONWEALTH CHAMPION COME SEPTEMBER!"

JOE GALLAGHER: “WHEN TASHA LOST NOBODY CAME TO CHECK ON HER, ITS FUEL FOR THE FIRE!”

FINEST GYM COACH STEVE MAYLETT BACK TO IT! SAYS TERRY FLANAGAN IS FITTER THAN HE HAS EVER BEEN!

THE ONE, THE ONLY, HARRY GREB

INSIDE THE TRAINING CAMP OF ALL TIME GREAT JOE LOUIS

FLASHBACK: MICHAEL JENNINGS KO OF JIMMY VINCENT IN ROUND 1 TO BECOME BRITISH CHAMPION!

THE "BLACK FLASH" PAT BARRETT - FROM FIGHTER TO TRAINER AND PROMOTER

EDDIE HEARN HAS FANS CREASED OVER LAUGHING AFTER THIS AWKWARD MOMENT

MIKEY RAMABELETSA, THE CHAMPION NOBODY WANTS TO FIGHT?

18 DAYS TO FIND A REPLACEMENT! TROY WILLIAMSON “NOBODY WANTS TO FIGHT ME!”

MICKEY ELLISON: "I WANT TO TEST MYSELF, SEE HOW GOOD I AM AND HOW FAR I CAN TAKE IT!"

MIKE MCGOLDRICK TRAINED OUT IN LAKE DISTRICT DURING LOCKDOWN BUT HAPPY NOW TO BE BACK IN THE GYM!

LIAM CONROY BACK IN THE GYM READY TO FIGHT! HOPING GOLDEN CONTRACT TOURNAMENT CAN BE RESCHEDULE

SAM NOAKS: LOOKING TO MAKE IT 4 CONSECITIVE KO'S AT THE BT TOWER LONDON

LUKE EVANS: JOINS MATTHEW HATTON FOR FRESH START "I NEARLY WALKED AWAY FROM THE SPORT!"

'THE SAVAGE' SAM EGGINGTON ALL SET FOR TED CHEESEMAN CLASH: "THIS FIGHT WILL END UP A WAR!"

CAMPBELL HATTON: TALKS TURNING PRO, LEARNING ON THE JOB AND NEXT STEPS IN THE GAME

MATTHEW HATTON: DISCUSSES HOW INSTAGRAM HAS CHANGED BOXING, UPADTES ON STABLE AND DATES IN OCTOBER