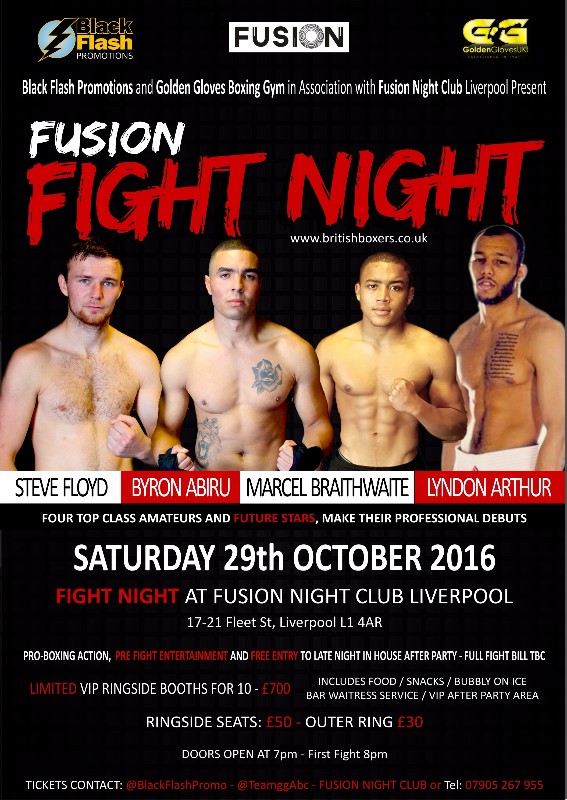 Black Flash Promotions in conjunction with Golden Gloves Gym will hold an exclusive night of professional boxing and entertainment at the Fusion Nightclub in Liverpool on Friday October 29th, featuring some of the Northwest’s highly rated rising prospects.

Fusion Fight Night is being held in one of the most popular night spots in Liverpool’s vibrant Concert Square, a great venue for small show boxing, where all patrons get a great view of the ring.

Boxers confirmed for the bill are former GB representative Lyndon ‘King’ Arthur a fighter being tipped to take the British light-heavyweight scene by storm in the coming years. Arthur made his professional debut last weekend on the Crolla vs Linares bill at the Manchester Arena to get his promising career off and running and he is a exciting addition to this bill.

“Lyndon has got going now in the pro’s and if he keeps focused and working hard he will have a great career ahead of him.” said Pat Barrett, Arthurs uncle, trainer and Black Flash promoter.

“He will learn his trade correctly and having him perform on the Liverpool show with the other rising talents we have and keeping him busy is important for his progression. We are very pleased with Lyndon and how he has come through, boxing on the GB squad and in the WSB has been good for him, but now the serious business begins.”

Also making his anticipated professional debut is former amateur standout Marcel Braithwaite who is already being tipped for the top. The former Golden Gloves amateur competed in the senior ABA championships for three years on the bounce – reaching a semi-final 2015 – before a disappointing exit in this year’s regionals.

A national novice title in 2013 underlined his potential to succeed in the sport and now he is expected to become a star attraction in British boxing.

Also appearing in their home city, will be Byron Abiru and Steve Floyd, both also members of the Golden Gloves Liverpool and like Braithwaite trained by respected Merseyside coach Wayne Smith. who speaks highly of his charges.

“Marcel has got big, big ambitions,” said Smith. “He’s made this decision to turn professional for the right reasons, and he is ready for it. Marcel is super confident in his ability and so are we. He’s talking titles and that’s great. I believe he is destined for big things but we will take it slowly and under Black Flash Promotions build him and the other lads the right way.

“If you ask Marcel who he wants to be like he just says he’s unique, ‘I want to be like me’. He doesn’t want to replicate anyone else but himself, the fans are in for something special, they will enjoy watching his career.”

“In Byron and Stevie, we have two dedicated lads who have been with me a longtime at the Golden Gloves and have made the decision to turn over pro. Both are tough, tough lads and will be a great addition to the paid ranks. We will guide them through their careers and in the coming years, the Golden Gloves Gym Liverpool will have professional champions again.”

Come to the show!

Limited tickets are available, small capacity venue, so tickets are on a first come first serve basis and are on sale now. They will be available from all the boxers on the card – or Fusion Nightclub www.fusionliverpool.com or by contacting @BlackFlashPromo  @TeamggAbc or calling; 07905 267 955.

Tickets are priced at £30 standard – £50 Ringside – Plus we have 10 exclusive VIP Ringside Booths available at £700 each (Booths are for up to 10 people and includes food, snacks, bubbly on ice, and complementary drinks, plus bar waitress service, plus full use of the booth for the after party inside the club with the boxers, VIP area access with special celebrity guests, late into the night)

Fusion is Liverpool’s most exciting night time experience. Situated in the busy Concert Square area, (17-21 Fleet Street, Liverpool) it is one of the liveliest and most popular clubs in Liverpool. Hosting some of the best DJs, biggest PAs and regular student nights, Fusion offers something for everyone and look forward to hosting this exciting professional boxing show.

Exclusive booths are available for all-night bookings and VIP treatment. Pick from a range of spirits, bottles and cocktails to create your perfect drinks package. Click here to book one of VIP booths now.