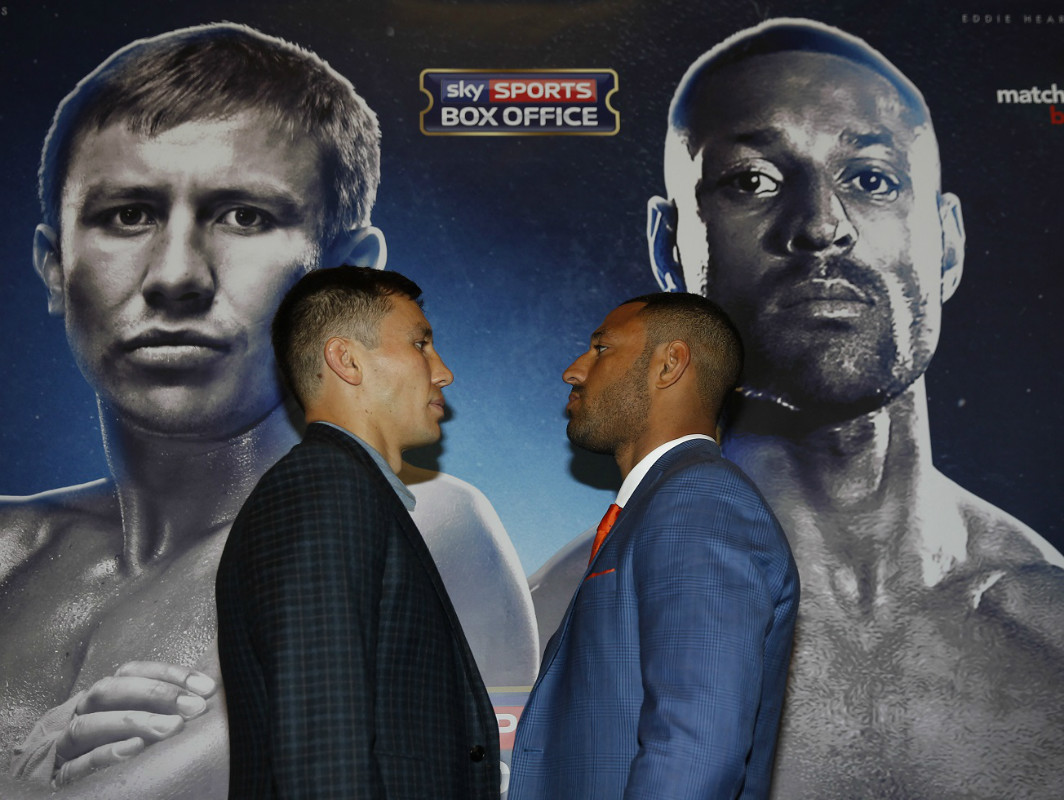 BROOK: I’M SO DANGEROUS UP AT MIDDLEWEIGHT

Kell Brook says that his move up to Middleweight to face Gennady Golovkin will bring out the best in him as they clash for the WBC, IBF and IBO World titles at The O2 on Saturday night, live on Sky Sports Box Office.

Unbeaten IBF Welterweight champ Brook has made the move to 160lbs to land the blockbuster fight he’s been looking for since ripping the crown he holds from Shan Porter in August 2014.

The Sheffield star told today’s press conference that he’s excited to face the most feared fighter on the planet, and is warning the unbeaten Kazakh-KO merchant that he’s got the power to take his titles away.

“I’ve looked death in the face so this is a doddle,” said Brook. “You’re going to see me perform to my peak – I’m going to be first with the jab. When he feels the power that I have that’s going to be a strong, powerful and quick Middleweight hitting him, not a Welterweight. I’m going to put it all together.

“Golovkin is like Mike Tyson – people have lost before they even get in there with him. I’m not interested in what he’s going to do, I’m focused on what I need to deliver to win.

“I get slagged off for fighting my mandatories that are forced upon me and now I am getting slagged off for stepping up to meet Golovkin. I am happy with the decision to make this enormous fight and the sold-out crowd and the viewing figures on TV will prove that this is a massive fight.

“Everyone in boxing knows that I am a big guy. People who don’t know think that the weight is going to be an issue. I’m more vicious in sparring when I am around 160lbs or coming down from heavier than that, that’s where I am healthier in training and I can give so much more output in the gym, and that means the full 100 per cent will come from me in the fight.

“The fans pay our wages and I want to give back to the fans. I have been telling them for ages that I want a big fights and they haven’t believed me. They don’t know the politics that go on behind the scenes through no fault of my own. I’ve had injuries, mandatories, it’s been hard to get big fights, and as soon as there’s been the window of these big fights happening, I’ve been let down by people not wanting to dance.

“I’m going to follow the greats and make history. The likes of Felix Trinidad, Sugar Ray Robinson, Sugar Ray Leonard, Floyd Mayweather, Manny Pacquiao have all moved through the weights to prove they are greats at all weights. There’s a small window of opportunity to do something special and I am going to take my chance to prove that I am a special fighter.”

Brook and Golovkin top a blockbuster night of action in London with two more mouth-watering World title clashes as Lee Haskins defending his IBF World Bantamweight title in a rematch with bitter rival Stuart Hall, who he met for the European strap in July 2012, and Charlie Edwards challenging for a World title in his ninth pro fight against two-weight IBF Flyweight champion Johnriel Casimero.