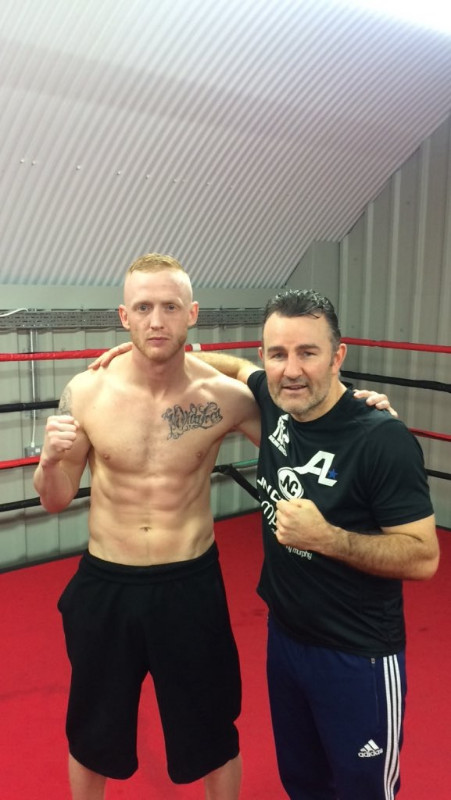 Preston middleweight, Mick Hall, has revealed his forthcoming contest for the Central Area title in Wigan in December is his last chance to redeem himself.

Hall, who has lost just once in 15 paid outings, faces current belt holder, Barnsley’s Matthew Mallin, on 10 December at the DW Stadium. Here, the revitalised 30-year old has promised a standout performance to prove – not only to himself, but also his family and friends – that he has what it takes to reach the top in a sport were the lack of discipline he has shown in the past can often be severely punished

The former Prizefighter quarter-finalist admitted that, despite still winning, he had only been ‘playing’ at the sport in recent years and hadn’t come close to fulfilling his full potential. Following a change of management, to Neil Marsh, a shift in focus and a renewed belief in his own ability however, Hall has shown better form of late. December, he says, will be proof of that improvement.

He said, “The Central Area title may not mean that much to some, but for me, it’s my world title and I’m not going to waste the chance of winning it and moving my career on towards were it should really be.”

In a brutally honest assessment of both his own ability and actions, Hall also revealed a strong sense that he had squandered his talent, alienating many in the process.

He said: “It’s no secret I’ve had problems outside the ring. I’ve been stupid with drugs and drink and, to a certain extent, I’ve wasted a year or two really. When I turned over a lot of people believed in me and thought I’d go far but, even though I’ve only lost the once [to hot prospect and Blackpool rival Jack Arnfield in February 2015] I feel I should have done more. I was given a lot of chances by a lot of people but I didn’t step up – the Central Area belt is my last chance to show everyone I’ve changed. I’m not going to turn that down. Since the fight was announced I’ve been focussed on it 100%. It sounds mad but I never really did that before.”

“Since working with Alan [Levene – his trainer], everyone at his gym and all his contacts, including Dr George Wilson at Liverpool John Moores University [a leading sports scientist] I’ve found a new focus. I love training now. I love going the gym. Everyone works hard, really hard. I can see the improvements I’m making day after day. I feel stronger, fitter and I’m hitting harder than ever. I feel like a new man I really do. This chance that Neil has given me? To fight for my first title? I’m not going to waste it. I’m looking forward to it and, once I’ve won it, I’ll look forward to, and plan for, bigger and better fights in future.”

A decent amateur who was unlucky enough to meet the likes of Liam Smith and Hosea Burton in the regional ABAs, Hall turned pro in November 2009 but had only six fights in his first three years as a professional. Two in the next two years slowed his momentum but five wins from his next six outings, despite his problems outside the ring and including that split decision loss to Arnfield (now the WBA International middleweight champion), showed he retained a level of natural ability – an ability that Levene believes he has helped galvanise.

A former pro who faced problems of his own outside the ring during his own professional career in the 1990s, Levene said: “Mick has always had great potential. Everyone knew it but, even though he was still winning, he just didn’t transfer this into actions outside the ring where, if you want to do anything as a pro, you have to be professional and disciplined at all times. I’ve been there myself though. I know what it’s like. I’ve been able to use my own experiences, plus his undoubted ability, to help Mick regain the confidence and optimism he once had and focus it on winning what will be a great belt for him. With Neil’s backing I’m convinced Mick can win and move onto even bigger titles in the next six months.”