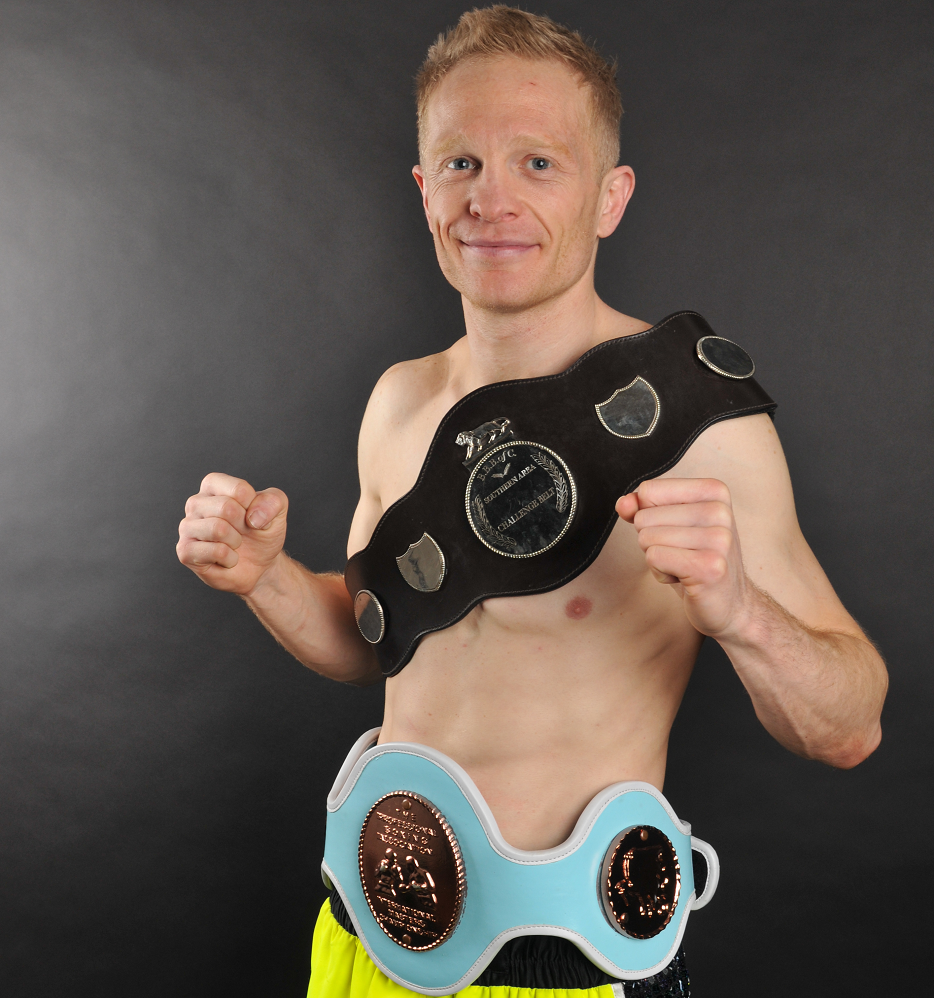 On December 3rd at the legendary York Hall in Bethnal Green, two former gym mates stood in opposite corners to do battle for the coveted Southern Area Lightweight Championship, with a full house loudly looking on.

The Lutonian looked strong and powerful at the 135lbs weight limit, whereas the Devon-born Day looked very light in comparison.

The warring pair, each aiming to become a two-weight Area titlist, were respectful to each other in the build up to the 10-round championship contest and post-fight, too, but as the bell sounded, friendship went out of the window.

The opening round saw Devine as the more aggressive fighter, as expected, and his counterpart casually swaggering around with his hands low.

Devine’s greater intent paid off as he pressed forward at every opportunity and consistently landed when in close. When entangled, Day waited for officiating referee Lee Cook to call for a break but when it never came, Devine roughhoused him and landed effective close-range hooks to the head.

Midway through the second round and a thunderous right hand put Day down for the first time in his five-year long career.

Dazed but still able, Day picked himself up and walked to the corner, and, when instructed to, he capably walked forward in a straight line to display his awareness to the official, who questionably waved the fight off to a chorus of complaints from Day and his corner.

“I was fine,” said the 38-year-old trained by Rod Julian. “No disrespect to Michael Devine because he hit me with a bloody blinding shot but I was absolutely fine.”

Day, who owns Ringtone Boxing Gym in Central London, claimed to have suffered from a training camp fraught with difficulties that meant he could only dedicate three weeks of preparation towards the championship bout.

“To be honest, I probably shouldn’t have fought,” he admitted. “I never ever thought I’d be put on my arse, but two suicides to deal with, up and down the country visiting my friend in hospital…I’m not making excuses because he caught me with a good shot, but it wasn’t the perfect camp; it was a three week camp, but it’s all experience.”

Critics were quick to question Day’s uncharacteristic performance in which he arguably took more shots in two rounds than most of his previous 10 bouts.

“It’s about adapting isn’t it,” he justified. “He’s coming forward to kill me like a bull in a china shop so you’re gonna’ get hit.

“It would have taken me a couple of rounds to start confusing him but it was all over too quick, but I’ll learn from it.”

Prior to the December 3rd bout, Day had fought just 10 times in five years. At 38, his advanced age has never bothered him, jokingly referring to himself as ‘Benjamin Button’, however, following two losses with aspirations to become British champion, Day is looking to press on in the New Year.

“I want to fight more because I’m 38 now,” the Devonian-turned-Londoner admitted. “There’ll be March shows at the York Hall that I’ll be looking to get on.

“I’ll be dropping down to featherweight because I weighed in for my last fight with all my clothes on with two mobile phones in my pocket. I walk around at featherweight level when I’m not in training.”

Day previously won the super-lightweight Southern Area strap with a first round stoppage over Ryan Taylor in December 2015, but now plans to compete for titles at featherweight – three weights below. He attributes his weight and strength to his Vegan diet, often referred to as ‘The Vegan Boxer’.

In March, he vacated his 140lbs title to drop down in weight to challenge for the lightweight version but narrowly lost to Floyd Moore in a barnstormer of a fight, which was recently acknowledged by Boxing News Magazine as one of the best fights of 2016.

Devine was next in line to challenge Moore for the 135lbs belt but the champion from Fareham withdrew with injury, consequently vacating the title, and Day was immediately put forward by promoter Steve Goodwin to contend for the available belt.

“I still don’t count them as losses as I should not have been stopped in that last fight and the first one with Floyd Moore was just a bad decision, but bless the struggle!” he concluded.

The Southern Area featherweight title that Day is now eyeing swapped hands on the same night on December 3rd when Josh Kennedy (8-0) relieved Jamie Speight of the belt that he had held for over two-and-a-half years.

The heavy-handed ‘Handsome’ Josh Kennedy, 25-years-old from Kent, floored Speight with a rocking right hand early in the third round and the contest was stopped at the midway mark when it was clear the champion could not continue.

Unbeaten Kennedy next challenges Sean ‘Showtime’ Davis (11-0) for his English super-bantamweight championship on March 18th at York Hall on a Goodwin Boxing event – Day is readying himself to fight on the same show.

Ben would like to thank his sponsors, Ringtone Boxing Gym and PR Manager Tim Rickson