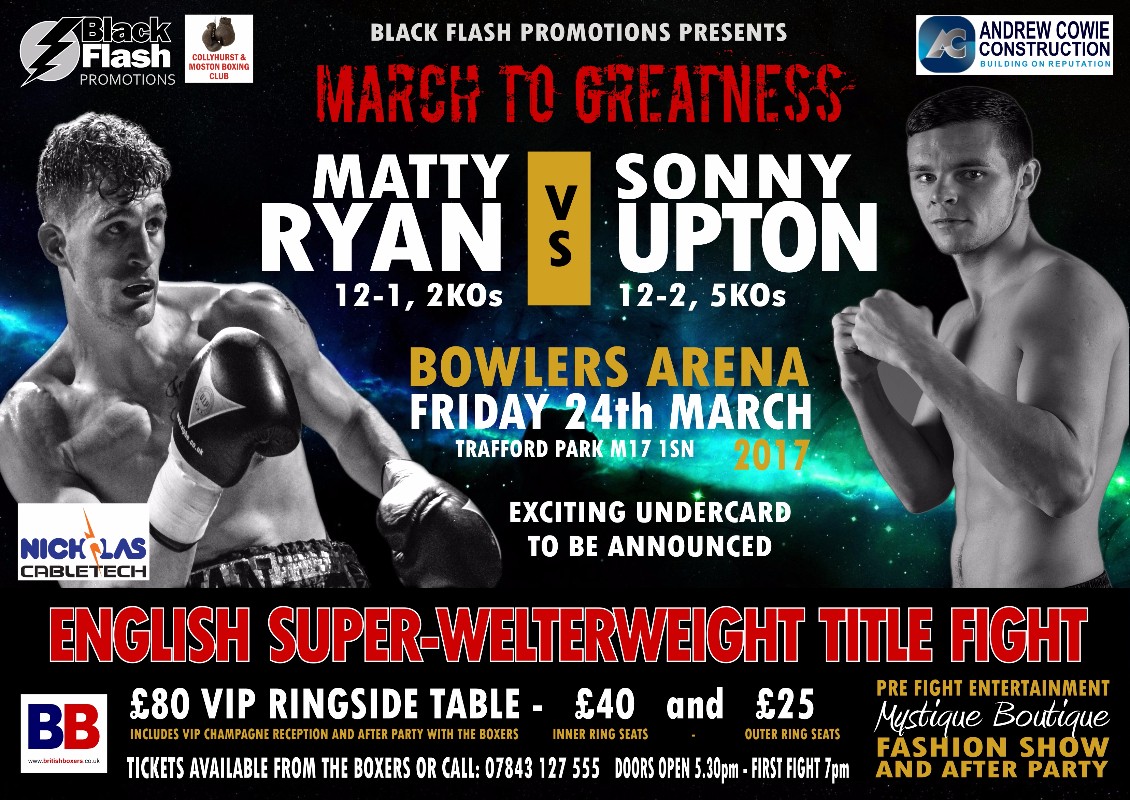 Matty Ryan (12-1, 2KOs) will now take on Sonny Upton (12-2, 5KOs) for the vacant English super-welterweight title at the Bowlers Arena in Manchester on Friday 24th March, after schedule opponent Macaulay McGowan pulled out this week with a back injury.

Ryan, 26, from fight town Middleton in Manchester was originally set to take on Rick Skelton, but he pulled out with an injury. In stepped the unbeaten McGowan to take his place and set up a mouth watering all Mancunian derby, until he fell to the same fate as Skelton.

This week Black Flash Promotions had to act quick to get a suitable replacement opponent into the British Boxing Board of Control in place of McGowan and Sonny Upton, 27, fit the bill, having been in waiting for a shot at the title anyway, and this makes for a great fight.

Both boxers are in a rich vein of form and have earned their shot at domestic honours. The English title is a prestige belt to own in British boxing and is often seen as the first real spring board to making the step up through the levels in the sport.

This is a 50/50 affair in most peoples eyes and will make for an intriguing match-up. Ryan says he is refusing to be affected by the withdrawals and late change of opponent and says whoever he fights for the title, he knows it won’t be easy and he will have to perform to his best.

“I am actually going past caring who I fight, as long as I have a creditable opponent thats all that matters. I will be there on the 24th I know that much and I plan on taking that belt home.

“Why McGowan pulled out who knows? I heard it is because he injured his back at work or running or something, but he probably just sobered up and realised what he had got himself into and got scared so I’ll just move on. It isn’t good because I had trained to beat him and I would have done. But I will have to now change the game plan and adapt.

“Sonny Upton is defiantly a better opponent, in fact you could say he is ahead of me and deserves this shot more than me. I am rated No26 in the British rankings and Sonny is at No6, so in that sense it is a big step up for me in terms of positioning, so this is a great opportunity to leap frog the rankings.

“I know he brings a lot of fans with him and I hope to get a lot coming so it should make for a cracking atmosphere at the Bowlers, I can’t wait now. It won’t be easy, I will have to be at my best and I will be.” added Ryan.

Matty has been away in training camp up in the Lake District with his coach Pat Barrett and has been training harder than he ever has. “We always train hard and push ourselves, but in this camp we have gone further.” added Ryan

“We have added things to our camp, had great sparring with the likes of Jack Arnfield and of course my gym mates who are all good, so I’ve left no stone unturned, I have worked myself to a standstill at times, I really couldn’t have done anymore and I am ready for whatever my opponent brings.”