Floyd Mayweather: “I love England, I wanted to fight in England” 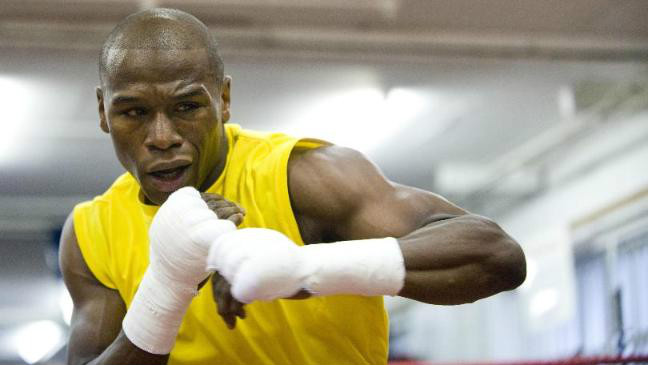 Floyd Mayweather says he always wanted to fight in England but never got around to it, but didn’t rule out if he fights again, his 50th outing could be in the UK. The former pound for pound king of the ring eluded that he may fight again when speaking in an exclusive interview with BT Sport’s Rio Ferdinand.

Mayweather also speaks about the upcoming fight between his rising starlet IBF super-featherweight champion Gervonta Davis against Britain’s Liam Walsh, which Mayweather has been organising while on his visit to the UK.

Mayweather also speaks about a potential clash with MMA kingpin Conor McGregor and fighting Manny Pacquiao in this interview which will be aired this weekend on BT Sport. Here is a segment from it.

“I love England, I always loved England. At one particular time I wanted to fight in England – that didn’t happen, but a lot of people are asking me about number 50 so we just don’t know at this particular time, but we don’t know what the future holds.”

Mayweather on his 50th Fight:

“It will be against a fighter and that’s what important. Giving the fans excitement. I want to go out there and compete again. No matter if it’s a boxing fighter, or an MMA fighter. A fighter’s, a fighter when it’s all said and done.”

“We don’t overlook anyone, but at 130(lbs) the two biggest hitters are under Mayweather Promotions and one of those guys is Gervonta ‘Tank’ Davis. We know he has dynamite in both hands. The left hook, the right hand. He don’t shy away from no competition… When you look at him though, when he walks in the room… I looked at him before I even saw him box, I thought, this kid has star written all over him.”

“To be in the biggest fight in boxing history. My mentality going into the fight was take advantage of the moment. Take advantage of the situation because when the history books are written you don’t want to say you made any mistakes. I went out there I was just smart and sharp and it doesn’t matter if no one was pleased. That particular night the most important thing was having my hand raised and being smart. I’ve given everybody a lot of blockbuster fights and every fight is not going to be the same but for me I’m going to always go out there and give 100 percent because it’s about giving 100 percent. 100 percent doesn’t always mean you’re going to knock the guy out. My 100 percent is this – always giving people the best no matter what the situation is. If you’re in a boxing gym giving the best, if nobody is around give the best. It’s always about giving the best. That’s what I’m gonna do – I’m going to continue to give everyone around the world the best performance I can possibly give you.”

“We are waiting on you Conor what’s going on? We’re waiting to fight – you talking about you want to fight. Let’s see if you’re really real. Let’s make the fight happen. When I fought Oscar De Lay Hoya, when I was the B side and he was the A side I didn’t complain. I said I know where I’m trying to go to, I know where I’m trying to get to, give me the money and let’s make it happen. Before you can come the A side you must be the B Side first. Financially wise I had to be the B side for that fight, but then after that fight, I earned a spot. So if Conor McGregor wants the A Spot, don’t cry and complain about the money. Be the B fighter, go out there and do what you have to do and you possibly can get a victory you can be the A side.”

‘Watch ‘Rio Meets Floyd Mayweather’ on BT Sport 2 from 9pm this Saturday. You can also watch Gervonta Davis v Liam Walsh for the IBF Super-Featherweight title on Saturday 20 May live on BT Sport and BoxNation. Follow @BTSportBoxing on Twitter for all the latest news’