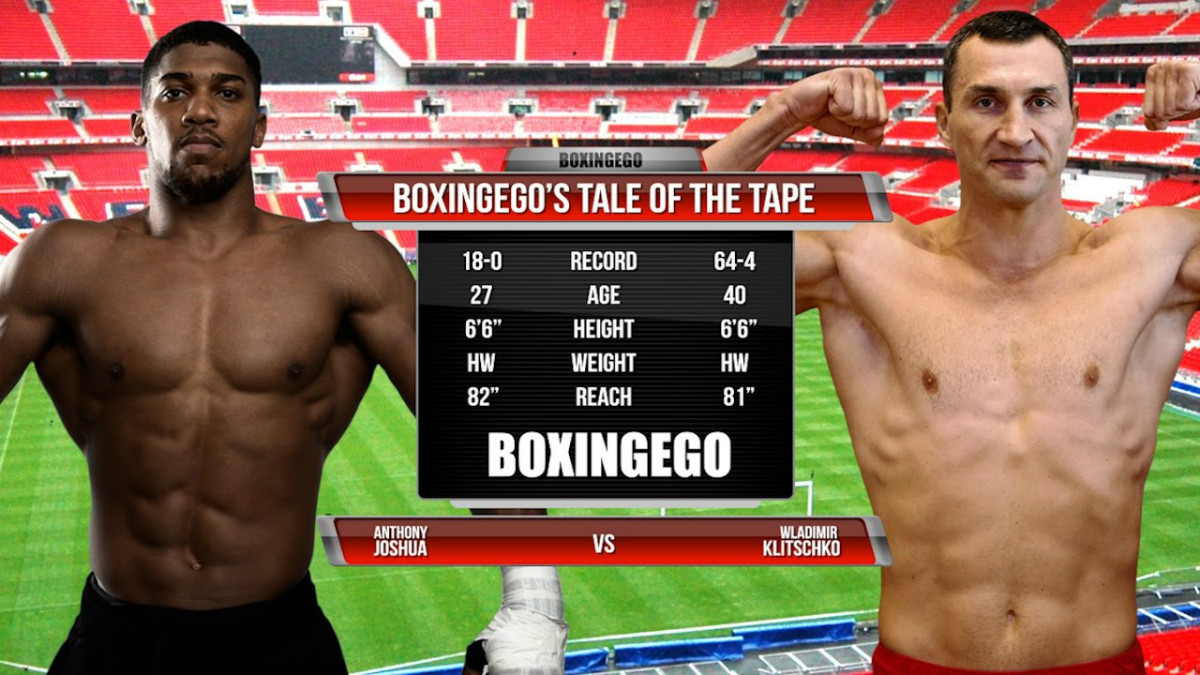 It is an intriguing contest, though not one of the ilk that the Matchroom media machine will have the naive viewers believe it is, largely due to a November night in Germany in 2015, and the machinations of a certain Tyson Fury.

The cliché of time immemorial; the young lion slaying the elder head of the pack has already been fulfilled, though SKY boxing appears to have erased this into the broadcaster’s abyss when promoting this encounter.

This has clearly not affected ticket sales; with 90.000 (sorry Carl Froch) fans purchasing their piece of boxing history and admission to the fight Wembley Stadium.

My Heart should burst with British pride. AJ is perceivably the clean living, inspirational golden child of domestic and perhaps world boxing. He is our own and is setting a record, getting there. Yet I am swayed towards Klitschko and believe he could upset the Joshua gravy train this evening.

To me, as a lifelong boxing fan, we are being pilfered from somewhat. Anthony Joshua is a poster boy for a new boxing demographic. No longer is boxing the weekend preserve of the many; or the great affordable working class sport it was for the mainstream supporter, but it is now catered for the few.

Many households part with their hard earned cash to watch the boxing as part of a subscription sports package. This is a costly expense. Joshua; whilst setting attendance records; heads a promotion tonight that is also commanding a higher pay per view fee than previously seen for boxing, of £19.95.

This may not perturb those who are charmed by Joshua’s KO laden record, hoping to see a violent end to proceedings and who have no concern for the undercard, though for myself, said undercard should present an appetiser for the main show and should always justify in part the fee for the main event.

Less appetiser, more starvation in fact. Luke Campbell’s Darleys Perez outing is interesting, particularly if he can outdo Anthony Crolla. Though Scott Quigg fighting in a Featherweight final eliminator for the IBF title is questionable, given Quigg’s infancy at the weight and garners little excitement within me.

The PPV fee is a nod towards the popularity of AJ. The mass appeal generated by the match room media machine. Whilst Joshua is undoubtedly exciting, why should the public, once so used to boxing being savoured in the mainstream, be forced to part with extra cash for the privilege of said excitement? It is good business I suppose, but it demeans the support of the faithful who have long supported British boxing before the pay per view broadcasting glut arrived.

Bringing things back, my “sway” towards Klitschko winning tonight’s fight stems from a desire to see the possible derailment of the idea that pay per view is the norm.

A lot of decent fights in recent memory on the SKY platform have found their way to this medium. It is wrong. Joshua’s rise was not the instigator of course, merely the accelerator. Whilst AJ is unbeaten, the situation will surely persist.

If Klitschko can turn back the fabled hands of time, he will need to call upon every strand of experience from his 19 year career. Klitschko is not afraid to spoil an opponent’s advance to establish his own pattern of dominance. Holding and mauling are particularly prevalent in his arsenal of tricks and this may need to be adopted early should Joshua attempt to walk forward in his tank like fashion.

Joshua will need to ensure that Klitschko cannot use the rapier like jab we are accustomed to seeing from Klitschko, as such a weapon can assist in piling up the points and subsequently winning rounds.

Joshua’s lack of experience past the halfway point of fights could be a deciding factor in the outcome. Joshua’s heavily muscled frame, akin to that of former WBC champion Frank Bruno, may present stamina issues. Dillian Whyte’s intrusion onto Joshua’s chin also caused questions to be asked on this.

If Joshua can set a frantic pace and keep Wlad from setting the pace with the jab, I predict a stoppage as Joshua rocks Wlad’s fragile chin. If Wlad can weather an early storm, he takes it by late stoppage in a tense affair.