Groves: “DeGale made the correct decision.” 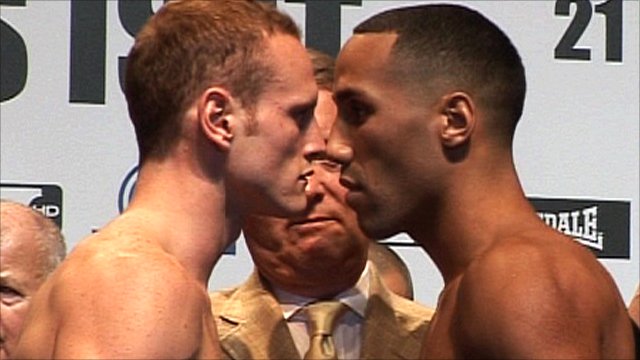 George Groves believes his old foe James DeGale made the correct decision not to enter the World Boxing Super Series.

Groves who previously came out victorious against Chudinov to be crowned WBA world super-middleweight champion and No 1 seed in the new tournament will have four British fighters in the eight-man line-up.

IBF world champion DeGale is recovering from a serious shoulder injury since coming off a unification bout with Badou Jack which ended in a draw and although Groves has questioned the timing of the operation, he understands why his old enemy is not part of the competition.

Groves has been quoted as saying “He definitely wouldn’t have been ready because he’s had surgery that’s put him out for a while,”

“I don’t know if he’s had surgery so he doesn’t have to have the pressure of entering this tournament. Who does? Only he knows.

“But these fights are thick and fast, so you’ve got to be healthy to begin with to even stand a chance of making it the distance, so most elite fighters have two fights a year maximum, some are down to one a year – this is three fights in 10 months.

“You’ve got to be on your game. You can mask or carry injuries and you’ve got to be set to fight. Because of that, this tournament’s format wouldn’t have suited James, so he’s out.”

Second seed Liverpudlian Callum Smith, who picked former European light-heavyweight champion Erik Skoglund for his opening fight, will face Groves in the final for a showdown should the pair go on to win each of their two fights.

The WBA and WBC Diamond belt, as well as the inaugural Muhammad Ali Trophy, will be on the line, with the winner needing three wins to be crowned champion.

Groves went onto say “It took me long enough to win one. I didn’t know how long I was going to wait before getting another one, but in these special 10 months I should be a unified world champion,”

“The first fight I am going to treat like my first defence of a world title. There will be a lot of pressure on all of us, and we’ll see how they can handle the pressure and keep their heads, but it’s going to be really exciting.

“Being the only current world champion, I was rightfully No 1 seed and in and around the favourite, but there’s no easy fights. It’s all up for grabs.

“This still shows the strength in the division and there are four Brits, including me, who are in and all have relatively big names in the UK.

“It makes some really exciting fights we are going to get domestically because our paths have to cross – like Jamie Cox to start.”