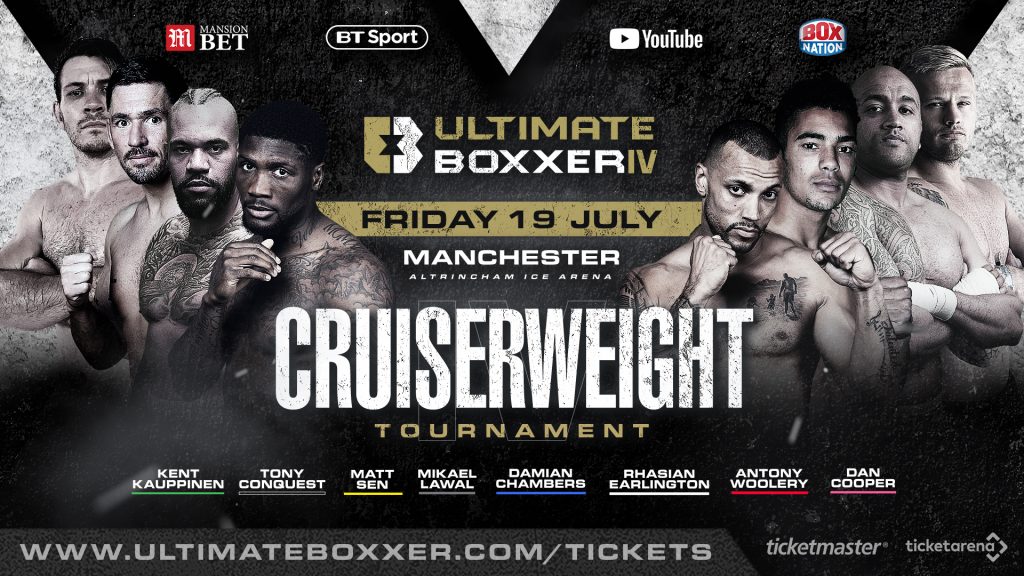 LIVE ON BT SPORT THIS MONTH

ULTIMATE BOXXER are delighted to announce the next installment of the Ultimate Boxxer series with what could possibly be the most explosive show to date as 8 big hitting Cruiserweights clash on Friday 19th July in Manchester, at the Altrincham ICE Arena.

UBIV, sponsored by MansionBet, will be televised exclusively live on BT Sport 1 and the dedicated boxing channel BoxNation as well as for free on BT’s Sport’s YouTube platform.

Following the thrilling middleweight event in London, UBIV powers into the red-hot Cruiserweight division for potentially its most explosive tournament yet with the choice inspired by the unforgettable Cruiserweight clashes of recent times, involving the likes of Olexandyr Usyk, Tony Bellew, Murat Gassiev and Maris Bredis.

ULTIMATE BOXXER features eight all action fighters that all hold ambitions to make a statement on BT Sports massive platform in order to propel themselves into title contention.

Ben Shalom, founder of ULTIMATE BOXXER, said, “Carl Greaves [Ultimate Boxxer matchmaker] has put together a brilliant line up which is going to guarantee fireworks and I believe this installment of Ultimate Boxxer is definitely the most exciting card to date.

”The Cruiserweight division has been at the forefront of world boxing in recent times, will fighters like Usyk, Haye and Bellew amongst others emerging as global superstars from the 200 pound division as they went on to stardom in their own unique way.

”We have always aimed to make Ultimate Boxxer a platform for boxing’s next star and I believe this lineup has all the tools to develop a potential superstar in a globally thriving division. I believe that we will find a future star on July 19 at the fantastic Ice Arena in Altrincham.”