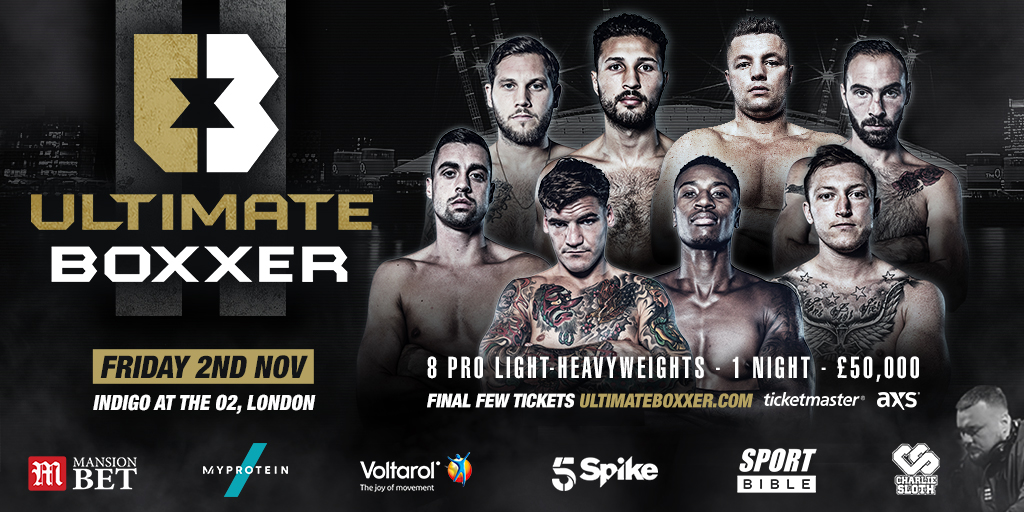 It’s just physics: when certain chemical elements get in touch, they naturally produce an explosion. Put a £16.000 cash reward in front of them and the process will be even faster and pyrotechnical. The chemistry of matchmaking worked out a treat again in Ultimate Boxxer II- Light Heavyweights yesterday night at the Indigo in the O2.

And once again the Golden Robe went back to the Eastside Boxing Club in Birmingham, represented by rising prospect Shakan Pitters, who ticked every box with a fine display of power, technical ability and tactical intelligence that enabled him to deal with whatever was in put in front of him, even more experienced opponents. But, full credit to the 7 other contestants of the night who really gave their all in this 3 rounds fights elimination tournament. This how it happened…

Pre-tournament favourite McIntyre started the first round charging forward and quickly knocked Church down with a straight right hand but failed to finish him off although having him on the ropes under attack till the bell. Joel was still on the front foot in the second jabbing his way in and trying to close the gap to work the body. In the third, Darrell managed to land on the counter but it wasn’t enough to save the result which saw McIntyre moving to the semi final by unanimous decision with all three judges scoring 30-26.

The gulf in class between the two fighters was apparent from the start as Spelman dominated the action scoring effectively with 1-2 combinations, hooks to the head and body shots. The left hook turned out to be the key for Dec in the second. A left hook knocked Horsfall down shortly after the bell. Sam fought furiously to survive but left himself open in the process and touched the canvas again, this time courtesy of a Spelman’s right hand which he then capitalized on with another left hook that finished the job at 2:39.

Enters Shakan Pitters. His tall and lanky frame reminds of a young Tommy Hearns. After using the first round to adjust and find his range, Pitters put Smith down in the second with a left hook/right hand combination. A big uppercut followed by a barrage of shots forced Sam to the canvas again in the same round. With the fight already in his pocket, Shakan did not get careless in the third and controlled the action from the outside moving and picking his shots to cruise to a unanimous decision by scores of 30-25, 29-26 and 30-25.

Unheralded late replacement Georgii Bacon more than played his part in the tournament and positively impressed with his competitive attitude. He knocked Joseph down with a right cross within 30 seconds of the opening round and kept scoring heavily with both arms but got over eager allowing Jordan to land

his own right hand and put him down in retaliation. It was Bacon again to draw blood first in the next session by catching his opponent early and swarming all over him but leaving himself open to the counter. Joseph chose wisely to box in the final round but Bacon would not leave him alone and dragged him into a brawl which suited him more and earned him a split decision by scores of 29-28 and 30-28 with one judge giving it to Joseph by 28-29.

After a cagey and uneventful first round, Spelman decided to go for broke in the second but got caught and touched down with a glove to receive a standing count. He then regrouped and tried a more cautious approach which paid off as he knocked down McIntyre with a right hook. They both reverted to cagey in the last round and, although McIntyre seemed to have edged it by landing the cleaner shots, it was Dec to secure his place in the final with a majority decision that saw two judges scoring 28-29 for him while the third had it a draw with 29-29.

True to form, Bacon spent the first session pressing the action but Pitters was more effective controlling the pace with the jab followed up occasionally by his right cross. Again, after 1 round Shakan had it all figured out and knocked down Georgii twice with left hooks to the body. Bacon was unable to rise after the second one and the fight was stopped at 2:13.

A very brave Dec Spelman overcame an early knock down in the first to keep coming undeterred for the whole 3 rounds, his face covered in a mask made of his own blood. His best spell was probably in the third where he managed to get through effectively although sporadically but overall Pitters was just too confident and smart. He did not try to impress by going for a third stoppage but offered instead an elusive target putting his natural attributes to good use and firing shots from a variety of angles. A very good technical performance to crown his night of triumph. Shakan campaigned at Cruiserweight prior to this event and will be looking to move forward in whatever division offers the best opportunities at the moment. He surely has the size and tools to excel in both.