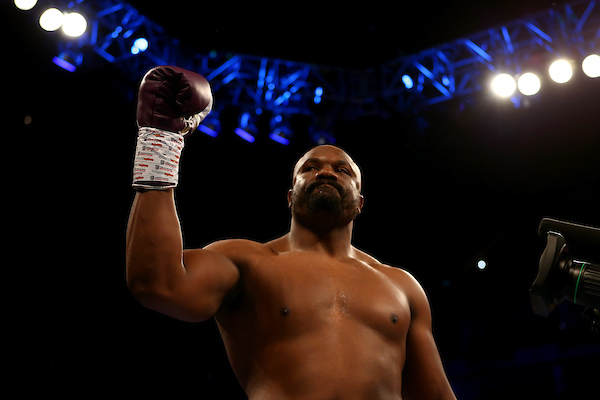 “I like the Oleksandr Usyk fight, he’s mandatory for the WBO so if that can be done, he’ll definitely be fantastic fight.” David Haye.

Following his victory over David Price at the 02 Arena, attention immediately turned to what’s next in the unpredictable story of Dereck Chisora.

The enigmatic Londoner continued his career renaissance, visibly hurting his much taller opponent with a variety of damaging shots on the inside, the pressure and power of Chisora eventually forced Price’s corner into throwing in the towel.

Although a rescheduled contest with Joseph Parker seems probable, Chisora’s third consecutive victory opens up a plethora of opportunities as he continues to revel in the positivity and plaudits of British fans.

After their original contest was called off at the last minute, New Zealand’s former WBO World Champion undoubtedly represents Chisora’s most likely next contest.

A trio of contests against Hughie Fury, Anthony Joshua and Dillian Whyte, mean the 27-year-old has established a strong presence amongst UK fight fans, it’s something that could elevate anticipation for a potential contest with Chisora.

Furthermore, as a former world champion and having only suffered two defeats at the hands of Dillian Whyte and Anthony Joshua, taking on Parker presents Chisora with an opportunity to assert himself as a serious contender for heavyweight gold.

Having conquered the cruiserweight division, Oleksandr Usyk began his heavyweight journey with a victory over Chazz Witherspoon last month, although he is already WBO mandatory, a potential contest with Chisora holds real potential.

His revered footwork and boxing ability mean many have backed the Ukrainian to replicate his cruiserweight success in the sport’s most famous division. Nonetheless, a meeting with Chisora would be incredibly lucrative and ‘Del Boy’ will feel he can utilise his size, pressure and power to take Usyk into deep waters.

In the aftermath of his victory over Price, Chisora’s Manager David Haye told Sky Sports: “I like the Oleksandr Usyk fight, he’s mandatory for the WBO so if that can be done, he’ll definitely be fantastic fight.”

When questioned on how his fighter can propel himself into the world title picture, Haye added: “If he fights Usyk, who is the mandatory then he is right up there. For me, getting Dereck into a heavyweight title shot is what he wants, so I’m going to do all I can to get him there.”

When Chisora’s current manager, David Haye was guiding the career of unbeaten British prospect, Joe Joyce, ‘The Hayemaker’ regularly vocalised the possibility of a London derby between the tough veteran and the former amateur star.

Despite talk of the fight dwindling in recent months, as both fighters’ careers have gone in different directions, down the line the prospect of the two squaring up in the nation’s capital is an incredibly enticing prospect.

Given that an array of VADA test failures obstructed him from a scheduled world title tilt against Anthony Joshua, this fight seems extremely unlikely. However, since the New Yorker’s golden ticket fight was toppled, heightened levels of trash talking between himself and Chisora have ensued.

Whilst Miller’s actions may mean Matchroom isn’t ready to push the fighter into a big fight yet, the enigmatic nature of the two fighters may mean this fight is eventually too fruitful to turn down.

Since he suffered his first defeat at the hands of Dillian Whyte last July, dangerous Colombian Oscar Rivas has remained inactive. Nonetheless, he boasts a positive reputation and a top ten ranking with the WBC, ‘Del Boy’ may see a victory over Rivas as his ticket to a world title.