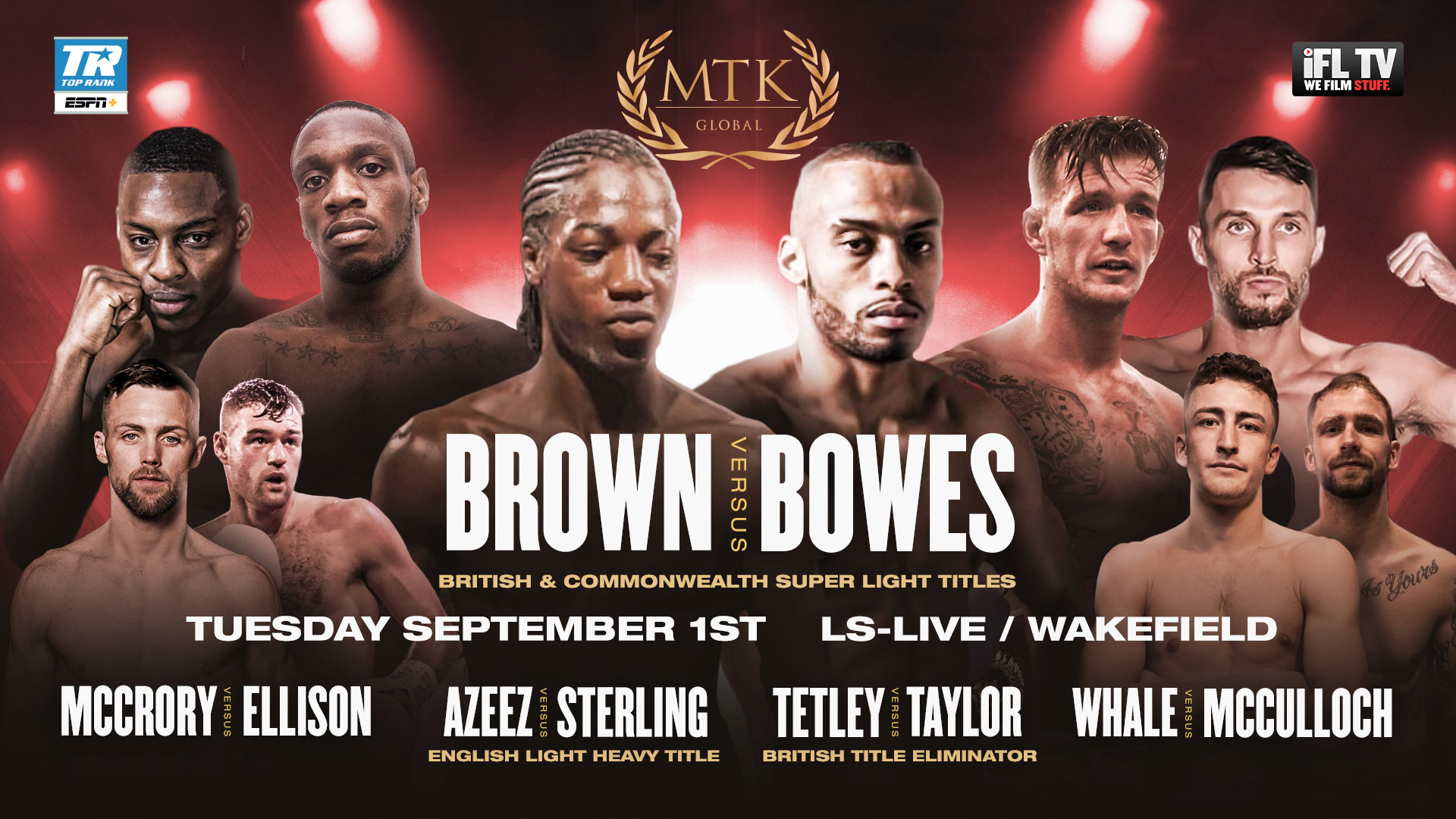 The events will be held behind closed doors at the LS-LIVE in Wakefield, and will be broadcast in the US on ESPN+ in association with Top Rank, and worldwide on IFL TV.

The opening show, which takes place on Tuesday 11, August sees Jono Carroll look to continue his momentum following an impressive win over Scott Quigg, when he takes on the always-entertaining Maxi Hughes.

Undefeated rivals Sahir Iqbal and Maredudd Thomas meet in what is set to be a really exciting bout for the WBC Youth welterweight crown, and Dublin ace Pierce O’Leary will look to continue the perfect start to his professional career when he steps up in class against fellow unbeaten fighter Harry Limburn.

The stakes are high in the second event on Tuesday 25 August, which is topped by a clash for the vacant WBO European welterweight title, with Lewis Crocker colliding with former Southern Area champion Louis Greene.

The much-anticipated return of British and Commonwealth bantamweight king Lee McGregor takes place on the bill too, facing a tricky test at 122lbs against Southern Area super-bantamweight champion Ryan Walker.

Rounding off a deeply exciting card, elite prospect Blane Hyland returns to action, while amateur sensation James McGivern makes his professional debut, with opponents to be announced for those two fights.

Fireworks will be guaranteed on Tuesday 1 September, as the third event marks the highly-anticipated British and Commonwealth super-lightweight title fight between Akeem Ennis Brown and Philip Bowes.

Unbeaten sensation Dan Azeez defends his English light-heavyweight title against Andre Sterling, plus there is a cracking showdown at 147lbs as undefeated Darren Tetley fights Liam Taylor in a British title eliminator.

Concluding the bill is a clash between Padraig McCrory and Mickey Ellison, while rising star Elliot Whale also returns in his hardest bout to date against Corey McCulloch.

“There are a lot of unique challenges to pulling a card together in the current climate but these fifteen matches guarantee some cracking fights.

“The remit was to make as many quality 50-50s as possible and the fact we’ve been restricted to matching domestically only adds to the intrigue of the contests. It’ll be action from the first bell to last.”

“Sean McComb and Siar Ozgul always bring excitement, so having them face each other is certain to lead to fireworks, and then we have two outstanding 50-50 fights as Craig MacIntyre faces Darren Surtees, and Sahir Iqbal goes up against Maredudd Thomas.

“Pierce O’Leary rounds off our first show, and he has looked tremendous in his career so far, so we can’t wait to see him back in the ring.

“Our second card on August 25 is just as packed, with Lewis Crocker competing for his first title in a terrific fight against Louis Greene, and it’s great to have Lee McGregor back too after his brilliant bout with Kash Farooq in November.

“Gary Cully against Kieran Gething is an extremely interesting fight that I can’t wait to see unfold, and the fans will see two stars for the future when James McGivern and Blane Hyland are in action.

“On September 1 we finally see the British and Commonwealth title fight between Akeem Ennis Brown and Philip Bowes, and those two have been desperate to face each other.

“Dan Azeez continues his impressive progression in a top fight against Andre Sterling, and Darren Tetley vs. Liam Taylor is an exceptional contest between two fighters on the cusp of the British title.

“We then have another excellent 50-50 battle as Padraig McCrory faces Mickey Ellison, plus Elliot Whale is back after two stellar performances in his career so far.”

PETER MCDONAGH WEIGHS IN ON FURY, JOSHUA, USYK TRIANGLE AND EXPLAINS WHY HE’S IN PAKISTAN!

BBTV CRIBS GYPSY EDITION | AT HOME WITH THE GORMANS | PART 1

“IT WILL BE A DEMOLITION JOB!” CONAH WALKER CONFIDENT AHEAD OF ENGLISH TITLE CLASH WITH SAM ANTWI