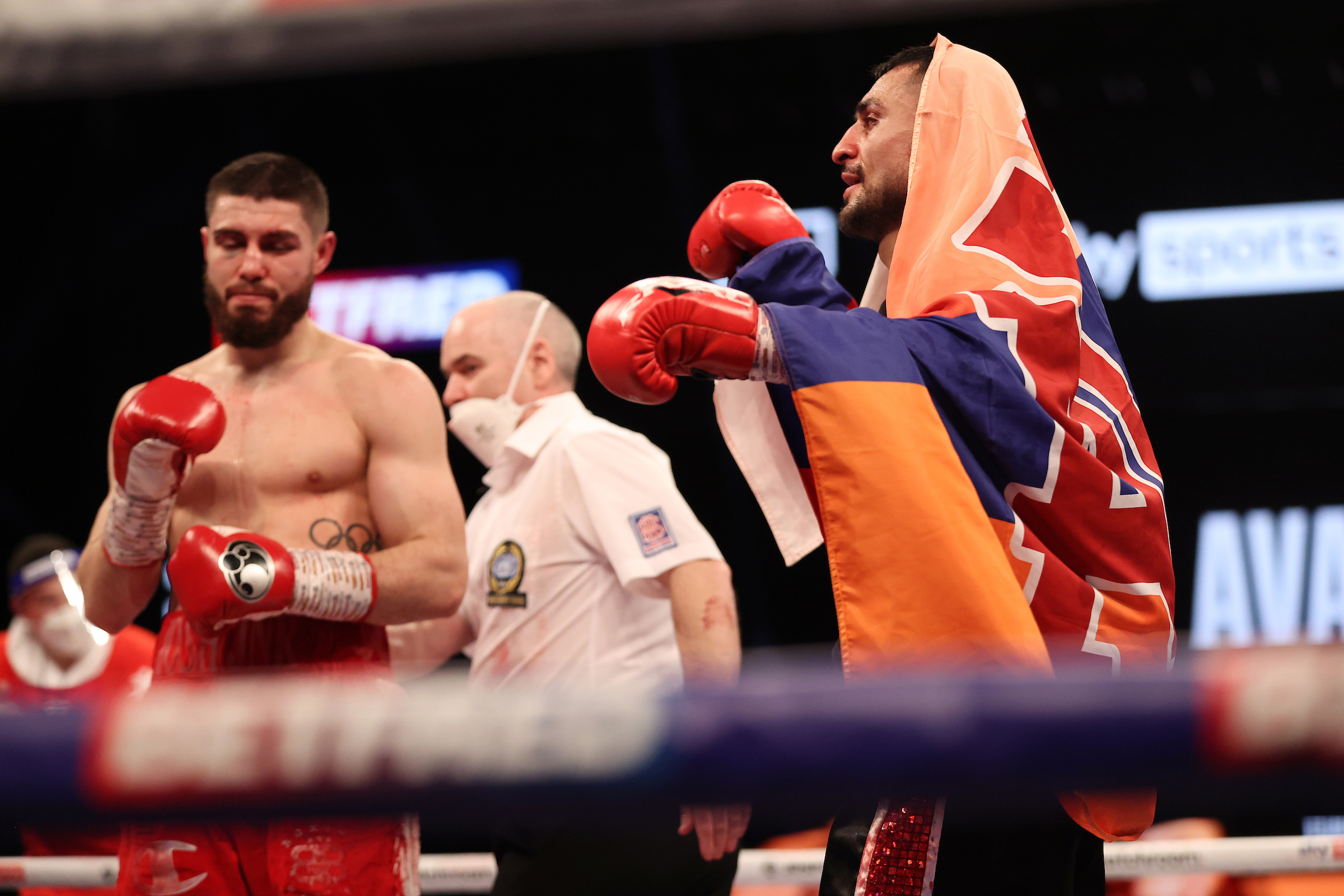 In a fight years in the making, David Avanesyan proved too strong for Josh Kelly as he defended his European title in six rounds.

Kelly made a rapid start to contest, unleashing razor-sharp combinations from close quarters, fizzing home a left hook that caused the champion to wobble in round two.

As Kelly began to bleed from the back of his head Avanesyan edged into the bout, honing in on the body in a bid to slow the blistering former Olympian.

The tireless Russian marched forward as Kelly continued to call on his lightning speed in a bid to navigate through the gruelling war.

As the pace of Kelly slowed the desire and pressure of Avanesyan intensified and he made the Sunderland crumble in round six.

Avanesyan backed Kelly up and unleashed a brutal assault, dropping him twice and forcing Adam Booth to throw the towel in.

The chief support saw a collision of two undefeated prospects as Florian Marku looked immensely impressive as he stopped Rylan Charlton in eight.

Charlton began with aggression as both hammered home venomous jabs, setting the pace for a forceful battle of punchers.

The proud Albanian however, settled into the bout well and sliced home sharp shots from the outside, momentarily stiffening the legs of Charlton with a solid uppercut in the second.

Charlton was saved by the bell at the end of the fourth, as Marku, who continued to showcase a superb portfolio of shots, got through with a speedy right hand to wobble the legs of Charlton.

Typifying the unpredictability of boxing, Charlton’s perseverance paid off in the sixth, as a looping left hook landed and caused Marku to take an eight count. Although he never looked overly rocked, the shot hindered the swagger of the Albanian.

Wearing the wounds of battle, Charlton sought to continue the momentum in the seventh, but Marku rallied back as the pair traded powerful punches.

A damaging body shot marked the beginning of the end in the eighth, as Marku unleashed a barrage of big punches and the corner of Charlton mercifully threw in the towel.

Robbie Davies Jr suffered a setback as he lost a tight majority decision to Gabriel Gollaz Valenzuela in a gruelling battle over 10 rounds.

The Ingle trained fighter struggled to find his rhythm as the Mexican applied the pressure and found a home for his right hand against the southpaw opponent.

Davies Jr continued to endure a turbulent start when Valenzuela clipped him with a big counter right hand and forced him to hit the canvas.

Underlining resilience, the Liverpudlian settled into the bout and became increasingly assured from the southpaw stance stealing rounds with sharp counter combinations.

Although it was scrappy at times, the bout remained engaging as both sought to grapple control from the other, in a give and take tussle.

The lead hand of Davies Jr proved a pivotal weapon as he won a lot of the moments in which he and Valenzuela weren’t exchanging. However, the Mexican did an effective job of enticing Davies Jr into a battle.

Trainer Dominic Ingle was vocal from the corner in urging Davies Jr to stay southpaw and refrain from mixing it with the Mexican.

Valenzuela ended the battle in strong fashion, rocking Davies Jr and sending him into survival mode for the final minute of the fight.

The judges scored the bout 98-92, 98 – 93 and 96 – 94, all in favour of Gill as he continued his momentum after a hugely impressive win over Reece Bellotti in the second half of last year.

Gill looked composed and mature, boxing neatly on the back foot to frustrate his game Mexican opponent, who was made to punch fresh air for much of the 10 rounds.

At the culmination of round five, the relentlessness of Juarez finally paid dividends when Gill was backed up into the corner and forced to weather a barrage of shots, many of which rebounded off the Englishman’s high guard.

Announcing himself as a new prospect in boxing’s most lucrative division, heavyweight puncher Johnny Fisher kickstarted his professional career dispatching Matt Gordon in a round.

The likeable Romford native and graduate of the University of Exeter powered home a right hand causing Gordon’s leg to wilt as he thudded against the ropes.

Fisher’s power proved too much for the Midlander, as he dropped him once again before the referee brought a halt to the bout.