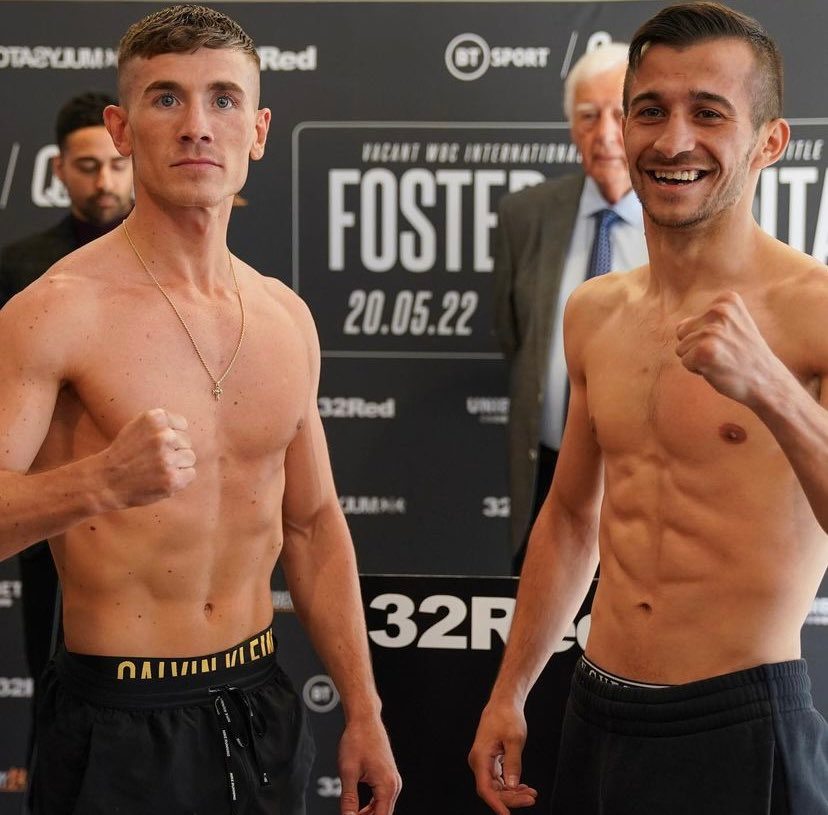 Former British and Commonwealth super-bantamweight champion Brad Foster (14-1-2) successfully made the 122lb limit at Thursday’s weigh-in for his ten-round clash with Romania’s Ionut Baluta (14-3-0). The latter weighed in one pound over the limit first time around but was confirmed to have made weight at the second time of asking later on, leaving no further hurdles in the way of the WBC-sanctioned contest on Friday at York Hall, Bethnal Green.

Walsall’s Foster suffered the first professional defeat of his career so far, surrendering his British and Commonwealth straps in a unanimous decision loss to Jason Cunningham, with the Doncaster man’s EBU European super-bantamweight title on the line. Seven months on, the twenty-four-year-old Foster looks to get back on the horse as he begins his hunt for major titles once again. Baluta meanwhile is no stranger to British fight fans with three of his last four outings taking place on British shores, winning two before a majority decision defeat to Michael Conlan back in April of last year last time out. The Spain-based Romanian will be hoping to return to winning ways himself as he looks to build on his winning record so far in the UK.

Friday’s undercard sees another clash at super-bantamweight with Liverpool’s explosive Andrew Cain (9-0-0) set for ten rounds versus Luis Moreno (10-2-0) in the chief support. Cain stole the show back in April with a first-round knockout of Pablo Ariel Gomez in Telford, the fight barely lasting thirty seconds following Cain’s detonation of a monster right-hand which turned the Argentine’s legs to jelly as he stumbled across the ring after picking himself off the canvas, referee John Latham waving the contest off. Like Baluta, Moreno has history on our shores having gone eight rounds with Dennis McCann in March last year when he was knocked to the canvas in the final session before losing widely on the cards.

Raven Chapman (2-0-0) will finally make her Queensberry debut in the featherweight division a six, two-minute round contest against Gabriella Mezei (11-29-5) respectively. Chapman spent time with Team GB in Sheffield and looked set to participate at the Tokyo Olympics before the pandemic put everything on hold, leading to the now twenty-eight-year-old taking the decision to turn over and focus her attention on success in the professional ranks. ‘The Omen’ scored the first stoppage of her professional tenure so far last September before going the full six rounds two months later.

Further down Friday’s card, super-featherweight Charles Frankham (5-0-0) takes on Sandeep Singh Bhatti (6-3-0) as he continues his professional assent at 130lbs in a scheduled six-round contest, while 147-pounder Micky Burke Jr (5-0-0) faces off against Ivica Gogosevic (12-42-2) over six rounds. Sticking with the welterweights, Joshua Frankham (5-0-0) is scheduled to face Des Newton (8-24-0) over four rounds, while super-bantamweight prospect Adan Mohamed (4-0-0) takes on Stefan Nicolae (3-32-2) in a four-round contest. Sean Noakes, younger brother of 9-0-0 middleweight Sam, also makes his professional debut in the welterweight division, with Naeem Ali (2-86-1) the first of what Sean will hope to be many opponents to succumb to the Maidstone man’s ferocity inside the squared circle.