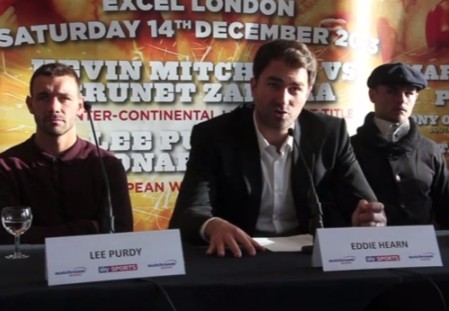 There is a big boxing show at the ExCeL Arena in London on Saturday night. 16 fights will feature on the Mathroom promoted show.

Former British and Commonwealth middleweight champion and world title challenger Martin Murray will take on Belarusian Sergey Khomitsky hoping to end the year on a positive, with a third crack at a world title in 2014 promised for the St Helens boxer in Monaco. Murray has already beaten Khomitsky in 2009 on points and had used him has a sparring partner for his fight with Felix Sturm, should be a clean victory here for Murray.

Recent IBF Bantamweight king Jamie McDonnell is out for the second time in four weeks, when he takes on Spaniard Abigail Medina over 8 rounds.

British Super Middleweight champion Paul Smith was added to the bill earlier this week and will take on Huddersfield’s Alistair Warren over 8 rounds.

Olympic bronze medallist Anthony Ogogo fights for the fourth time in the paid ranks when he faces the busy Trowbridge 20 year old Dan Blackwell in a six rounder.

There are two tasty Southern Area title clashes as Tony Owen defends his Light Welterweight strap against fellow Carshalton man Ricky Boylan, and Ryan ‘Crash Bang’ Taylor meets Floyd Moore for the vacant Lightweight belt. Danny Connor lost to Owen in their October meeting for the title, and he is in an eliminator for the English Light Welterweight belt against Tyler Goodjohn.