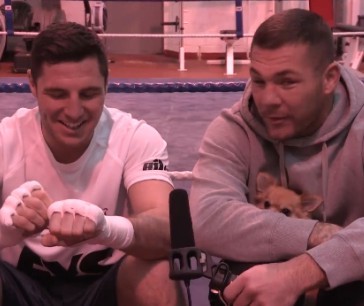 Hull Lightweight Tommy Coyle is back to winning ways after claiming the vacant IBF International lightweight title against John Simpson with a 7th round TKO last November. He will defend that belt on February 22 against Argentinian Daniel Eduardo Brizuela in front of his home fans back at the Hull Ice Rink where he won the belt.

It is all a far cry from July last year, when Coyle was; as his coach puts it, ‘Banjo’d by Derry Mathews! Coyle (17-2, 7KOs) was knocked cold in the 10th round by the Liverpool man. Despite being well ahead in the fight at the time Coyle walked on to a shot and Mathews claimed the vacant Commonwealth strap. Coyle didn’t dwell on the loss, full credit to him he was back in the ring two months later, then two months after that went in with the seasoned Simpson and produced a gritty display to get his career back on track.

In this video Coyles coach former British and European champion Jamie Moore interviews his boxer about the Mathews defeat, his win over Simpson and his next fight against Brizuela.