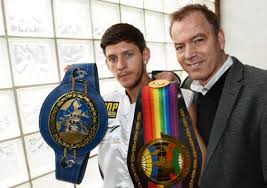 Hobson: “Butler vs McDonnell would be a sensational fight.”

Dennis Hobson can confirm that, as the registered British Boxing Board of Control manager of Jamie McDonnell, the only offer received regarding a potential unification clash with new world champ Paul Butler, has come from Frank Warren.

In a fantastic fight, Butler claimed the IBF world bantamweight title on Saturday June 7 with a controversial points victory over former holder Stuart Hall.  And, with Doncaster’s McDonnell recently becoming the WBA champion, speculation has naturally followed regarding a potential all-British clash between the pair.

Hobson though, has moved to clarify recent developments.

“I have read in the press that Eddie Hearn says he has put in an offer for a Jamie McDonnell versus Paul Butler fight, but the only offer that has been lodged in accordance with the BBBoC rules so far is an offer from Frank Warren,” explained Hobson, who secured home advantage for McDonnell when he won the IBF belt in 2013.

“If Matchroom are serious about putting on this fight, then they should contact me and follow the established protocol. I think it would be a sensational fight, and another great advert for British boxing following on from Froch versus Groves and Hall against Butler in the last couple of weeks.

“It’s important that British boxing uses opportunities like this to build momentum for the sport. I’m happy to look at all offers and options to help make this fight happen, but at present the only official offer on the table is the one from Frank Warren.”