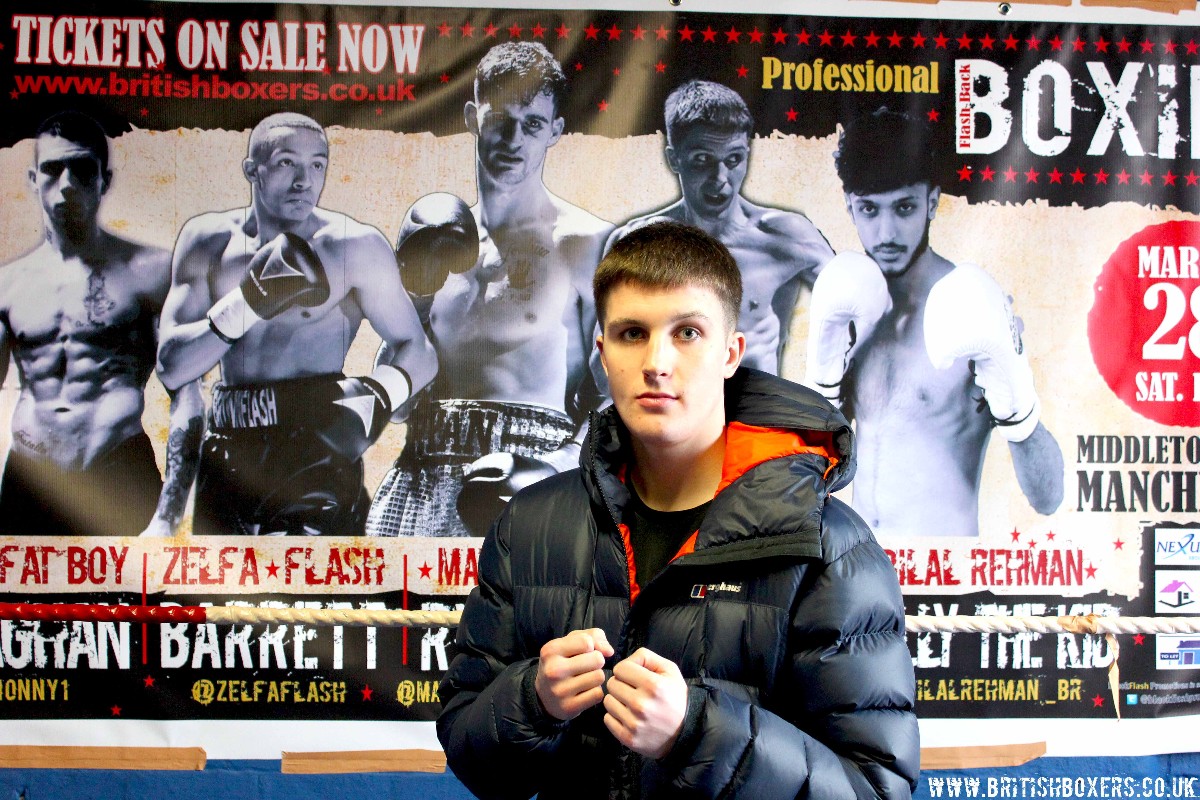 Chavez and Quigg fan ‘Ben’ Mulligan fights like the Hitman

Sean Ben Mulligan will head into his second pugilistic assignment buoyed by the inspiration and confidence of witnessing the brutal efficiencies of many a ring idol on Saturday night in Middleton.

The Salford born boxer cited a list of fighters when quizzed on the subject of his in – ring admiration and stated that he is working hard with trainers Pat Barrett and Paulie Da Silva to emulate positive aspects of their respective styles.

It had been a long frustrating wait for Mulligan top make his pro debut, after various delays, but on January 31st he finally made his bow and impressed many observers with his Ricky ‘Hitman’ Hatton type style.

Sean Ben Mulligan with boxing hero Ricky Hatton, when he was sparring over at the Hitman’s gym: pictured with his coaches Paulie DaSilva (left) and Pat Barrett.

Mulligan is a big Hatton fan and as recently been over at the Hitman’s gym for sparring. “I’m a massive Hatton fan and yeah a few people have mentioned I have a similar style, but I haven’t intentionally gone out to copy Ricky, it is just what feels comfortable for me.” Mulligan told www.britishboxers.co.uk

“I’ve been watching a lot of Julio Cesar Chavez with Pat, to show the best way to be effective when coming forward” I have also watched a lot of both Sugar Ray Leonard and Ray Robinson’s fights to research how they used the jab as well”.

Mulligan heralded a figure much closer to home as his biggest influence however. Bury’s Scott Quigg, himself a former fighter with the famed Collyhurst and Moston boxing stable gets the nod from Ben in this regard. “Scott works the body really well and is a very good come forward fighter, a lot of people don’t appreciate just how good Scott Quigg really is”.

Mulligan chatted openly about his training focus for the fight and expressed a refreshing confidence as to his current ability. “We have worked on a lot in the gym – a lot of head movement and body punching; Pat Barrett has made me more confident in my ability as a fighter to come forward as well as being able to box defensively since turning pro”.

He also alluded to possessing a secret weapon in his preparations for his March 28th battle. “I have been drinking Alkaline fitness water since I began training for this fight and I feel great, I seem to have a lot more energy and it is working wonders for my weight making, I can’t praise it enough”.

Mulligan’s opponent at the time of writing is unknown, something that will present an added dimension to the challenge he faces prior to the fight.
Mulligan however, expressed a likeable confidence that was evident throughout our conversation when asked if nerves were present when training for an unknown quantity.

“ I have a job to do, I can’t be worrying too much about my opponent, I just have to make sure I am working on what I need to in the gym to do everything right in the ring.”

Tickets for Mulligans next fight can be purchased here