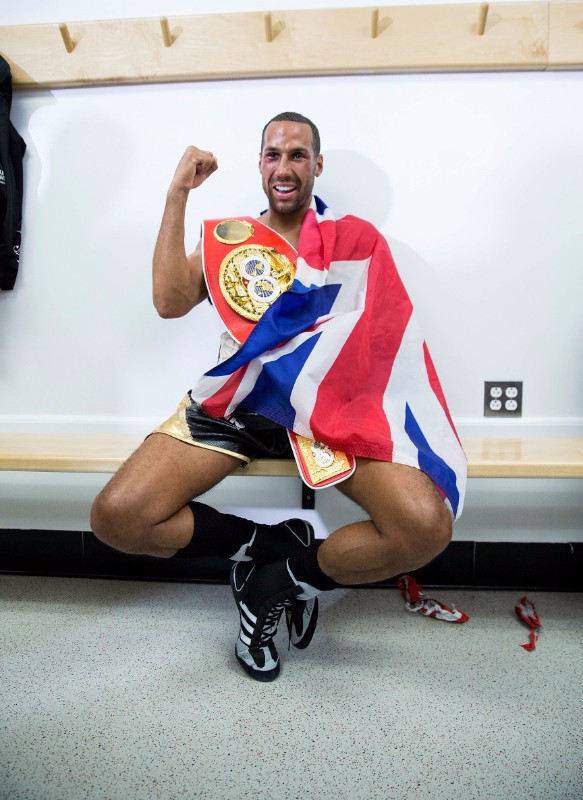 James DeGale MBE created British boxing history last night when he claimed the vacant IBF World Super Middleweight title in Boston against Andre Dirrell – and told his rivals at 168lbs: “I will fight anyone”.

DeGale became the first British Olympic Gold medal winner to land a World title with a superb performance at the Agganis Arena, in a fight that started in explosive fashion for the Londoner.

‘Chunky’ began well in the opening round but then appeared to be hampered by a cut on the right eyebrow early in the second session. Dabbing away at the blood, DeGale touched Dirrell to the body and then unleashed a thunderous left that sent the American to the canvas. Dirrell bounced straight back up but was on unsteady legs and another flurry of punches saw him crumbled to the deck again – and the Michigan man was fortunate that it was late in the round so he could get back to his corner and regroup.

DeGale rocked Dirrell again late in the third round as he dominated the first half of the fight, but to Dirrell’s credit, he not only regained his composure but began to close the gap on the Brit in the mid-to-late rounds.

The visitor sensed he needed to claim the last two rounds to create history though and finished strong – and was rewarded for his part in an enthralling contest with a unanimous decision and his father Leroy placed the World title belt he had craved around his waist to the delight of the travelling fans.

“I am speechless,” said DeGale. “In my whole career, what I have been building up to is winning a World title and I have finally done it. It is an unbelievable feeling. I have made history, I am the first British Olympic Gold medallist to become a World champion.

“I am super fit, feeling good and I am ready. I am IBF World champion and I intend to keep this belt for a long time, and add more titles by beating more great fighters.

“I was surprised he managed to get up from that shot so credit to him for that. I didn’t want to just steam in and try and blast him away. I stayed composed and assured and although he got back into the fight I always felt in control, my fitness was great and I had more gears to go through.”